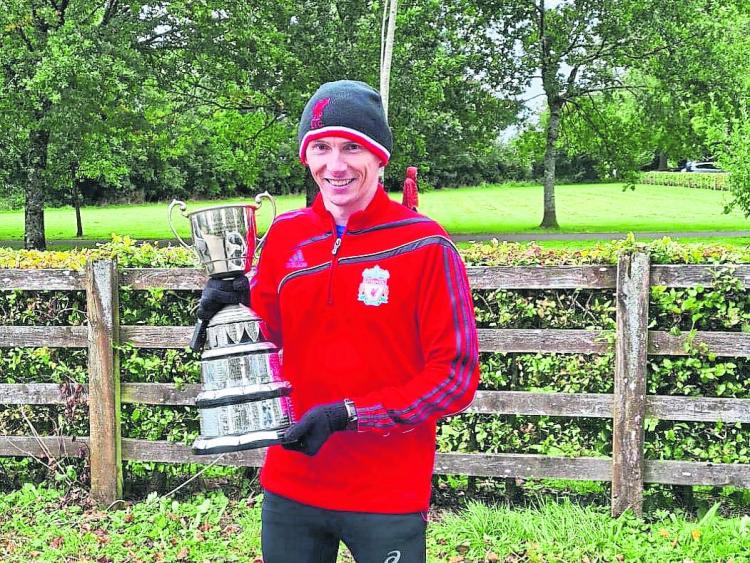 How long are you running with West Limerick AC?

MY first race with West Limerick was the County Novice Cross Country in 1997 where I finished 2nd behind teammate Bryan Hartnett.

Did you always have an interest in athletics?
YES, I loved watching local races when I was small like the 10km festival race in Newcastle West and when I was very small in the late '80’s I remember Tom Brouder Snr calling to my house to watch the Dublin Marathon on television with my Grandfather, all these things grew my interest.

How did you start running?
WHEN I was younger I played a lot of soccer with Newcastle West AFC and this was my main sport. I might not have been the best player on the team but I was always one of the fittest.

When I started running it was with Coolyroe AC and it was tough going at the start because I was up against lads that had been training a lot longer than me and Coolyroe were one of the best clubs in Munster at the time.

I had gone to a few County Cross Country races and had just missed out getting on the team but for the Munster I managed to make the team.

A few days later Jimmy Creedon called up to the house and gave me my first Munster medal.(Little things like this mean a lot to a young fella). I stuck with it after that but started taking it seriously when I went to secondary school.

Who influenced you in your running?
WHEN I was younger Breda O'Sullivan was a coach for Coolyroe and she guided us to lots of good days with the club and school.

When I got back to running around 2005 Joe Chawke was and still is brilliant to me. But down through the years I’ve been blessed with great coaches like Tom Ruddle, John Scanlon and Ger Cremin.

Have you coached in West Limerick?
YES, in 2013 I became head coach for adults and juveniles in the club. During this time myself and Gary Wilmott started up the Juvenile section.

We also got group training going in Newcastle West on Tuesday evenings for kids and adults. I was head coach for 4 years but stepped down because of other commitments but both are still going strong.

Most highlights have come as part of teams though and I have ran on some great teams with great runners.

Down through the years we have won the Munster half marathon, Munster novice road, Munster Intermediate Cross Country and 7 County senior Cross Country titles to name a few.

The County Senior Cross Country is the main race for me every year and it was great to win it this year only problem was we didn’t get to drink out of the Cup.

What's your advice for anyone thinking of taking up running?
GIVE it a go, you won’t regret it. The best thing about running is there is a place for everyone.

In West Limerick we have a number of different options within the club from our fit for life group to our group speed sessions and weekend long runs. It’s great to meet up with likeminded people it makes the hard work easier.

So if you are thinking of it just reach out to the club.

Virtual Fixtures
THE Great Limerick Run Virtual Challenge incorporating distances of 5K to Full marathon will take place from 24th December to 1st January. Entry is €20 with €5 going to a chosen charity.

The Milford Hospice 10k will be a virtual run on the weekend of 28th/29th January. Early bird entry is €15 with details on their Website or Facebook page.

The Adare 10K is going virtual next year, incorporating distances of 1,2,5 and 10K with the ability to upload times to Myrunresults.com.

Entry fee is €10 which will go to the Club and one can run or walk one or all distances. For more information and to register go to westlimerickac.ie or Myrunresults.com.