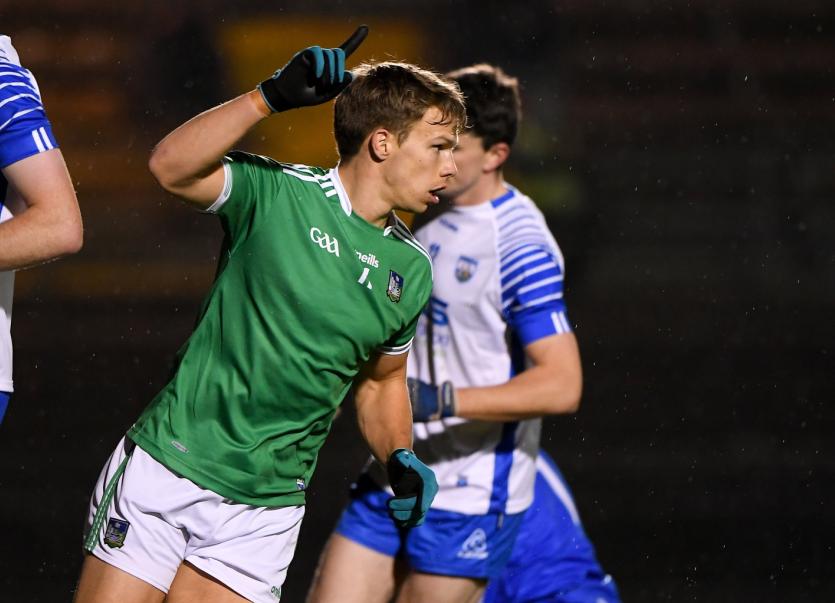 THE Limerick footballers continued their impressive 2020 season with victory over Waterford in the opening round of the Munster Senior Football Championship.

In Fraher Field in Dungarvan this Saturday evening, Limerick were 2-14 to 0-9 winners over Waterford in the provincial SFC quarter final.

Limerick now advance to the Munster semi final next Saturday (November 7) against Clare or Tipperary in the Cusack Park in Ennis or the LIT Gaelic Grounds.

This win over Waterford ensured Limerick gain victories in successive Munster SFC campaigns for the first time since 2009-10.

It was an opening half in which Limerick scored just one point in the final 20-minutes action - the men in green were 2-4 to 0-1 ahead on 16-minutes.

Driving wind and rain arrived mid-way through the opening half to slow down the scoring and Limerick were to score just once after the first half water break.

All started so well.

Conor Murray opened the scoring for the home side but then Limerick dominated.

Iain Corbett again started in attack and he added a quick point as Limerick set off on a run of six successive scores.

Tony McCarthy and Hugh Bourke had points and the lead was 1-4 to 0-1 after 14-minutes.

Then came the second goal - Enright palming to the net after an assist from Bourke, who was played into space by a delightful lengthy kick-pass from Corbett.

Thoroughly deserved, Limerick were now 2-4 to 0-1 ahead but were playing with the aid of the breeze into the dressing room end in Fraher Field.

Sixteen minutes without a Waterford score was ended by Murray and it was 2-4 to 0-2 at the water break.

In a half where the sides had three wides each, Cillian Fahy was to score the only Limerick point in the final quarter - on 30-minutes.

Limerick were still nine points clear but Jason Curry and Darragh Corcoran had late Decies points to leave the scoreboard 2-5 to 0-4 at the break.

Seven points clear at the interval, Limerick resumed to face into the elements with Iain Corbett at centre back.

Waterford did enjoy an improved share of possession in the resumption but kicked six wides in the opening 10-minutes of the new half.

Down the other end Gordan Brown had the only score of the early minutes in the second half to move Limerick out to an eight point advantage.

After soaking up early pressure Limerick rattled off three scores before the second half water break - Bourke and Sean McSweeney moving Limerick 2-9 to 0-4 ahead and 17-minutes to play.

Cian Sheehan and Seamus O'Carroll were introduced for the final quarter and O'Carroll was on the mark to help Limerick out to an 11-point lead with just over 10-minutes to play.