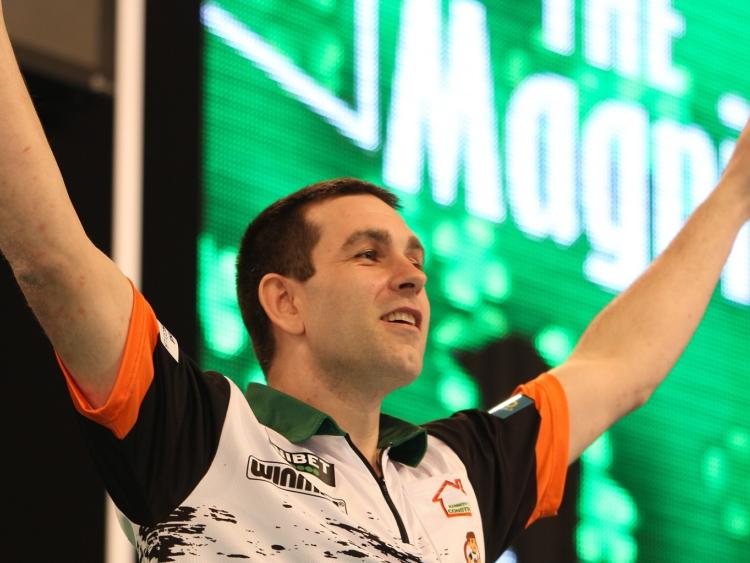 Cappamore's William O'Connor has powered his way into the quarter-finals of the 2020 Unibet European Championship Picture: Stephen Lee/PDC

LIMERICK man William O'Connor has powered his way into the quarter-finals of the 2020 Unibet European Championships in Germany.

O'Connor only came into the event as 32nd seed in the absence of Glen Durrant following a positive test for Covid-19.

The Limerick man took full advantage of his opportunity when following up on his opening round victory over number one seed Joe Cullen on Thursday evening when beating Hughes on Friday afternoon.

O'Connor took a firm grip on the match from the outset racing into a 5-0 lead in the best of 19 leg contest.

The Limerick man moved 9-3 ahead after claiming the 12th leg against the throw, with an excellent check-out of 138.

William O'Connor rounds off a dominant 10-3 victory over Jamie Hughes, sealing the win with an even ton finish and the Irishman is into the quarter-finals!

O'Connor, who averaged over 95 for the match, then closed out the contest with a 100 finish.

It will be O'Connor's second major ranking quarter-final in PDC Darts.

Following his victory, O'Connor told ITV4: "It's a huge opportunity to even be here. Like I said, I shouldn't even be here. Only for Glen Durrant, I wouldn't be here.

Hughes may have been struggling all afternoon but he produces a stunning 122 finish on D7, but is it too late?

"Every round is a bonus to me and I am going to keep pushing the point, keep putting the pressure on and hopefully keep making strides.

"I can definitely take some positives from that game and bring them to the next round.

"Early on I didn't play well and Jamie didn't play well. I have been in those positions before (building up a big lead) recently enough against Dave Chisnall and against Daryl Gurney and they came right back into the games.

Willie O'Connor leads an out of sorts Jamie Hughes 5-0 as the pair head into the interval... pic.twitter.com/CXzxTA6Yck

Thirty two of the world's top stars are in action at the prestigious event in Germany this week. The competition boasts a total prizefund of stg£500,000, with the winner on Sunday evening pocketing a cool £120,000.

A surprisingly one-sided opening game of the day sees William O'Connor become the first player to reach the quarter-finals. pic.twitter.com/NJKjQxle2e

Saturday will see the quarter-finals played from 7pm Irish time, before the semi-finals and final take place on Sunday night.