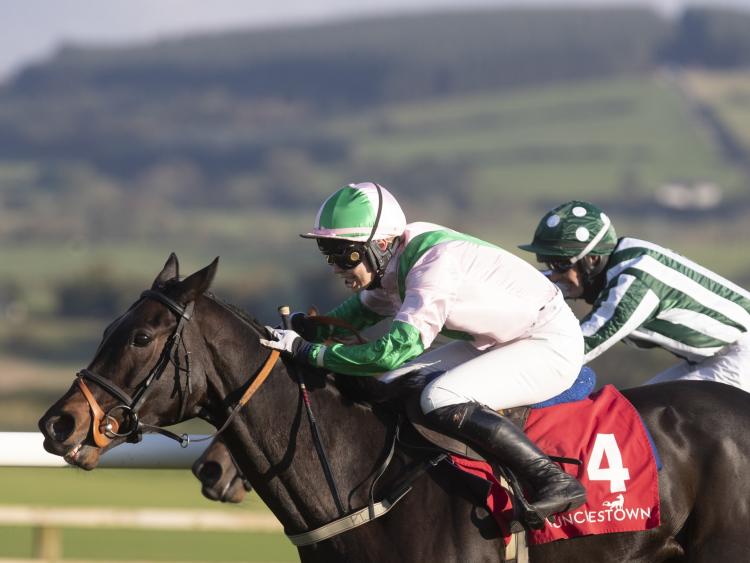 BALLINGARRY jockey Billy Lee became the fifth jockey to reach the 50 winner-mark for the season when landing the 10f handicap on the William O’Meara-trained Noble Music at Cork on Tuesday last.

The 9/2 favourite raced to an easy four and a half-length win for owner Emma Kennedy from the Tony Martin-trained Dundory, a second winner for the Nenagh trainer.

Castlemahon jockey Mark Enright rode an even easier winner as the Ronan McNally-trained Dreal Deal completed a hat-trick in the second division of the of the 10f handicap.

The five-year-old hardly came out of second gear as he justified odds of 4/9 favourite, winning by three and a half lengths from the Jim Bolger-trained Poster Child.

Limerick handler Austin Leahy was among the winners at Punchestown on Wednesday where the JP McManus-owned Wait Here took the 2m handicap hurdle.

The 10/1 chance won by a length and a quarter from the Edward Cawley-trained Breezy Bell under Simon Torrens.

Askeaton jockey Aine O'Connor was a late replacement for fellow amateur rider Pat Taaffe, side lined with the ‘flu, on Any Given Sunday in the bumper and she made the most of the opportunity when getting the well-backed 11/2 chance home narrowly from the Emmet Mullins-trained Sin A Bhfuil.

The Tom Taaffe-trained winner scored by half a length in the colours of Fitri Hay.

Meanwhile, Billy Lee rode his second winner of the week when taking the opening division of the 7f handicap at Dundalk on Friday night on the Kevin Smith-trained Jackmel.

The 4/1 chance held on by a short-head from the Sarah Lynam-trained Royal Scholar.