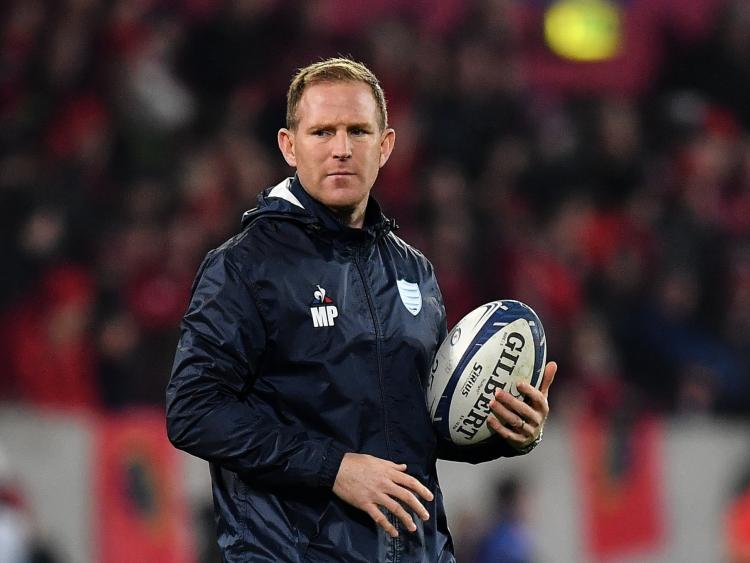 THE similarity with Munster is obvious for Racing 92 attack coach Mike Prendergast this weekend. Just like the Irish province, the French outfit will be hoping it's a case of third time lucky when they face-off against Exeter Chiefs in Saturday's Heineken Champions Cup final at Ashton Gate Stadium, in Bristol, 4.45pm.

Racing 92, who also include ex-Munster players Donnacha Ryan and Simon Zebo in their squad, will be appearing in the showpiece fixture for a third time having lost to Saracens in 2016 and then Leinster in 2018.

A highly regarded coach, Prendergast joined the backroom team at Racing 92 in the summer of 2019 from nearby Stade Francais where he was backs coach.

The Racing 92 squad is spending time in Corsica this week as they finish off their preparations for next Saturday's big showdown with the Gallagher Premiership finalists, the Chiefs.

Prendergast told Leader Sport: “We're in Corsica from Sunday and we will fly then directly to Bristol.

"We are fortunate that we have a good group there in terms of our culture, our atmosphere and the boys like spending time together. It will really focus what is ahead of us.”

The camp in Corsica will allow the Racing 92 squad get out of Parish which has, just like Ireland, seen an increased number of Covid-19 cases in recent weeks.

As with so many major sports competitions around the world, France's Top 14 2019/2020 season was cut short last term by the coronavirus.

Mike Prendergast recalled: “When the virus kicked in, at the end of last season, it came so quick. We were preparing to play a game I remember and like every team in every sport, the virus rocked up and cut short the season.

“From a living point of view we are in Paris. At the time my wife was pregnant, we've had another girl since and we already had two kids.

“We are living in an apartment which was quite tight with no outdoor space or anything. We had no garden.

“We were at full lockdown straight away. The only things open were places selling necessities.

“I remember ringing home talking to people and telling them that they should be grateful that they had that outdoor space and to enjoy it. Look, for everyone it was very difficult. As time went on it gradually started opening and went back to near normal.

“I had about three months between last season finishing prematurely and this season's pre-season commencing.

“Within that you could only work through Zoom and the likes. It was conference calls with staff and stuff. I suppose like every coach you use your time to upskill yourself.

“I had good chats and good conversations with a number of coaches all over the world and then I spent time listening to rugby and other podcasts.
“From a family point of view you have plenty of time with them which was a positive, albeit in a very small space for a couple of months. Ya, that is what happened.

“To come back then for training during the summer and get back into it was great.”

When rugby resumed, Racing 92 succeeded in beating Clermont Auvergne in the Heineken Champions Cup quarter-finals, before overcoming a powerful Saracens outfit in the semi-finals.

The two ex-Munster players, Donnacha Ryan and Simon Zebo have been key figures in Racing's march to a third European Cup final.

Prendergast said: “You have a guy like Simon (Zebo) who is an incredibly positive person, always with a smile on his face. He enjoys himself, he enjoys his rugby, works hard.

“The quarter-final was his first game for six months, obviously a lot of guys hadn't played with Covid-19, but he didn't play any of the pre-season games, he had been injured a lot of last season and to turn up and perform the way he did shows a lot about him mentally and as a rugby player. He brings a huge amount of positive energy.

“You have Donnacha Ryan who I would have played with and known for a number of years. He is massive over here, he is huge for us.

“Obviously, his rugby intellect is way up there, he's a very smart guy, very smart when it comes tactically to rugby and what not.

“Donnacha is effectively like another coach so he is upskilling, for example, all our line-out callers over here and it is something that will stay with him for a long time now. We are blessed. He is a very popular guy within the squad because he works hard, he is very honest.

“You have to be doing a lot right when you are 36 or 37 and still playing in European Cup quarter-finals, semi-finals and playing in Top 14. He has been a massive success story over here.”

So what would it mean to Prendergast and Racing 92 to lift the biggest trophy on offer in European club rugby on Saturday?

“It would be massive for the club to win this weekend, for the President (Jacky Lorenzetti) it would be huge. There are lads there who have lost two finals already, there are a number of lads who lost one final, for them it would be huge.

“For me, to be part of that, would be massive. They don't come around too often, but for the boys, I would be more happy than anything.”