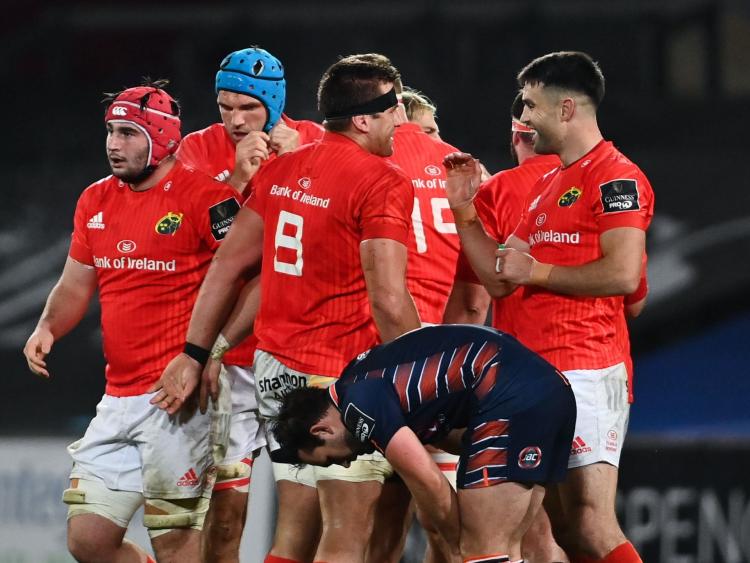 Two confirmed cases of Covid-19 within Munster's senior squad last week resulted in the province being forced to cancel scheduled training sessions on both Tuesday and Thursday.

The team's on-field preparations for the fixture with the Scottish side in the days leading up to the game was confined to the Captain's Run on the eve of the fixture.

Afterwards head coach Van Graan said: “It’s very tough to manage it, but I think we all adapted and that’s one of the goals we set as a group for the year ahead because nobody knows what is going to happen.

“We had to adapt from Monday evening onwards and we kept everyone informed. We hoped to have gone back on Thursday morning but some of the tests were delayed.

“It was the first time ever I announced a team over Microsoft Teams, but we had that at 7:30 on Thursday evening because that was only when we knew that certain guys were unavailable.

"All credit to the staff and the players, we only had one captain’s run on Friday morning and a brilliant result against a top quality side, the guys that won the group last season.”

“Very happy about that win, a real testament to our fitness. We said this game would go right down to the wire with the quality opposition we faced tonight and a special mention to Denis Logan our head of athletic performance, this was his last game for Munster Rugby and he’s created a very fit team with his team so very glad about that 80-minute performance.”