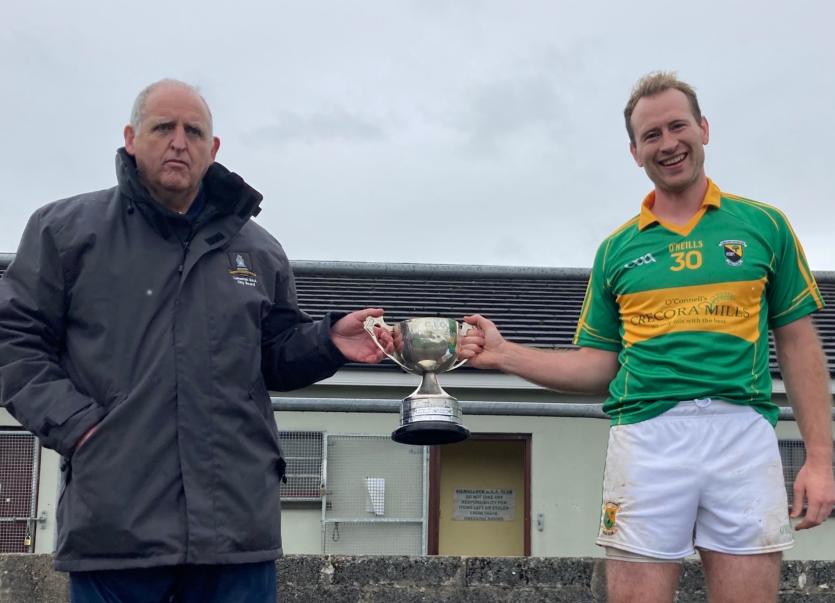 CRECORA-Manister outgunned Monagea 1-11 to 0-11 to capture the county junior A football title after an absorbing final in Kilmallock on Sunday.

Skipper Mike McCormack's early goal set them on their way and, despite falling behind for two minutes during the closing quarter, it proved to be the difference between the sides at the final whistle.

In fact, the margin might have been greater had they settled for increasing their half-time lead taking the point rather than going for another killer goal but, with McCormack directing operations from the
mark, they recovered their composure to exploit the speed of their front men and wrap up a title that was theirs for the taking.

Knocked out of their stride early by the goal and struggling to win possession in the middle, Monagea never got the chance to use the strong wind to build up the lead they needed by the break.

While they threw the kitchen sink at rescuing themselves on the restart, the damage had already been done and the effort taken to gain their brief lead drained  them of the energy needed to withstand Crecora's closing response.

Crecora paid no heed to the wind as they tore in from the throw-in to find Gary O'Connell and his pass off a looping run found McCormack to fist to the net.

Richard Murphy's free followed and a few chances were missed before a shell-shocked Monagea finally after six minutes gained possession in the opposing half for Ciarán Brouder to get them off the
mark.

However, Crecora deflected the pressure by controlling their kick-outs and, by running at the defence, creating the space for Conor Bourke and Shane O'Connell to extend their lead. Jason Brouder pulled one back off a free before the water break only for Bourke to reply as play resumed.

The Manister men could have put themselves out of sight had Mark O'Sullivan not stopped McCormack's rasper. Monagea made the most of their escape as Brouder pointed from a tight angle and then added a pair of frees before Murphy sent one over at the other end to leave Creocra leading 1-5 to 0-5 at half-time.

Just as in the first half, the team playing into the wind took the initiative on the restart with a n instant Jamie Baynham point. Crecora responded by going for goal as Gary O'Connell was stopped on
the line after a goalmouth fumble, then shot inches wide and, after Miche'al Bourke's point, a third chance also went a-begging.

Deflated by the misses, they lost their focus, Monagea steadily raised the tempo and, as Ciaran Brouder and Jason Brouder found the target, trailed by the minimum at the water break.

The rally continued as play resumed, Seám Herlihy equalised and Jason Brouder gave them the lead
for the first time.

Crecora tried to respond but Hail Mary shots missed the target and the game was slipping from their grasp until they were settled by Murphy's equalising free. Destiny beckoned when Karl Moloney restored their lead, Murphy followed up with a free and, despite Shane Normoyle's response and Bourke's black card, Shane O'Connell and Murphy's free added comfort to their lead in added time.

*See this week's print edition of Limerick Leader for more