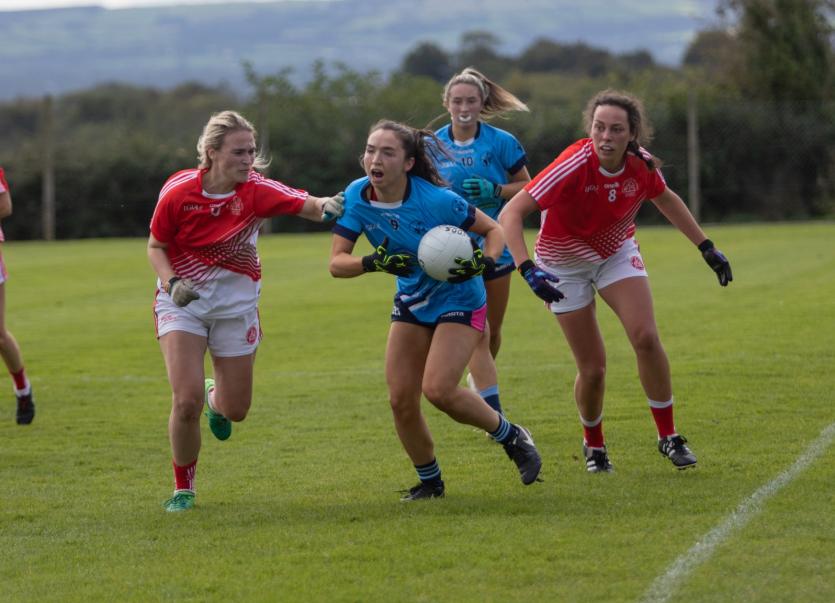 Norma O'Sullivan, of Dromcollogher-Broadford, looks to get away from Aine Ryan and Claire O'Meara, of Mungret-St Paul's, in the Limerick Ladies intermediate football final at Knockaderry on Sunday

DROMCOLLOGHER-Broadford are Limerick Ladies Intermediate Football champions after they beat Mungret St Pauls by a single point 2-18 to 3-14 in Knockaderry on Sunday afternoon.

Laura Hanlon’s goal 20 minutes into the first half had Mungret 1-2 to 0-3 ahead at the end of a lacklustre first half.

But Drom-Broadford - who clocked up eight wides in the opening half – settled into the game after half time with goals from captain Aine Cunningham and Sarah Sheehan securing the one-point victory.

Both sides had played out a thrilling encounter when they met in the group stages - the west Limerick side winning 2-14 to 2-11.

Mungret were beaten in the Intermediate final by Old Mill last season but had beaten Drom-Broadford at the semi-final stage. Davy Lyons’ side reached the final this time around with a hard fought 1-9 to 0-8 win over Murroe-Boher.

After a slow start, proceedings came to life early in the second half.

Sarah Sheehan netted for Drom-Broadford just after the interval to put them four ahead.

Mungret made it a one-point game right before the second half water break when Megan O’Malley raised the green flag after linking up well with substitute Orlaith O’Neill.

In what was a lively 10 minutes on each side of the water break, Cunningham proved her worth as the Drom-Broadford captain put four between the battling sides, yet again – 2-6 to 2-2.

Clare Coughlan brought it back to a goal scoring game but a free from Laura Stack – her second of the game – and an Olive Linehan point from play made it a five-point game, as stoppage time fast approached.

And just as the intermediate title was looking like it was certainly heading towards west Limerick, the impressive Aoife Morrissey gave Davy Lyons’ side a fighting chance.

Her effort rattled the crossbar before hitting the back of the net as Mungret came within two points of Drom-Broadford.

But a Clare Cloughan point – in the dying moments – ultimately proved too little too late for a resilient and spirited Mungret side.