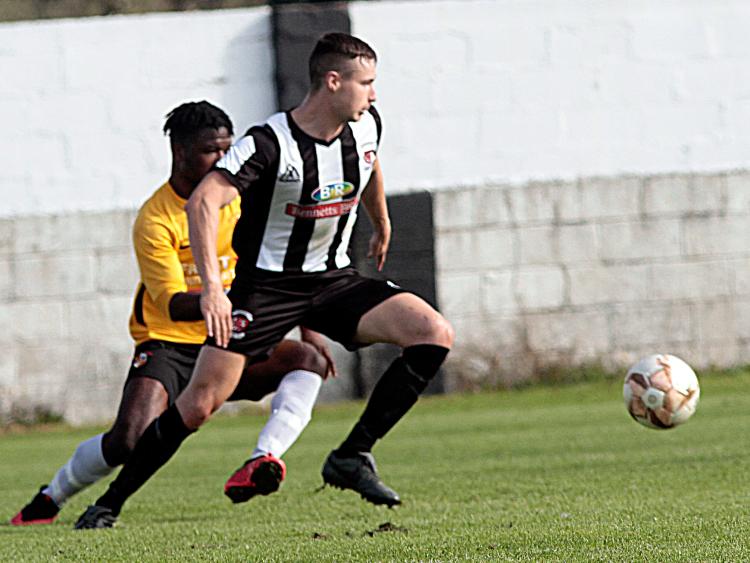 Dermot Hughes, of Janesboro, wins possession in their LDMC Premier League fixture with Aisling Annacotty at Pearse Stadium on Sunday

AISLING Annacotty moved to within a point of League leaders Ballynanty Rvs in the Premier League following a 4-2 win over Janesboro at Pearse Stadium on Sunday morning.

Many (including the author) thought Aisling would prove too powerful up front for a young ‘Boro outfit and while we were eventually proved correct, it proved a real dogfight for the visitors.

Boasting five players ex ‘Boro players, along with most of the management team, Aisling came into the tie strong favourites but were rocked back on their heels when the home side took a two goal lead. To their credit they did not panic, slowly working their way back into the tie.

The loss of a player to a red card was a further blow to the home side and tied at 2-2 late in the game it looked like they would hold on for a well deserved point.

However the introduction of ace poacher and former ‘Boro favourite Keith Mawdsley proved their undoing as the striker scored twice to send the points to Annacotty.

Ironically, Aisling will be delighted with the spoils but you feel Jason O’Connor, Conor Lynch and Dave Brown will take more positives from the game that Shane O’Hanlon.

The home side showed they can mix it with the best and despite their relative youth they were not overawed or bullied by their more illustrious opponents.

Their over exuberance in the opening half earned them a number of yellow cards that came to cost them in the end.

Regardless, they can build on this as they continue to improve.

Aisling looked out of sorts particularly in the first half when the pace of Dermot Hughes had them in panic mode at times.

Luckily for them their experienced performers steadied the ship until the goals arrived.

The speedy Dermot Hughes caught the Aisling defence unawares after seven minutes as he cut in from the right and coolly slotted the ball past John Mulready from a tight angle.

Ten minutes later the Boro man struck again, this time latching onto a Niall McNamara pass to leave the defence for dead before rounding Mulready to score a superb goal.

Ten minutes before the break Aisling were back in the game. Brendan O’Dwyer’s delivery from a free kick saw Dylan Sheehan rise a cushion a header across goal where Thomas Clarke forced the ball over the line.

Boro were reduced to ten on 52 minutes when Niall McNamara received a second yellow card and three minutes later they conceded the equaliser. Conor Coughlan let fly from outside the box. Keeper Vincent Browne saved but the rebound fell to Shane Stack who fired home.

Aisling took the lead when Aaron Murphy was fouled in the area. The spot kick saw Shane Clarke’s effort rattle the crossbar but Keith Mawdsley pounced on the rebound to score.

Mawdsley scored his second with a minute remaining when he raced through to collect Coughlan’s pass and squeeze it past Browne.

Geraldines, looking to build on last weeks good performance had the misfortune to meet a bang in-form Fairview side in Garryowen on Sunday.

The FAI Champions showed no ill effects from their celebrations of the last week and boasting four new starters along with another new addition among the subs were on the front foot from kick off.

Geraldines matched their opponents until the deadlock was broken after fifteen minutes when Ross Mann was pulled back in the area and Clyde O’Connell converted the resultant spot kick.

The visitors upped the temp and added a second when Adam Frahill played Sean McSweeney in to open his account for the Blues.

Before the break the game was killed off. Former St Michaels favourite Russell Quirke marked his debut with a fine delivery for Jeffery Judge to nod in number three.

The home side put up a stern fight in the second half but conceded again when Dylan Kelly- Higgins supplied Eoin Duff to score.

Sean McSweeney completed the scoring with his second, a sublime chip over the keeper to wrap up the win.

While it is a bit early in the season to tag teams as relegation, there was no doubt tht Sunday’s clash between Prospect and Mungret in Cals Park took on more significance as both teams looked to climb up the table.

Mungret took the lead on fifteen minutes when Keith Storan netted. The home side battled back and were level by half time courtesy of Trevor Hogan.

Just after the break Kian Barry’s shot was deflected past keeper Wayne Mullally to restore Mungret’s lead but again fought back to level through Eddie Brazier.

A couple of superb saves by Mullally kept Mungret at bay and a quick bouble from Hogan to complete his hat trick tilted the tie Prospect’s way.

Ian Clancy completed the scoring with a long range effort to seal three vital points for Wayne Colbert’s side.