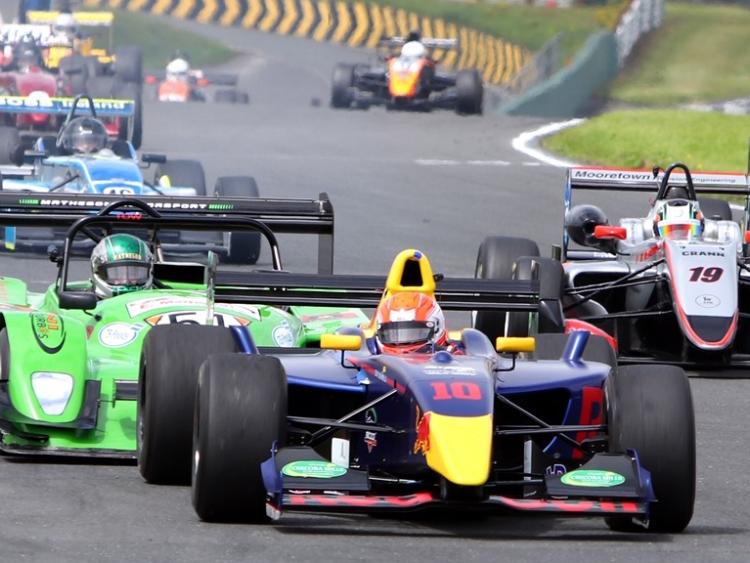 LIMERICK man Paul O'Connell added his name to the Leinster Trophy's long list of illustrious winners at Mondello Park in a COVID-19-impacted race held with no spectators in attendance.

The lack of a crowd was unfortunate given the near perfect bright, sunny conditions for the race, but those who were in attendance (officials, competitors and team members) were treated to a superb battle between Paul O’Connell and Cian Carey that saw Crecora man O’Connell declared victorious after a red flag brought a premature end to the proceedings.

The firm favourite Cian Carey from Dunshaughlin, Co Meath driving a 2017 F3 car was expected to win this comfortably given his vast experience racing abroad in the U.K. and Europe.

In a tightly fought race between the top two qualifiers, O'Connell In an older model F3 had led from pole despite being under severe pressure and a titanic battle ensued for the first 7 laps.

Time and again the cars passed the finish line separated by a couple of feet. However, a red flag came out on lap 9 following a incident involving Galway’s Joe Courtney’s Dallara F308 and as more than 50% distance had elapsed, the race was declared over and the final results determined from the lap prior to the last completed lap, and O'Connell was therefore victorious as he was in the lead at that time.

While the decision to stop the race was not ideal few would deny that the popular Limerick man and two-time Formula BOSS Ireland champion Paul O'Connell was a worthy winner.

A thrilled O’Connell commented after the race: “I’m massively proud to have won the Leinster Trophy. I would say sincere commiserations to Cian as we had a great battle there all the way through the race.

"I know how he feels as I've been unlucky in the Leinster Trophy in the last couple of years, so I have learned that you take your luck when you can get it. To have my name on the same trophy as Ayrton Senna, Mika Hakkinen and Eddie Jordan, among all the best racing drivers in Ireland is a very proud moment especially when I’ve only been circuit racing since 2018.”