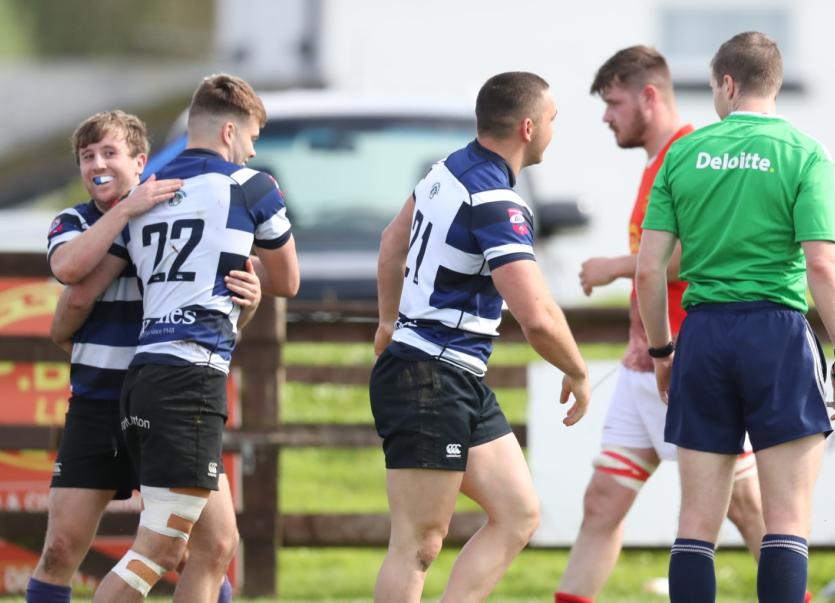 Old Crescent's Jack O'Mahony, number 22, is congratulated by team mates after scoring his side's third try in their Munster Senior Cup win over Cashel at Rosbrien on Saturday

FIVE Limerick clubs will be looking to secure places in the semi-finals of the Bank of Ireland Munster Senior Cup when the quarter-final ties are played this weekend.

There are two all-Limerick down for decision at the quarter-final stage.
Shannon, fresh from their weekend win over junior side Kilfeacle and District, will take on UL-Bohs', who have reached the quarter-finals on the back of recent wins over Nenagh Ormond and Sunday's Well.

In the weekend's second all-Limerick derby, Garryowen FC will host Old Crescent, who earned their last eight spot thanks to wins over Dolphin and Cashel in recent weekends.

The pick of next weekend's quarter-final ties is the clash of arch rivals Young Munster and Cork Constitution at Tom Clifford Park.

Munsters' bid to claim a first Bank of Ireland Munster Senior Cup title in nine years was dashed by competition specialists Cork Constitution who made it back-to-back wins with a hard fought 24-17 final win at Musgrave Park in the 2019/2020 final which was played last December.

The remaining quarter-final clash is an all-Cork affair which will see UCC host Highfield on Friday night.

The semi-finals and final of this year’s Bank of Ireland Munster Senior Challenge Cup will take place on the first two weekends of December.