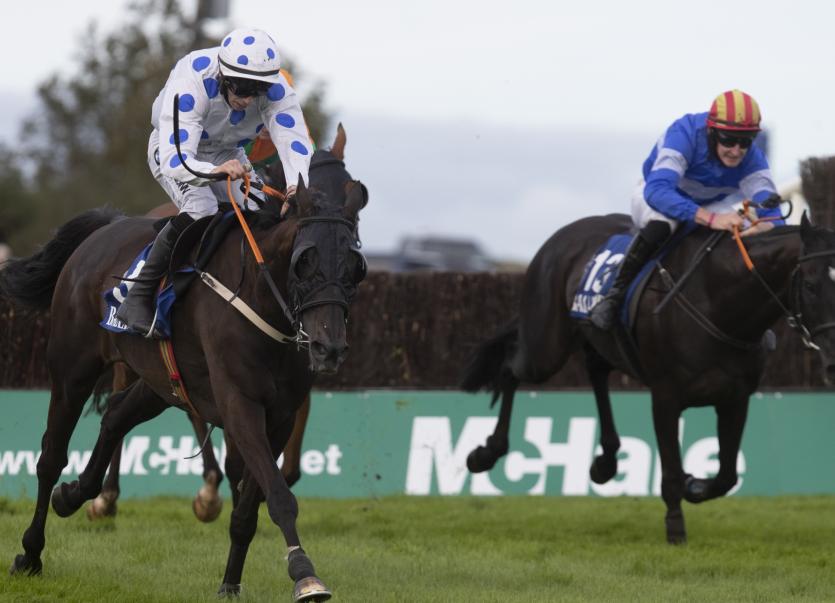 The 14/1 chance got to the line a length and three-quarters ahead of Henry De Bromhead’s Somptueux, with the winning trainer commenting, “Dollar Value can get a bit free so Conor dropped him out. I told Conor to put him to sleep, hunted him around and creep closer and hoe for the best after that! He’s a lovely horse.”

It was Rathkeale jockey McNamara's 12th winner of the season.

Meanwhile, the Austin Leahy-trained Ecoeye scored a comfortable success in the 7f handicap at Roscommon on Monday. A 15/2 chance under Dylan Browne McMonagle, the eight-year-old made all the running and came home three and a quarter lengths clear of the Denis Hogan-trained Agent Zero.

Royal Canford was another winner for the Billy Lee/Willie McCreery partnership as she made all the running to land the 7f handicap. A strong 5/1 chance, she won by two and three-parts of a length from the Kevin Coleman-trained Swiss Army Officer for her owner/breeder Michael O’Donnell, a winner for McCreery on his 52nd birthday.

It was also a winner for Ballingarry jockey Lee, his 30th of the season, on his first ride back after sitting out two weeks in quarantine after riding Romanised in France.

Another Limerick jockey Mark Enright and Curragh trainer Aidan Howard combined to win the second 11f handicap on the card with the Tanya Foxe-owned Thefaithfulindian.

The five-year-old didn’t get the clearest of runs in the straight but picked up in great style inside the final furlong to beat the John McConnell-trained Ally Cay by half a length.

Gavin Cromwell was another County Meath trainer to supply Conor McNamara with a winner as 5/2 chance Oscar Thyne edged out the Gordon Elliott-trained Fakir D’Alene by a head in the 2m3f maiden hurdle at Kilbeggan on Friday.

Cathal Landers brought his tally for the season to eight winners when successful on the Dot Love-trained Jack Hackett in the beginners’ chase. The 7/2 chance beat Dermot McLoughlin’s The Echo Boy by half a length.

Trainer Brian McMahon saddled the veteran Warreedy to win the 2m6f handicap hurdle at Ballinrobe on Sunday. The 11/4 favourite scored by an easy five-lengths under leading amateur rider Derek O'Connor from the Conor McNamara-ridden Mickey Shea.

The race of the day went to the Charles Byrnes-trained Doctor Duffy which landed the McHale Mayo National Handicap Chase in convincing fashion under Kevin Brouder.

The 6/1 chance recovered from an early mistake to beat the Tom Mullins-trained Chavi Artist by three and a quarter lengths in the colours of the Relicpride Partnership.