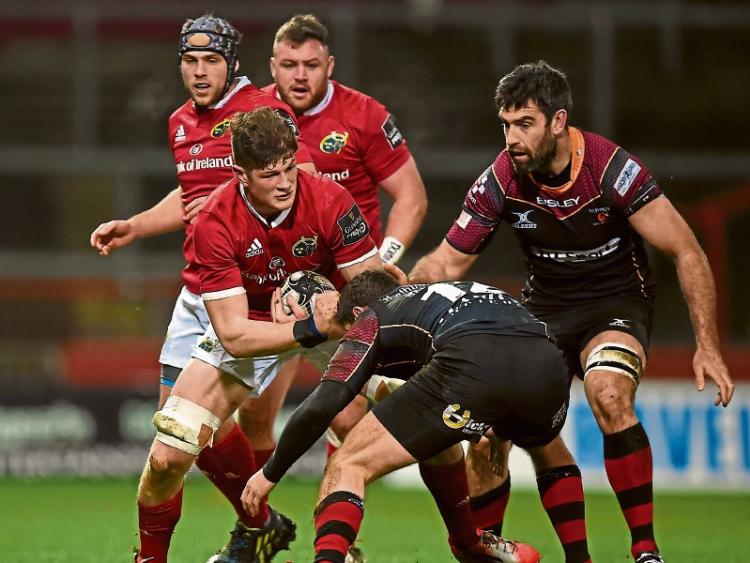 THE Munster side has been named for this Friday night’s Guinness PRO14 semi-final against Leinster at the Aviva Stadium (7.35pm, live on eir Sport).

There are three changes to the side that defeated Connacht last weekend with Stephen Archer, Billy Holland and Jack O’Donoghue coming into the pack.

The backline is unchanged for the third weekend in succession.

Shane Daly starts at full-back with Andrew Conway and Keith Earls, who made his 100th PRO14 appearance last weekend, on either flank.

Damian de Allende and Chris Farrell pair up in the centres for the third time.

JJ Hanrahan, who was awarded the Guinness PRO14 Golden Boot for the second time this week, is partnered by Conor Murray in the half-backs.

Jeremy Loughman, Niall Scannell and Archer pack down in the front row.

Last week’s Man of the Match Tadhg Beirne and Holland are in the engine room with captain Peter O’Mahony, O’Donoghue and CJ Stander completing the starting XV.

Mike Haley has recently recovered from a calf injury and is in line for his first appearance since the return to rugby.

Munster Head Coach Johann van Graan said: “The challenge of facing Leinster at the Aviva is massive but it is a great opportunity for us on Friday night.

“We have prepared as well as we could and we’re looking forward to the game.

“We want as much continuity as possible, it’s great to be able to select the same backline three weekends in a row.

“We have got a quality squad and that means a lot of competition in all positions.

“Everybody just wants the opportunity to play and we are excited for Friday night.”

Opponents Leinster are seeking to reach their 10th Guinness Pro14 final and their third in a row with head coach Leo Cullen naming a team that includes 11 internationals and three British & Irish Lions.