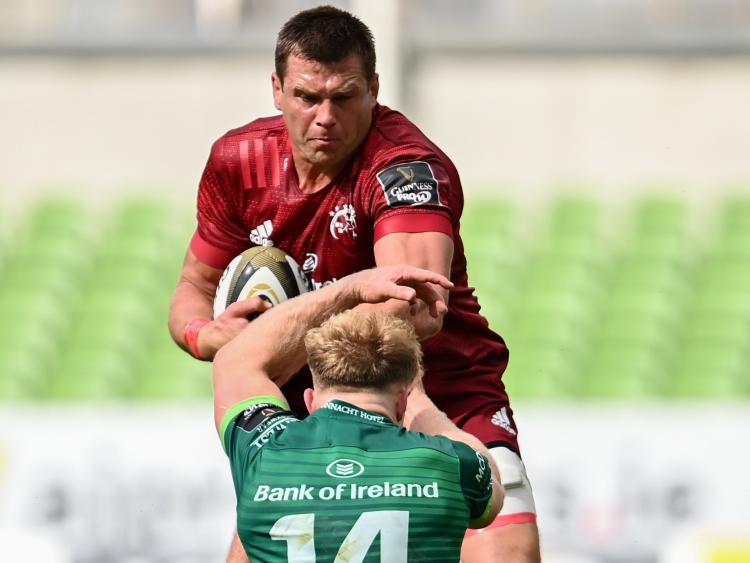 Munster number eight CJ Stander beats the tackle of Colm de Buitléar, of Connacht, in the Guinness Pro14 derby clash at the Aviva Stadium on Sunday

MUNSTER head coach Johann van Graan will bring his charges back to the Aviva Stadium on Friday night hoping for a change of luck in their Guinness Pro14 semi-final showdown with arch rivals Leinster, 7.35pm.

Munster will be looking to avoid a hat-trick of Pro14 semi-final defeats to Leinster in Dublin following their losses in both 2018 and 2019. The Munstermen's only victory at the Aviva Stadium in 12 visits since the ground's redevelopment was against Leinster in the Pro14 in October 2014.

Leinster have only only lost one their last eight fixtures against Munster, a 26-17 reverse at Thomond Park in December 2018.

Munster capitalised on Connacht's two first-half red cards yesterday to advance to the Guinness PRO14 semi-finals with a 49-12 bonus point win at the Aviva Stadium.

Munster now face a five-day turnaround before taking on Leinster in the 160th meeting between the two provinces.

Speaking in the wake of his side's 37-point win over Connacht yesterday, head coach Johann van Graan said: “It's the shortest turnaround that we have had in years. That is just the cards that have been dealt to us. We will literally have one training session and we are back here on Thursday.

“It's all about recovery, but that is the challenge of sport. That is what we have got to do and we will be back here on Friday evening against the champions in their back yard.”

Van Graan added: “You will have to be at your best to beat Leinster away. The last semi-final last season we said after the game that our discipline wasn't good enough and that was because of pressure they applied.

“It will definitely be a pressure cooker game. I think both sides performed very well last weekend when they played each other.

“All parts of your game needs to fire to apply scoreboard pressure on them
Munster were boosted in their runaway win over Connacht by a Man of the Match display from fit-again second-row Tadhg Beirne. It was the Ireland international's first appearance for Munster since last December when he fractured his ankle against Saracens in the Heineken Champions Cup.

Van Graan said: “Tadhg really played well. I felt it was a good performance from him and Fineen (Wycherley) and Billy (Holland) coming on to close the game.”