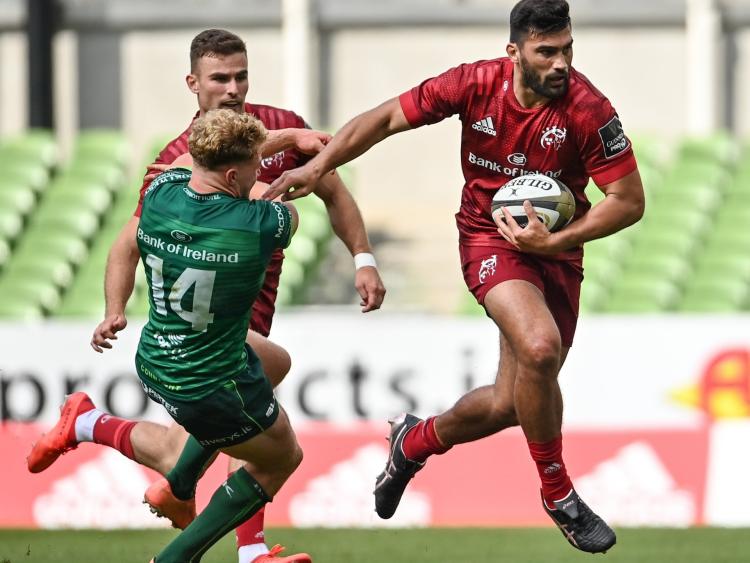 MUNSTER set up a Guinness PRO14 semi-final showdown with Leinster at the Aviiva Stadium on Friday night after recording a  49-12 bonus point victory over 13-man Connacht at the Aviva Stadium on Sunday afternoon.

This will be the third year in succession that Munster will face holders Leinster in the semi-finals of the Pro14 in Dublin. Kick-off on Friday night is 7.35pm.

Munster lost those two most recent semi-final meetings with Leinster in the Guinness Pro14 in Dublin.

The opening 40 minutes at the Aviva Stadium produced two red cards for Connacht players, their new number eight Abraham Papali'i sent off for a dangerous tackle on Conor Murray before hooker Shane Delahunt saw red after he led with his elbow while carrying the ball and caught Stander in the neck.

Munster also had two players sin-binned in that opening half, while a much-changed Connacht side lost a player to the sin-bin in an interprovincial fixture which produced a whopping 22 penalties in the opening half alone.

Johann van Graan's Munster side notched seven tries in all, four in the second half against a Connacht side which tired visibly given their numerical disadvantage in the third quarter.

After a tough week on the injury front for Munster, the province was boosted with the welcome return of Ireland second-row to the team. Beirne was playing  for the first time since fracturing his ankle away to Saracens in the Heineken Champions Cup last December.

Tadhg Beirne runs on to Conor Murray's quick pass to go over for Munster's bonus-point try.

Beirne turned in an impressive hour in the derby, marking his return by grabbing one of Munster's tries in a Man of the Match performance.

Connacht made  14 changes to the team that saw off Ulster in bonus point style seven days earlier, with head coach Andy Friend keen to give game-time to more players after a long absence due to the Coronavirus outbreak.

Among those starting for the Westerners was former Munster back Sam Arnold who makes his Connacht debut in the centre. Another ex-Munster player, Conor Oliver made his first start in the westerners' back row, following his debut off the bench last week.

Andrew Conway finishes off a brilliant, length-of-the-pitch move for Munster's fifth try at the Aviva Stadium.

After Connacht conceded six penalties inside their own half in the opening seven minutes. back-row Conor Oliver was sin-binned.

From the last of those penalty awards, Munster again opted for a kick to touch and from a well-executed maul, flanker Chris Cloete dotted down after captain O'Mahony had claimed an excellent line-out.

JJ Hanrahan converted for a 7-0 lead.

It was all one way traffic now. Munster made their numerical advantage pay further when sending the Connacht scrum scampering backwards from a set-piece deep inside the Westerners '22. Match referee Frank Murphy had no hesitation in awarding a penalty try and suddenly the 'home' side's lead was out to 14-0.

Connacht were reduced to 14 players when number eight Abraham Papali'i was red carded for a high tackle on Munster scrum-half Conor Murray after 25 minutes.

The penalty count against Connacht was up to 11 by the 27th minute of the contest. In contrast, Munster were pinged three times during that spell.

And Connacht's discipline let them down again in the 35th minute when they lost a second player to a red card, this time hooker Shane Delahunt after he led with his elbow while carrying the ball and caught Stander in the neck.

Munster once more quickly capitalised on their numerical advantage when prop Jeremy Loughman dotted down from close after Munster swung the ball left and right to create the opening.

Chris Cloete touches down for the first score of the afternoon following a Munster line-out, and JJ Hanrahan adds the extras.

To their credit, Connacht upped their performance in the minutes leading up to half-time with Munster skipper Peter O'Mahony sin-binned.

And Munster were down to 13 players when Tadhg Beirne was sin-binned for going off his feet at the breakdown as the clock ticked deep into the red.

With the game set at 13 v 13, Connacht's pressure was rewarded when replacement Bundee Aki touched the ball down after a powerful surge.

Conor Fitzgerald duly added the conversion to end the first half which featured 22 penalties, including 10 awarded against Munster.

Munster increased their 21-7 half-time advantage when the returning Tadhg Beirne scampered over for the bonus point try in the 50th minute. Hanrahan coverted for 28-7.

Munster went the length of the pitch two minutes later when Andrew Conway dotted down off Damian de Allende's pass.

Flying winger Conway then bagged a second try in the 55th minute when he collected Hanrahan's neat grubber to score. The successful conversion made it 42-7.

Munster rung the changes for the final quarter, emptying the replacement's bench with more than one eye on next Friday night's semi-final with Leinster.

Munster did add a seventh try through James Cronin when barging over from close range on 69 minutes before replacement Johnny Murphy crossed the whitewash for Connacht's second try late on.