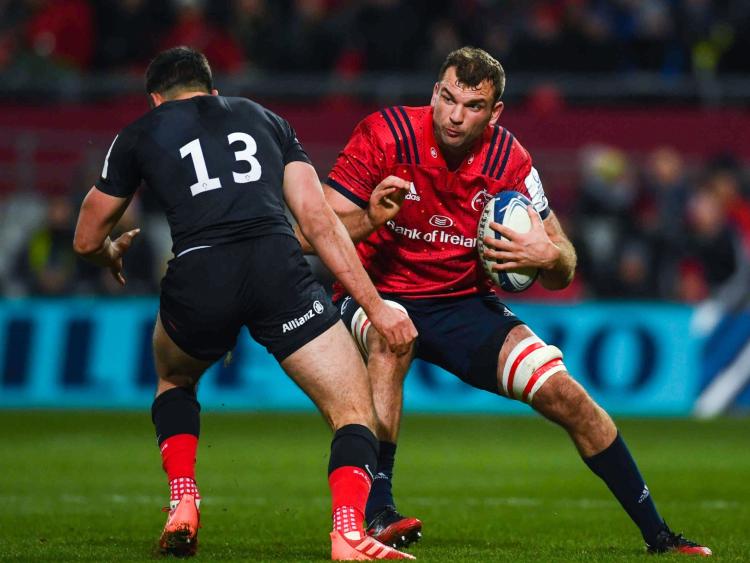 MUNSTER have received some good news in a tough week on the injury front for the province with confirmation that Isecond-row Tadhg Beirne is in the mix to face selection against Connacht in the Guinness PRO14 this Sunday, 3pm.

However, the Ireland international has recovered from the injury and is in line to feature for Munster once again, eight months after sustaining the injury at Allianz Park.

Beirne's return is a timely boost for Munster with their South African World Cup winning second row RG Snyman set to be sidelined for upwards of six months after tearing the ACL in his left knee just seven minutes into his Munster debut last weekend against Leinster.

Munster senior coach Stephen Larkham told their weekly media briefing "From a second row perspective, Tadhg Beirne is back which gives us a little bit of depth. Tadhg is back training and in contention this weekend.

"Billy Holland is all good. Fineen Wycherley is back as well. I think it is timely for those gusy coming back in. We also got some academy players, Thomass Ahern is showing a lot of promise. Paddy Kelly also.

"Both are good young prospects who we would be very comfortable putting in the main team."

"We haven't really got the final update at this stage. He saw the surgeon yesterday but we haven't got the report yet," Larkham said.

"It is not good news. Whatever the time frame on a normal ACL is - that's what we are looking at, I know it varies a lot.

"Devastating news for RG. He came over here with a goal to become part of this team and he had been training exceptionally well for us. We had been very excited to have him here as well and he knew there was a fair bit of expectation. It is devastating news."

Larkham indicated that Munster would not be looking to bring in any extra cover at out-half following Joey Carbery's recent injury news.

"Short term, no. We are definitely focused on playing the game this weekend and finishing off this season best we can.

"We have got a couple of young guys in the Academy if you look from a five eights perspective. We got Ben Healy, Jake Flannery and Jack Crowley who have been training with us for the last couple of months. We have a lot of confidence in those guys.

"We certainly feel they understand the system quite well so we are quite comfortable putting those guys in if we need to."

Munster have also confirmed that prop Dave Kilcoyne suffered an ankle ligament injury in Saturday's game at the Aviva Stadium.