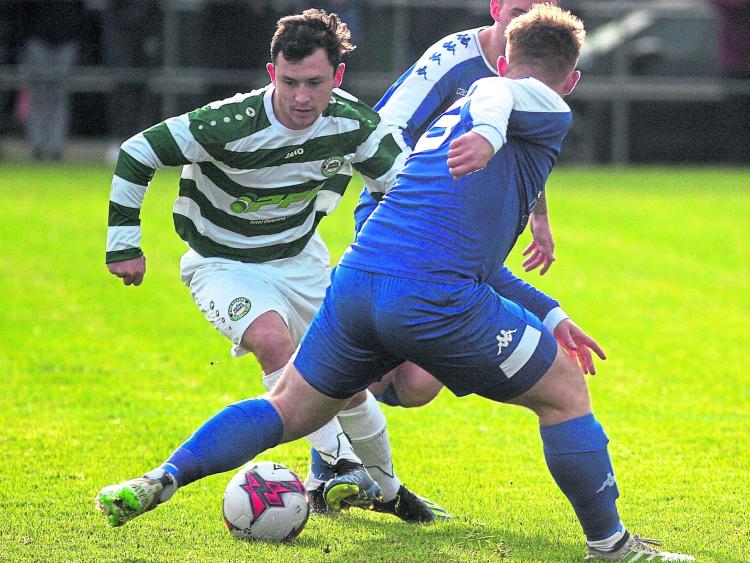 WITH the season just over a week old we face one of the big games of any season when Pike Rvs host Ballynanty Rvs at the Pike Club in the Premier League tomorrow (Thursday) evening.

Balla' have had a good start to the campaign with two wins, a 7-1 opening day victory over Coonagh followed by a 5-1 win over Geraldines last Sunday.

Pike Rvs did not play at the weekend but took full points on opening day with a 4-0 win over Prospect.
There is always a good battle when these two clubs meet and you can expect more of the same tomorrow evening.

Ballynanty Rvs new central defence of Adam Costello and Jake Dillon will face their first major test against a very good Pike side. Evan Patterson scored twice in Pike's win and he will be looking to add to his tally. Add in the threat posed by Steve McGann, Eoin Hanrahan; etc gives an idea of the threat posed by the Hoops.

When it comes to strikers, Balla' have one of their own. Conor Ellis is without doubt one of the best finishers in the League and he already has five goals to his credit. It's all about getting service to the front man from midfield and that is where this game may well be decided.

Colin Daly, Conor Kavanagh and Shane Walsh up against David Donnan, Ger Barry and Jason Hughes (all depending on selection of course) will be vital.

It's a pity that fans are still restricted from attending for such a game but needs must.
Regional Utd have been unfortunate with both their first two games being abandoned. It's unfortunate they must meet a side who have had a few games under their belt in Fairview Rgs.

Fairview will be on a high after beating Athenry in the semi-final of the FAI Junior Cup at the Fairgreen on Saturday. They have had three tough games under their belt over the last couple of weeks which will stand them in good stead for tomorrow’s game. Regional will rely on their pre-season training program.

They have retained their squad from last season with a couple of unfamiliar additions that can but boost an already very good side.

Fairview have been finding it hard to find the net in recent games and Regional's defence will be looking to add to that problem. Match sharpness could well play it's part in this one.

Aisling Annacotty won their only game to date courtesy of an 86th minute Aaron Murphy goal to beat Nenagh. They welcome Kilmallock to Annacotty and form suggests they should add to their points total.

The county side had a very disappointing 4-0 home defeat in their opening game versus Nenagh and lost again on Sunday to Coonagh.

They have conceded 11 goals in their two games to date and the thoughts of facing Clarke, Murphy and new signing Keith Mawdsley will hardly instil confidence.

Geraldines opened their account with a heavy defeat against Ballynanty, a feat also experienced by their opponents on Thursday, Coonagh Utd who bounced back with a win over Kilmallock in their second outing.

The form of striker Brion Moriarty is a welcome boost to the Hoops who are hoping for a better run of form this season.

Geraldines will see this game as one where they can expect to win the points, but expectations must be matched by performance and Derek Hannon and Co, will be drilling into his side the importance of this tie.

Little was expected of Janesboro following the exodus of virtually their whole squad, but Jason O'Connor, Conor Lynch and David Browne will be delighted with their performance in a gritty 4-4 draw with Mungret last Sunday. A young Janesboro side showed great character earning a point with a late equaliser.

On Thursday they will meet Nenagh who were very impressive in a 4-0 win and most unlucky to concede a late goal in a 1-0 defeat to Aisling in their second game. The Tipperary side have seen a number of younger lads return to the side which could make them a different proposition this time out.

Mungret were hot and cold on Sunday. Defensively they were not good early on but came back into the tie on the back of their attacking ability.

They cannot afford the same laxity against Prospect in Cals Park.

Prospect fell in their opener to Pike Rvs and will be hoping for a speedy return to winning ways.