Limerick IFC: Round-up of all round two games as four sides into quarter finals 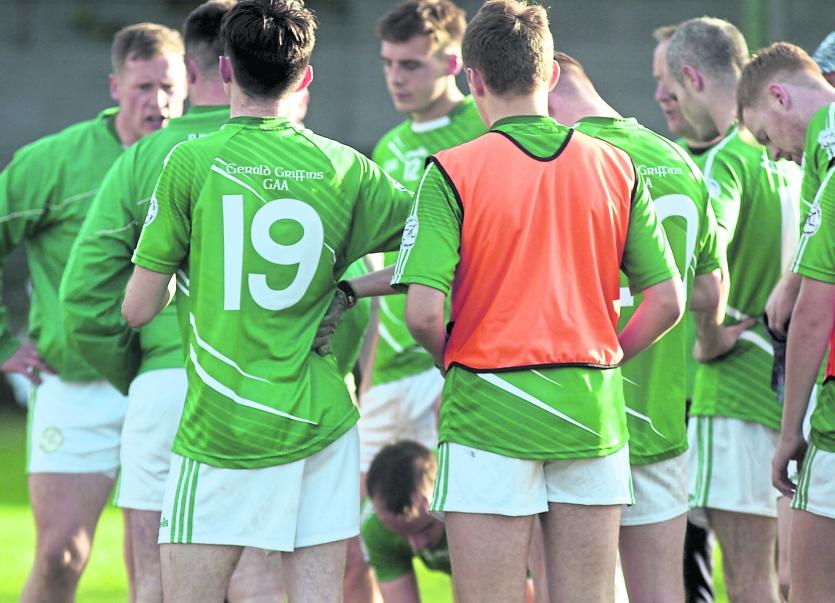 Gerald Griffins into the quarter finals

Already Gerald Griffins, Rathkeale, Mungret and Kildimo-Pallaskenry have reached the last eight of the Limerick IFC.

Also confirmed is that Monaleen are set for one of the four places in the relegation play-offs.

An 11-point fightback by Mountcollins to draw this game in Rathkeale.

Claughaun were 3-3 to 0-1 ahead with goals from Eoin Murphy, Mark O'Halloran and Gary Bateman after 20-minutes.

Claughaun were 3-6 to 2-2 ahead entering the final quarter with Matthew Brouder getting the Mountcollins goal. Claughaun didn't score in the final 15-minutes and a James Brouder goal and Anthony Hartnett points sealed the draw.

The final four points went the way of the estuary men to edge past their city opponents in Askeaton this Wednesday evening.

St Patricks found two second half goals, Eoin Hanrahan and Shane Airey, and moved 2-8 to 0-12 ahead inside the final five minutes.

Then came the run of winning points from Gerald Griffins with Dara Noonan among those on the scoresheet.

Nine points between the teams in the end but Rathkeale were 13-points clear at one stage in Mick Neville Park.

Rathkeale had eight point scored by six different players before Mountcollins opened their account just before half time.

A Barry Coleman goal helped Rathkeale 1-13 to 0-3 clear before Tom McCarthy had a late goal for Mountcollins.

A 15-point win for last season's finalists from Loughill-Ballyhill in Mick Neville Park.

An early burst of 1-2 set Gerald Griffins on their way. Seamus Mulcahy did have a Pallasgreen goal from a penalty and it was 1-7 to 1-2 to the west Limerick side at half time with Paul Brouder and Dara Noonan among their scores.

Pallasgreen were to score just once in the second half.

A goal from a penalty from inter-county hurler Sean Finn had Bruff ahead 1-2 to 0-3 after 20-minutes but a goal from Sheagh O'Connor and points from Kevin Moore and Kevin Sweeney gave Glin the interval lead.

Jack Sheehan had a second goal for Glin early in the second half and points from Brendan Flanagan and Ollie Wallace helped move them 2-8 to 1-4 clear.

Sean Finn had a second goal late in the game but Glin were five point winners.

These sides were tied 0-6 each at half time in Caherdavin. Tony McCarthy and Shaun Barry (frees) were among the scores for the eventual winners.

The victory was sealed with eight unanswered points at the beginning of the second half to move 0-14 to 0-6 clear - Darren O'Connell, Peter Nash and Darragh Deegan among the scorers.

Monaleen found two quick-fire goals but couldn't reel in Kildimo-Pallaskenry, who now join Mungret in the quarter finals after this result.