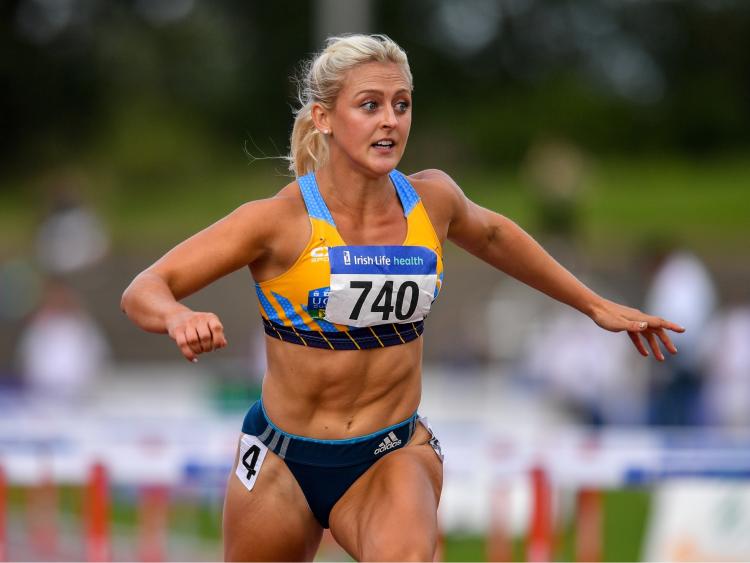 Emerald ACs Sarah Lavin took the Senior 100m final on the second evening of the Leevale 2020 Track and Field meet in 11.67 seconds

FIXTURES are starting to re-emerge albeit many on an Invitational basis, allowing athletes a chance to experience competition again. There was good performance from Limerick athletes in Cork and Belfast last week.

HELD at CIT July 28 and 30 several Limerick athletes made the journey to Leeside.

Mark Carmody (An Brú) followed up last weeks victory in Moyne with another here, taking the 400m in 52. 18.

John Paul McCarthy (Kilmallock) travelled to Leixlip, Co Kildare for the Le Chéile AC ‘Day of Irish P. B.’s and finished the track based 5000m in 18:01 for 18th place overall.

West Limerick A.C. would like to thank everyone who registered and donated for our community fundraiser in the month of July.

We set out in June to help some local charities that missed out on much needed fundraising events. We partnered with The Friends of St. Itas Community Hospital, Deel Animal Action Group and The Brother’s of Charity.

Our effort soon became a joint fundraiser when we teamed up with Newcastle West Camogie Club to try and raise as much as we could for these causes. Through the efforts of both clubs and members we will have raised around €6000.

Over the month of July our virtual runs offered something for everyone. We had juvenile athletes try the 1k and 2k distances while adults took on everything from 1k to the half marathon distance.

It was great to see the geographical spread of entrants who wanted to help charities in West Limerick.
In a time of great uncertainty it was lovely to be able to run or walk for those that can not.

It also gave runners a purpose to run and train, something that we have all missed during this period of Covid 19.

All the results are posted on www.myrunresults.com There are many fine results across the distances and we say well done to all those who appear on the leaderboards.

The real winners though are the charities. They will benefit hugely from the generosity of those that registered and donated to this fundraiser.

West Limerick A.C. are returning to adult training this Tuesday August 4th with coach Ger Cremin in the Demesne , Newcastle West at 7pm. Please be there to warm up from 6.45pm.