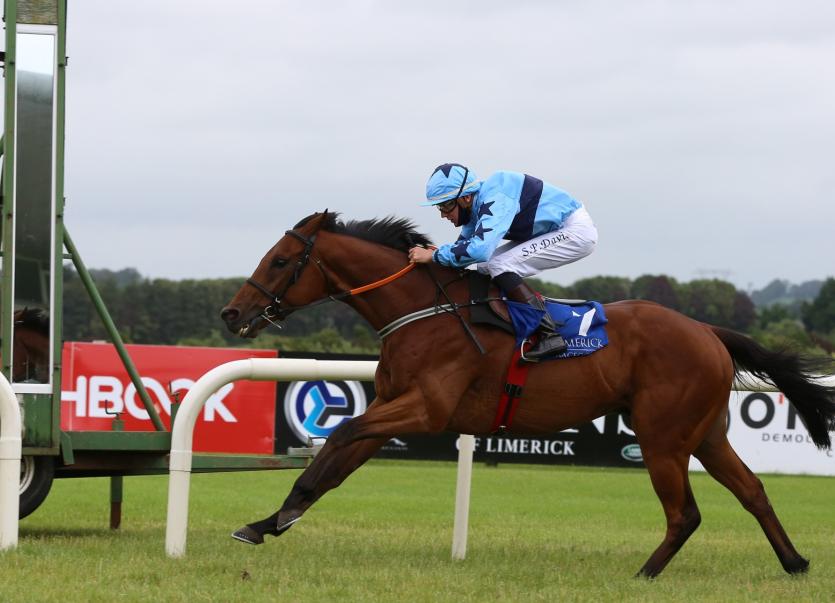 BALLINGARRY jockey Billy Lee continued his fine run of form and rewarded Curragh trainer Ken Condon with another early season winner at Limerick on Monday where the David Kelly-owned Inner Beauty won the fillies’ maiden over the extended 6f.

The 5/2 chance was trapped in behind horses with over a furlong to race but Lee wasn’t long in getting her into the clear and she quickened well to score by two lengths from the Andy Slattery-trained Consternation.

Ballingarry trainer Charles Byrnes won the concluding handicap over 12f with the gambled-on Wajaaha. Opening shows of 4/1 quickly disappeared and the five-year-old was returned the 6/4 favourite before scoring a cosy three and a half-length success in the hands of Sean Davis.

Rathkeale conditional rider Conor McNamara, brother of Epsom Derby winning jockey Emmet, got off the mark for the new National Hunt season when partnering the Liam Lennon-trained Maureen’s Star to win the second 2m4f handicap chase at Kilbeggan on Monday.

He got a great tune out of the seven-year-old late on and the pair flashed home to deny the Gordon Elliott-trained 4/1 favourite Thisonesforollie and Davy Russell by three parts of a length at odds of 13/2.

McNamara was a winner again when the Gavin Cromwell-trained Bread And Butter scored a five and a half-length success in the 2m4f handicap hurdle at Tipperary on Wednesday. The well-backed 7/2 favourite raced clear late on to score from Rebel Waltz.

Trainer Charles Byrnes recorded his second winner of the week and shared it with his son Philip who partnered Run For Mary to a narrow success in the 2m1f handicap at Bellewstown on Thursday. The 11/10 favourite had to battle to get the better of the Noel Meade-trained With A Start by three-parts of a length. The winner is owned by the Top Of The Hill Syndicate and was a third success for the successful rider.

Shanagolden jockey Chris Hayes had a weekend to remember and the Shanagolden star rode two winners at Naas on Saturday before riding the second four-timer of his career at Cork the following day.

Hayes shared his Naas winners with Fozzy Stack, the pair taking the 7f handicap with 4/1 favourite Star Of Cashel which comfortably beat the Jack Davison-trained Madaket Mystery by a length and three-quarters.

Meaningful Vote won the handicap over a furlong further in the colours of Anthony Cullinan. The 11/4 chance beat Joseph O'Brien’s Fame And Acclaim by three-parts of a length, defying a 10lbs hike in the weights for finishing second at Gowran Park previously.

Hayes stole the show at Cork on Sunday where he rode the second four-timer of his career. He rode four winners on the same card at Limerick in April, 2015 and set himself up for another fine day when partnering the Ken Condon-trained Miss Amulet, a 5/2 chance, to a five-length win in the opening 5f auction maiden.

He landed a bigger success when giving Henry De Bromhead his first Group race winner as the Stephen McCarthy-owned 9/1 chance Minaun won the Group 3 Marble Hill Stakes by a neck from the Paddy Twomey-trained Arctician. She was the outsider of the four-runner field. Hayes made it three on the Fozzy Stack-trained 15/2 chance Starlite Dancer and a memorable day was completed as Too Soon To Panic, another trained by Stack, took the 8f maiden at odds of 9/4.

Billy Lee took the Listed Irish Stallion Farms EBF Sweet Mimosa Stakes on the Paddy Twomey-trained 12/1 chance Sonaiyla. Lee made much of the running on the Ennistown Stud-owned four-year-old which beat the Fozzy Stack-trained Back To Brussels by half a length.

Triple Classic success for the O’Briens

Aidan O'Brien and his youngest son Donnacha were classic heroes in a wonderful two days for the family at Epsom and Chantilly. Aidan recorded a Derby/Oaks double at Epsom on Saturday and became the Derby’s winning most trainer as 25/1 chance Serpentine made virtually all the running under Rathkeale jockey Emmet McNamara for a stunning five and a half-length success.

It was O’Brien’s eighth win in the race and 30-year-old McNamara was winning on his first Derby ride. Love added to her Newmarket 1,000 guineas victory with a runaway nine-length win in the Investec Oaks.

Ryan Moore was again in the saddle as the 11/10 favourite easily brushed aside her stable companion Ennistymon to give O’Brien his eighth Epsom Oaks success. Donnacha O'Brien became the third member of the O’Brien family to train a Classic winner when Fancy Blue, runner-up in the Tattersalls Irish 1,000 Guineas, led home an Irish-trained 1-2-3 in the Prix De Diane Longines at Chantilly on Sunday.

She battled well to beat the Jessica Harrington-trained Alpine Star by a short-neck with his father’s Peaceful a head away in third place. The 21-year-old, who has now trained four winners in all, watched the race from Fairyhouse racecourse. Both Love and Fancy Blue could reappear in the Irish Oaks at the Curragh.