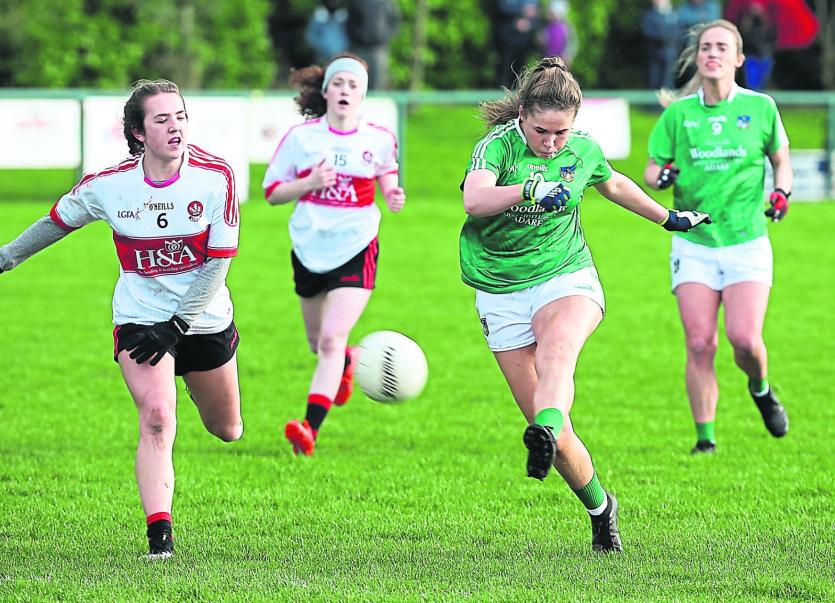 Limerick's Aine Cunningham in action against Derry during their league tie

The Donal Ryan managed Limerick will play in the junior championship after relegation last season from the intermediate ranks.

An open draw determined the make-up of the two groups of three teams for the Junior Championship round-robin phase.

Group One contains 2019 runners-up Fermanagh, alongside Carlow and Wicklow, while Limerick, Derry and Antrim have been pitted together in Group Two.

2018 junior champions Limerick, Derry and Antrim all played in Division Four of the Lidl Ladies Football League. Limerick scored a big win over Derry when the sides met in Staker Wallace GAA grounds in Martinstown but the Limerick-Antrim game was among the fixtures cancelled due to Coronavirus restrictions.

The top two teams in each group will contest the All-Ireland semi-finals, with the Group One winners facing the Group Two runners-up, while the Group Two table-toppers will face the second-placed team in Group One.

This Tuesday night, Ladies Gaelic Football Association President Marie Hickey and Ard Stiúrthóir TG4, Alan Esslemont, were on hand to conduct the draws, and the 2020 finals will mark the 20th of the long-standing partnership between the LGFA and TG4.

It was also confirmed that promotion is on offer for the winners of the 2020 Junior and Intermediate Championships, but relegation will not apply in the Intermediate and Senior grades.

The dates for the 2020 TG4 All-Ireland Ladies Football Championships will be confirmed in the coming weeks.