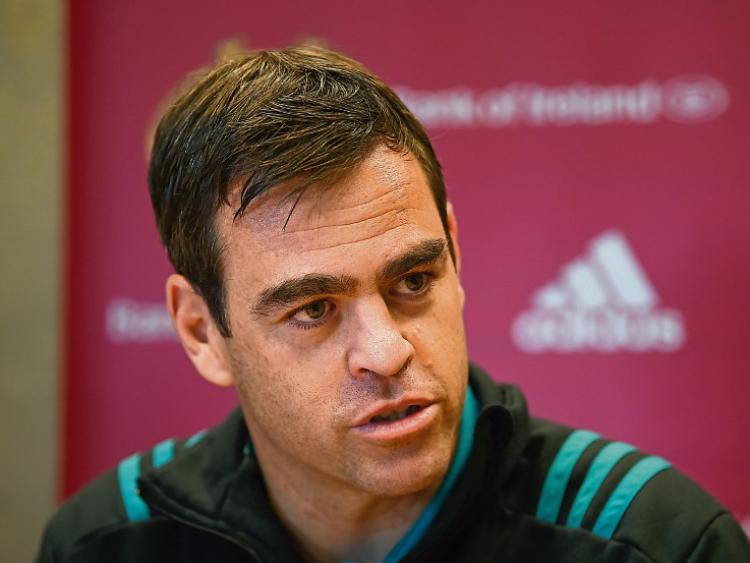 HEAD coach Johann van Graan says the Munster squad must learn to adapt to the challenges posed by the 'unique situation' that the outbreak of coronavirus poses.

Munster are facing a six-week gap between competitive Guinness PRO14 fixtures following confirmation that their away and home fixtures against Benetton Rugby scheduled for March 21 and 27 have been postponed.

A Munster spokesperson said Munster Rugby and the team's High Performance Centre at UL are operating as normal. No cases or symptoms of coronavirus has been reported within the squad.

Munster's next scheduled fixture in the PRO 14 is a Saturday, April 11 meeting with Cardiff Blues at Thomond Park, 3pm.

The Munster squad returned to the High Performance Centre at UL on Tuesday after a scheduled down week.

Speaking about the upcoming training weeks, Head Coach Johann van Graan said: “Obviously this is a unique situation and this is the first time that this has happened so we’ve just got to adapt.

“All credit to all our staff, we have put our heads together and the important thing is having the mindset that we adapt to any change.

“The plan for the next few weeks’ training has changed quite a lot. We had given the squad a week away from rugby last week to prepare for the two games against Benetton on the 21st and 27th and obviously that’s changed and the international players didn’t play the two Test matches against Italy and France.

“The squad came in on Tuesday and the internationals will join us on Monday, we’re just going to take it week by week and adapt to the situation and train as well as we can.”

Regarding the different training load for individual players over the coming weeks, Johann said: “It’s a bit different, in some situations you can go harder than normal, but it’s important that you treat each individual according to their own needs.

“It’s about managing your squad and firstly making the individual better and as a group prepare as well as we can with the information that you have.

“As usual, we will have a large group of Academy players playing AIL rugby at the weekend for their clubs.”

With Senior Coach Stephen Larkham joining Munster in August and Forwards Coach Graham Rowntree linking up with the squad in October following his Rugby World Cup commitments, the upcoming weeks are an opportune time for the coaches to spend more training time with the squad, Van Graan believes.

“That’s one of the positives we take out of the situation,” Van Graan said.

“The fact that when the national players come in next week, it will be the first time that they are in our environment for two or three weeks without a game so that we can actually train a lot of the stuff that we have been working on as a squad when they weren’t here.

“So that’s a real positive, some time together for all the coaches with the whole squad.”