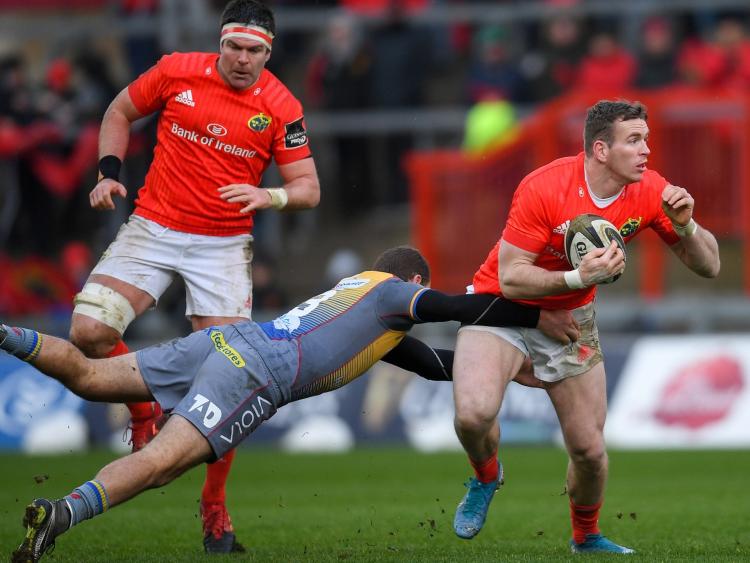 Three second half tries, two from Gavin Coombes and one from Billy Holland, guided Munster to a precious victory over their Conference B rivals.

If Storm Jorge was the big winner from the opening half at Thomond Park, Scarlets second row Sam Lousi was the big loser when he was red-carded in the 34th minute.

The complexion of the game changed utterly with Lousi's sending off for a swinging arm in the direction of Munster out-half JJ Hanrahan.

Scarlets lost hooker Taylor Davies to an early injury and missed a Dan Jones penalty, the fly-half soon making amends to open the scoring for the Welsh region at 3-0.

Munster half-backs JJ Hanrahan and Craig Casey started to exert their control on the game, dominating possession and territory.

The hosts were eventually rewarded with a penalty, which Hanrahan dispatched for 3-3, the visitors pinned down in their own half amid the swirling wind.

Things got very heated in Thomand!

The pressure mounted on the Scarlets’ when Lousi saw red for a punch.

Munster made the most of their numerical advantage immediately when back-row Jack O'Sullivan burrowed over the whitewash from close range for the opening's opening try.

Hanrahan's conversion made it 10-3 to the home side.

Munster get that vital first try of the game

Leading by those seven points at the interval, Munster set about extending the lead in the second half, often playing for territory and then getting a second as Holland peeled away down the blindside.

Scarlets though refused to feel sorry for themselves and redoubled their efforts, forcing play down to the other end of the pitch.

Their telling moment of play came after a spell of pressure, replacement prop Javan Sebastian using all of his grunt to power over from short range.

Hopes of a comeback were quelled though minutes later as Tevita Ratuva saw yellow for a dangerous tackle – replacement Coombes then on to scramble over the line.

Hanrahan kicked a fine conversion and the home side set about sealing the all-important fourth - finally coming deep into the red as Coombes kept his cool once more.