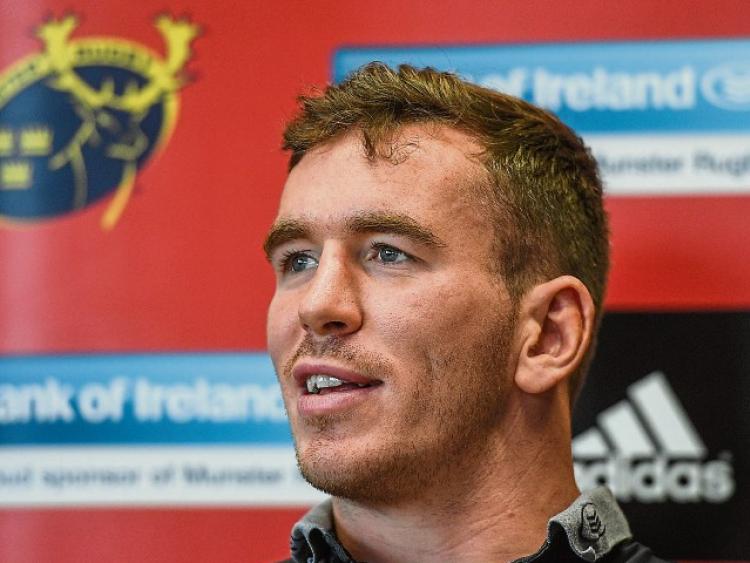 Centre Chris Farrell has been released back from the Ireland 6 Nations squad and will feature for Munster in Saturday's Guinness PRO14 clash with Scarlets at Thomond Park, 5pm

THE Munster side starting line-up to face the Scarlets in this Saturday evening's Guinness PRO14 fixture at Thomond Park, 5pm, has been named.

Munster report that hooker Niall Scannell suffered a low grade knee injury against Zebre last week that has ruled him out of Saturday’s clash. However, the injury is expected to be a short-term one.

Shane Daly underwent a scan earlier this week that showed a low grade groin strain. The injury prevented him from training this week but he will be a travelling reserve on Saturday.

Jack O’Donoghue aggravated an existing neck issue at the end of last week that hadn’t settled sufficiently to allow him train fully this week and therefore was not considered for selection.

Academy back-row Jack O’Sullivan keeps his place at no.8 in the side to face the Scarlets and is set to make his seventh senior appearance with Diarmuid Barron and John Hodnett among the replacements.

There are five changes to the side that secured a bonus-point win away to Zebre last week.

Mike Haley starts at full-back with Calvin Nash and Darren Sweetnam completing the back three.

Craig Casey and JJ Hanrahan continue in the half-backs with Goggin and Farrell forming the centre partnership.

James Cronin, O’Byrne and Archer pack down in the front row with Fineen Wycherley and Holland in the engine room.

A back row of Arno Botha, Chris Cloete and Academy man O’Sullivan complete the side.