Coaching replaces the ‘kick’ of playing for Mike Sherry 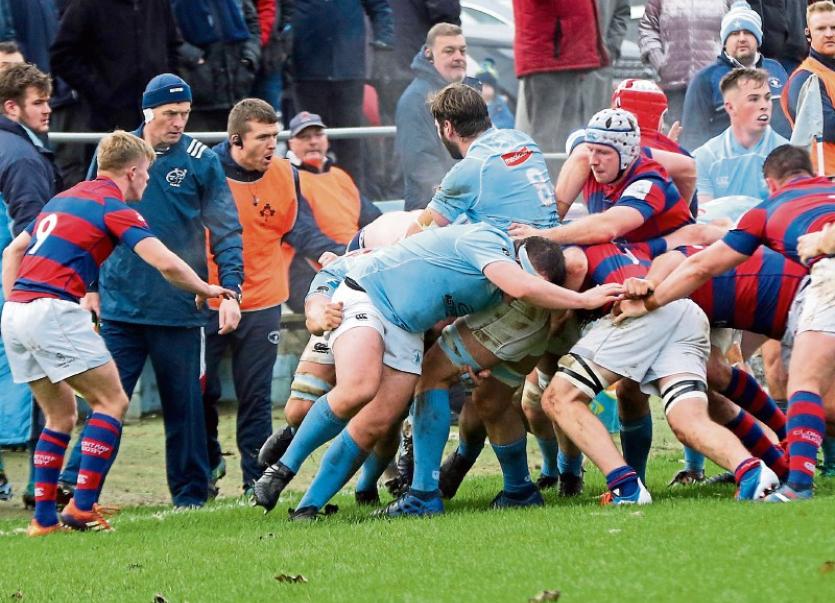 THE corridor outside the Garryowen FC team dressing room is a hive of activity.

A mixture of beaming players and club supporters basking in the satisfaction of pulling off the most dramatic of Energia All-Ireland League wins over Terenure College.

A last gasp drop goal from composed full-back Jamie Heuston secured the win for the ‘Light Blues’ who, not alone had to subdue a gritty ‘Nure side, but also overcome the might of Storm Dennis to prevail.

Former Munster and Ireland hooker Mike Sherry is a key member of the ‘Light Blues’ backroom team this season.

Sherry has made the transition from playing at the top level with Munster and, more recently Gallagher Premiership side Gloucester, to retirement.

Limerick man Sherry joined Munster in 2009 and went on to make a total of 108 appearances for the province, scoring 12 tries along the way.

The former Ardscoil Rís student established himself as a first team regular with the province in the 2010/11 season and was drafted into the Ireland squad for the 2011 World Cup. He would go on to make his Irish debut two years later, coming on as a replacement against the USA in the summer of 2013 following in his father Mick’s footsteps in becoming an Ireland international.

Sherry, now 31, captained Munster for the first time against Scarlets in March 2013 at the age of just 24.

He battled back from injury to make his 100th Munster appearance against Ulster in April 2018.

The Limerick man signed a short-term loan deal with Gloucester last March which saw him remain with the Premiership side until the end of May.

The curtain came down on his playing career at the end of his time at Kingsholm.

Announcing his decision to retire, Sherry revealed that the prospect of possibly picking up another playing contract was something he was ‘very much pursuing, but the longer it went on, the more I realised my body was telling me to stop.’

So how has the transition from playing top level professional rugby to retirement been for the Limerick man?

“I miss a lot of things. I miss the craic. I miss the training every day, playing rugby, I absolutely loved it. It was a dream career for however long I did it, but I don't miss playing and training at the minute because my body is feeling quite good and it wasn't for quite a long time, so that side of things I don't miss.

“I obviously miss the changing room and the craic. I miss those kind of moments when you are out on the pitch and you get a last minute win and the camaraderie of it.

“I suppose I am in quite a good place about my decision and I am getting my fix through coaching here and I haven't really thought about not playing since I hung up my boots, to be honest. I definitely think it was the right decision, it came at the right time and I am very happy with it.

“I am starting a new role with a company in the next few weeks. I took my time in deciding what I wanted to do and luckily an opportunity has come up so, I am looking forward to getting back out in the real world and hopefully continue this as well.”

Sherry is enjoying his new role as assistant coach with high-flying Garryowen in Division 1A of the Energia All-Ireland League.

He explained: “I retired from playing in July and took a few weeks or a month to enjoy retirement, get a surgery on my shoulder and reassess where I was at.

“Garryowen had been on to me previously, so I was kinda deciding whether or not to get back into rugby.

“I am delighted I did. I came back out in mid-August and got back involved with the lads. John Staunton and Conan (Doyle) had done a couple of weeks pre-season with the squad, so I was straight into it. I haven't looked back. It has been an absolute pleasure to be out here.

“We have gone well. They're a great group of lads. It has been a brilliant decision for my part.

“Coaching is something I would like to possibly pursue. I'm relatively new to it, so taking my time, but loving it so far.

“It is an assistant coach role, so I help John (Staunton) with the forwards, I help with defence, help a bit of attack, with a bit of kicking strategy, everything, I'm throwing my hand at everything, there are four of us in the mix with Barry McNamara as well.

“We are all learning off each other and we talk through things. Whatever we feel works, we put to the group, and luckily it has so far.”

The All-Ireland League may not enjoy the profile it once did on the rugby landscape, but Sherry is keen to stress the significant role in plays for the game in this country.

“The standard in the AIL is really high. The competitive nature of it, the whole aspect of a play-off for the top four sides, the whole relegation thing brings a different element to the games,” he pointed out.

“There are quality players playing, both coming back from Academies and senior set ups with the provinces and within the clubs as well. It is a brilliant resource and asset to have and we’re lucky to have it.”

Away from the rugby pitch, Sherry has dipped his toe into media work. The Limerick man has appeared on Irish language channel TG4s coverage of Guinness PRO14 rugby and he has also participated in a number of rugby podcasts.

The media work is a new challenge that he enjoys.

“The media work is definitely something I enjoy. The Irish is there in the background. I kinda knew once I retired I would get onto TG4 and see if they would be interested and they were, they are very keen to have former players, so I can touch up my Irish continually, it's rusty enough, but that is very enjoyable. It's a new challenge as well.

“It is quite daunting. It is daunting to be on TV speaking English and adding in the Irish is an extra challenge.

“I have done a few podcasts here and there. It's very enjoyable. It's kept me busy, so I've enjoyed it.”