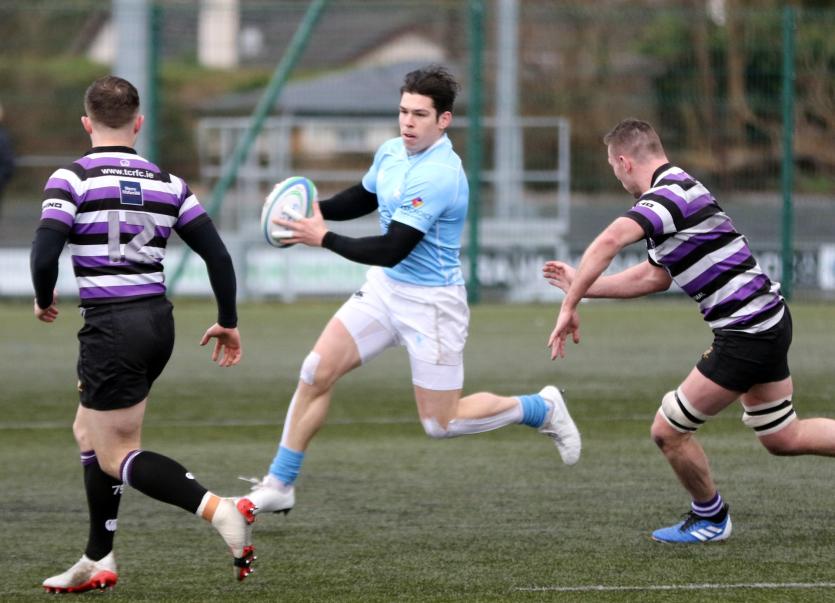 THREE Limerick sides recorded wins on a dramatic day in the Energia All-Ireland League as the action resumed after a three-week break.

In Division 1A, high-flying Garryowen boosted their hopes of securing a top four play-off position and a home semi-final to boot after securing a dramatic 8-5 victory over a gritty Terenure College side on the 3G pitch at Dooradoyle.

A last gasp drop goal from full-back Jamie Heuston, with the final kick of the game as the ball collided with the inside of an upright before dropping over, helped the 'Light Blues' extend their excellent run.

This was second-placed Garryowen's eighth victory in their last nine AIL fixtures.

Also in the top flight, Young Munster maintained their push for a top four spot after recording a deserved 21-9 success over Dublin University at College Park.

The win, Munsters' fifth in their last seven AIL outings, sees the Greenfields' side within four points of the top four play-off spots, with now six rounds of regular season games to come.

Meanwhile, in Division 1B, Shannon made it three wins on the spin when edging past second-placed Old Wesley 17-10 at Energia Park.

A penalty try late on helped 'the Parish' side pick up the four precious league points on offer. The result sees Shannon move up to third place in the table, one point behind second-placed Old Wesley.

There was no luck for the two Limerick sides competing in Division 2A, however, as third-placed Old Crescent had to make-do with taking a losing bonus point from a 7-0 defeat away to Ballymena, while UL-Bohemian sit in sixth place in the table after a frustrating 12-25 home defeat to table toppers MU Barnhall.

Finally, in Division 2C, eighth-placed Bruff had to be content with taking a losing bonus point from their narrow 8-3 defeat to Sundays Well at Musgrave Park.

The heavy weekend rain resulted in Garryowen's 1A fixture with Terenure College being switched from the grass pitch at Dooradoyle to the 3G surface.

Terenure College, coached by former Garryowen assistant coach Sean Skehan, led their hosts 5-0 at half-time, thanks to a Robbie Smyth try off a well-executed maul.

Garryowen enjoyed plenty of possession and territory, but a combination of too many errors, a lack of patience and composure from the home side and some excellent defending from 'Nure, ensured the visitors kept their noses in front until well into the second half.

A crucial try from Munster winger Alex Wootton hauled Garryowen level well into the second half. However, the home side withstood a late scare when the Dubliners were off target with a penalty attempt close to the end of the 80 minutes.

Garryowen made their pay when, after umpteen phases of possession close to the 'Nure goaline, the 'Light Blues' changed tactic, with full-back Jamie Heuston securing a dramatic victory when landing a decisive drop goal with the final kick of the contest.

Meanwhile, Young Munster laid the foundation for an excellent victory away to Dublin University in the opening half when playing with the aid of the wind.

An Alan Kennedy try, converted by Evan Cusack had Munsters' 7-0 to the good after 20 minutes. The Limerick side added two more tries before half-time with Sean Rigney dotting down after a Kennedy break, while Luke Fitzgerald also crossed the whitewash after Cusack's clever crossfield kick.

Cusack converted all three first half tries to help the visitors inside an 18-point interval lead. Dublin University managed two successful kicks at goal in the second period, but Munsters' deservedly held on to record a precious victory.

Ready for kick off in Ballymena... pic.twitter.com/yvPdJ6UVmb

In Division 1B, Shannon avenged November’s 24-20 home loss to Old Wesley when securing their dramatic 17-10 success in Dublin 4 on Saturday afternoon.

The sides were tied 7-7 at half-time, with Shannon's points coming courtesy of a 13th minute try from Nathan Randles, which was converted by Jake Flannery.

A 67th minute penalty from Ben Daly hauled Shannon level after Wesley had edged into a 10-7 lead.

The drama was far from over, however. Resilient Shannon were rewarded for a bout of concerted late pressure when awarded a penalty try which helped Tadhg Bennett side's secure the four precious points on offer.

Meanwhile, in Division 2A, Old Crescent took a losing bonus point from a 7-0 defeat to Ballymena in wet conditions in Eaton Park.

Thanks for hospitality @ballymenarfc and congrats on your win today. https://t.co/6ph7NWjvPR

A converted try 30 minutes into the opening half settled the game in the Ulster side's favour. promotion-chasing Crescent sit in third place in the table, two points behind second-placed Cashel and a point ahead of fourth-placed Rainey Old Boys.

Also in 2A, UL-Bohemian suffered their first loss at home since October at the hands of Division leaders MU Barnhall, on a wet and windy Saturday afternoon.

The home side got themselves back in the game in the third quarter when second-row Darragh Grady scored a fine try, converted by Harry Byrne to leave only five points between the sides.

However, UL-Bohs were rocked by the concession of two further penalties and a converted try to fall 7-25 in arrears with 15 minutes remaining.

The Annacotty side did manage to score a second try through Jamie Shanahan, but the losing bonus point eluded them.

In Division 2C, Bruff sit just one place and one point clear of the relegation play-off position after suffering a frustrating five point defeat at the hands of fifth-placed Sundays Well.

The Limerick side, who enjoyed a plentiful supply of possession over the 80 minutes, trailed 3-5 at half-time in a fiercely competitive fixture.

There was just one further score in Cork in the second half as Sunday's Well added a precious penalty goal to secure victory.