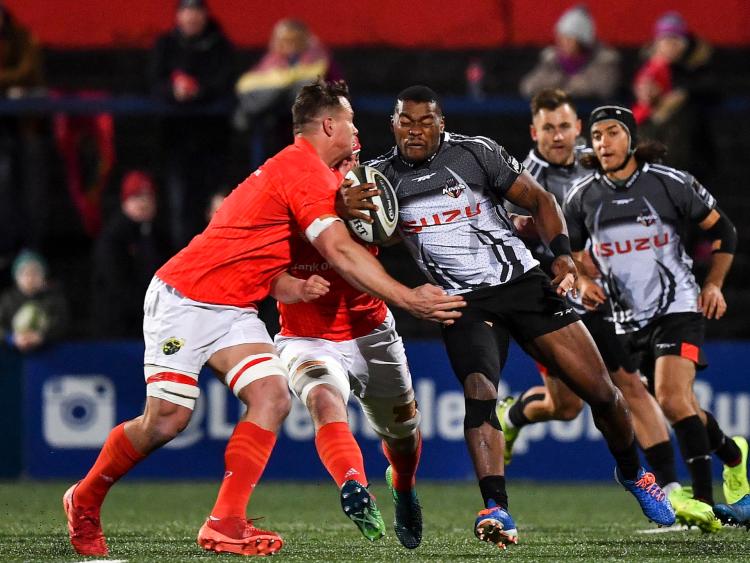 MUNSTER got back to winning ways in the Guinness Pro 14 when putting the hapless Southern Kings to the sword in a record 68-3 success at Musgrave Park on Friday night.

Johann van Graan's charges ended their two game losing home run in the competition when scoring 10 tries, six in the second half, before an impressive official attendance of 6854 on Leeside.

The win was a record margin of victory for Munster in the PRO14 and the 10 tries and 65-point winning margin were also records.

Munster moved to the top of Conference B of the PRO14 as a result of the bonus point success as Edinburgh and Scarlets face-off in Wales on Saturday.

Munster only win in the four previous rounds of Guinness PRO14 had been a 19-14 over Connacht in Galway
on 21 December.

However, there was never any fear Munster would lose this one.

The Man of the Match accolade went to Academy back-rower John Hodnett, who scored one of the home side's tries on a hugely impressive debut.

How good was this?

Munster had the game in safe-keeping by half-time after which the home side held a commanding 28-3 lead.

Perfect start for the home side as they take full advantage of the attacking scrum as Arno Botha simply powers his way over.

Johann van Graan's charges scored four tries in the opening 40 minutes to have the bonus point in the bag. Powerful number eight Arno Botha bagged a brace of tries, while in-form winger Calvin Nash and back-row Jack O'Donoghue, who was released from Ireland 6 Nations camp to play for his province, also dotted down.

Munster's starting line-up included debutant at this level, first year Munster Rugby Academy man John Hodnett. Hodnett, a member of Ireland U20s Grand Slam winning side of last season, played a key role in Munster's opening try for Botha on minutes minutes when making a terrific break up the middle of the pitch.

Now this is special from @Munsterrugby

The run from Haley, the offload from Cronin and Hodnett's power proves too much for @SouthernKingsSA