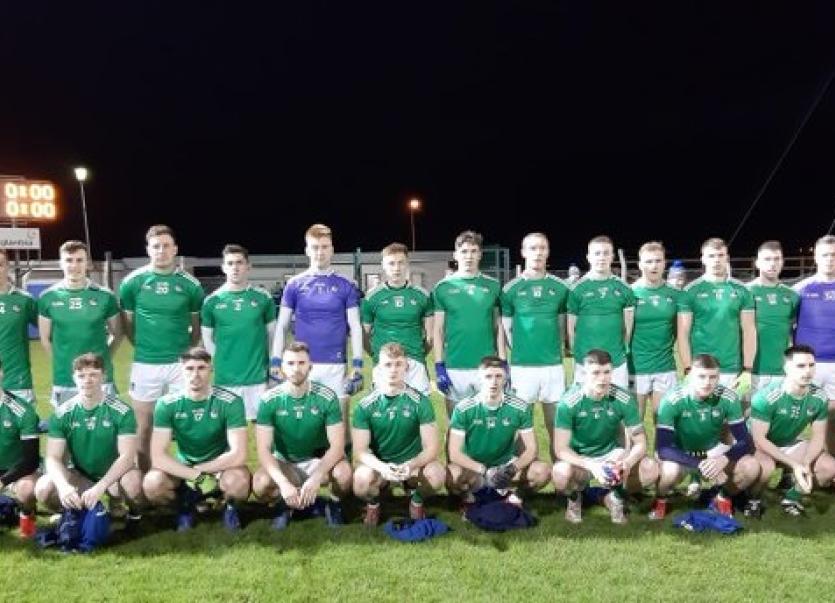 RESILIENT Limerick opened their Division 4 Allianz Football League campaign with a gritty 1-10 to 0-10 victory over Waterford in Fraher Field, Dungarvan on Saturday night.

A first half goal from Adrian Enright and three second half points from play from Danny Neville proved crucial scores as the McGrath Cup champions began their promotion push in the best possible fashion.

The sides had been level, 1-3 to 0-6, at half-time. Limerick created a dozen scoring opportunities during the opening 35 minutes, but only managed to avail of four of them.

The industrious Shannonsiders' were more clinical in the scoring zone after the restart, outscoring their hosts 0-7 to 0-4 in the second period to seal a vital victory.

Limerick will be pleased to get their Division 4 campaign off to a winning start, having began the year in such encouraging fashion, by claiming their first McGrath Cup final success since 2005.

Away wins are difficult to come by in the Allianz Football League and Waterford proved stubborn opponents, as they had done with the Shannonsiders' edged past them in the McGrath Cup at the start of the month.

Next up for Limerick is a Round 2 league fixture with London at Kilmallock on Sunday, February 2, at 12 noon.

Limerick finished Saturday evening's game with 13 players as defender Paul Maher was dismissed after picking up the second of his two yellow cards in the 57th minute.

Bob Childs was then sent off in stoppage time after been shown the second of two yellow cards. That dismissal was too late to really impact on the outcome of the game. However, Limerick will be pleased with the manner in which they coped with Maher's dismissal as there was still 13 minutes of the 70 minutes and, what turned out to be four minutes of added time, to go.

Billy Lee's side were recording their second win over Waterford in the Dungarvan venue in the month of January following their McGrath Cup success over the Deise at the start of the New Year.

Limerick's starting line-up showed one change to the selected one as Josh Ryan came into the attack in place of Gerard Stack, who had been due to make his league debut in the fixture.

The McGrath Cup champions did hand one league debut in the game to Galtee Gaels wing back, Bob Childs.

Limerick took the lead after just 35 seconds when Seamus O'Carroll landed a fine point from play after a neat build-up. The Waterford reply was instant, however, as full-forward Brian Lynch kicked the home side level with 90 seconds gone.

And the home side hit the front in the fourth minute after Jason Curry converted a straight forward free. It was the second of four points on the bounce from the home side.

The game was open and attractive to watch during that opening 10 minutes although a short, sharp rain shower made the playing surface and handling conditions slippery.

Waterford increased their lead to two-points, 0-3 to 0-1,  when Darragh Corcoran kicked a neat point off his left in the ninth minute.

The home side moved three points to the good when captain Conor Murray weaved his way through the visitors' defence before flashing a fine effort over the crossbar in the 11th minute.

Limerick created the first real goal scoring chance of the game three minutes later when Cillian Fahy set up Danny Neville. However, his shot for a goal was parried by Waterford 'keeper Paudie Hunt, while a follow-up effort from the Ballysteen clubman was smothered on the line by a retreating Deise' defender.

The visitors were not to be denied a minute later, however, when Padraig de Brún and Iain Corbett combined to set Neville inside the Waterford cover. Neville played a clever pass across the goal for the in-rushing Adrian Enright to finish to the net and tie the scores, 1-1 to 0-4.

After Murray had restored Waterford's one point advantage, the Shannonsiders' drew level again, this time through goalkeeper Donal O'Sullivan who came upfield to kick a 35-metre free.

The Limerick netminder repeated the dose in the 32nd minute converting a second free of the game from pretty much the same position on the pitch to earn a 1-3 to 0-5 advantage.

The see-saw nature of the scoring continued, however, when Waterford drew level thanks to a 34th minute pointed free from Curry.

The sides remained deadlocked, 1-3 to 0-6 until half-time. Limerick will have been disappointed not to convert a greater portion of the 12 scoring chances created in that opening period, including five efforts which few wide.

Just as in the first half, Limerick made the perfect start to the second half when Tommy Griffin pointed superbly on the turn for a 1-4 to 0-6 advantage.

Goalscorer Adrian Enright then kicked a fine point from play to stretch their advantage to two points, 1-5 to 0-6, after 41 minutes.

Back came Waterford again, however, and a pointed free from Curry left the minimum margin between the sides.

Limerick's lead was back to two points when Neville kicked a fine individual point in the 50th minute.

And Neville put some daylight between the sides when landing his second point of the night just two points later for 1-7 to 0-7.

That score was quickly followed by a fine point from Cillian Fahy which suddenly left four points between the sides.

However, Waterford remained well in the contest and Murray left a goal between the sides, 1-8 to 0-8, with a 54th minute point from play.

Limerick quickly restored their four-point lead when Josh Ryan fisted a 55th minute point after he was set up by substitute Tommie Childs, before the home side reduced their appears to a goal once again with another pointed free from Curry.

Limerick were down to 14 men when Paul Maher was sent off for two yellow cards in the 57th minute.

However, the Shannonsiders dealt impressively with the setback, limiting Waterford to a single point from a Curry '45 in stoppage time.