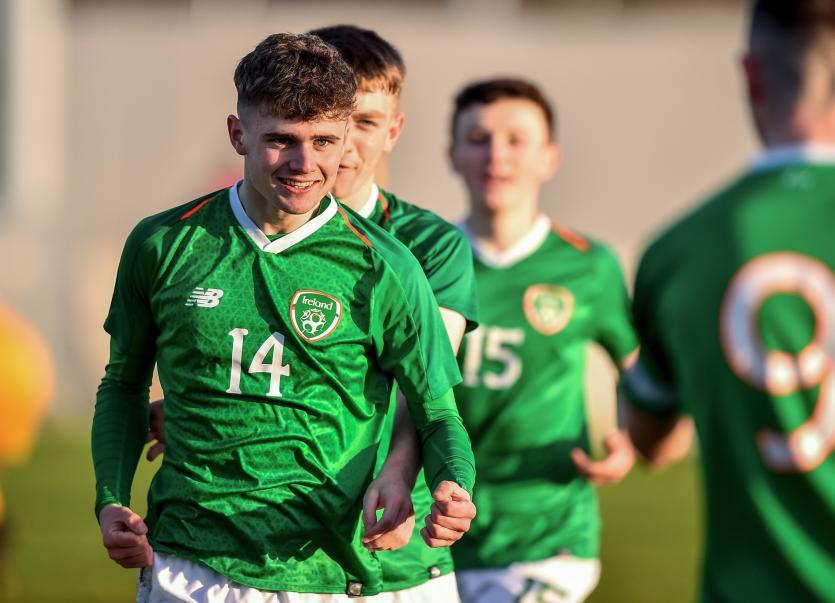 LIMERICK teenager Brian Ahern scored both goals as the Republic of Ireland were 2-0 winners over Australia.

Hazelwood College star Ahern was the match winner with two brilliant second half goals as the Republic of Ireland U18 boys came from a goal down to edge out the Austrialia Schools for a 2-1 win in a friendly international at Home Farm FC.

Ahern was one of several players that Ireland head coach William O’Connor introduced at the break as he juggled his squad in an effort to break the deadlock after a scoreless opening half.

The Limerick United forward a pupil at Hazelwood College in Dromcollogher made his mark in fine style on the hour by powering home the equaliser with a 30 yard screamer that sailed past a helpless Thomas Rozman in the visitors goal.

"Brian (Ahern) did really well to get us back on top with two great goals. The first one in particular was some strike," said the Irish manager.

"Overall all the squad did brilliantly and there were some fine individual performances too which bodes well for our bid to regain the Centenary Shield with the first of our four games a home fixture against Scotland coming up on March 19".

O'Connor added: "Games against Australia are always difficult as our side are all U18 while they are U19 but we responded well after conceding the early second half penalty."

The Irish students will have a trial game against Colin O’Brien’s U17 select in a few weeks time as O’Connor attempts to whittle the squad down to 16 players for the Centenary Shield fixture at the end of March.

Ahern's goal got Ireland right back into a game that looked to be slipping away from them after Sasha Kuzevski had earlier put Australia in front beating goalkeeper Patrick McGarvey from the penalty spot after he was taken down in the box by Mark Hanratty.

Ahern wasn’t finished and minutes after he struck the equaliser he went on to crown a top class show by climbing above the Australia defenders to head home what proved to be the winner.

The goal was created by Lucan CBS scholar Kyle Robinson’s precise pass that gave Hanratty the chance to whip in a high cross from the left and Ahern managed to get his head on the ball and guide it home for a superb double.

The penalty coolly converted by Kuzevski on 56 minutes put Australia in the driving seat although a fantastic double save from goalkeeper Rozman who kept out close range efforts from Robinson and Ahern might have seen Ireland get back on terms.

However minutes later Ahern got another opportunity to make amends and this time he made no mistake with his superb finish from distance.

That equaliser shook the visitors and when Ahern quickly headed home his second there was no way back as the Irish grew in confidence with Eoin Farrell and Adam Verdon dominating the midfield and Kyle Robinson and Brian Ahern always lively up front.