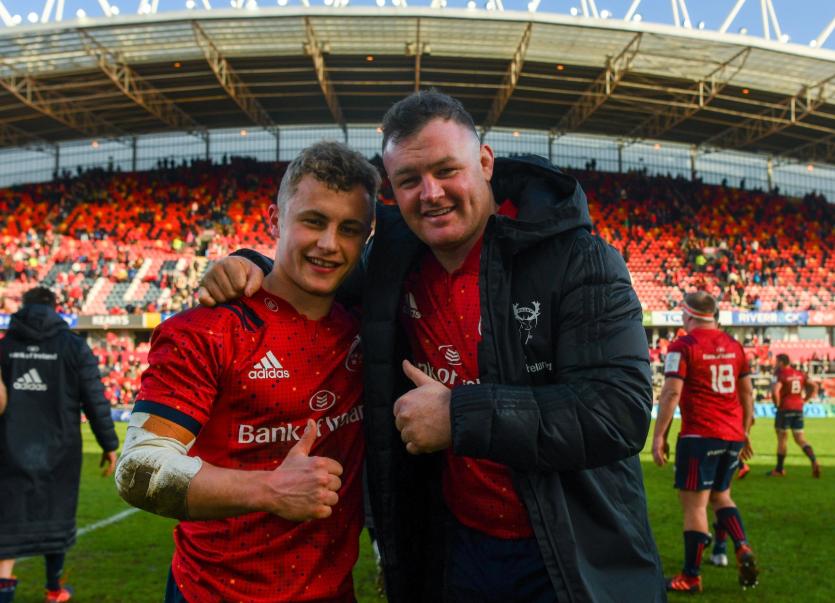 Craig Casey, left, who scored his first European try and Dave Kilcoyne, who made his 50th Champions Cup appearance in Munster's bonus point win over Ospreys at Thomond Park yesterday

Munster's hopes of reaching the Heineken Champions Cup quarter-finals this season had disappeared before kick-off. However, that didn't stop Van Graan's charges from putting the struggling Ospreys to the sword, scoring five tries in all, after a slow start to the game, in their final Champions Cup pool game of the season.

Twenty two-year-old Calvin Nash caught the eye on his Champions Cup debut when starting on the left wing, while 20-year-old Craig Casey scored his opening try in Europe to secure the bonus point after being introduced as a replacement.

Young Munster clubman Nash, a former Crescent College Comprehensive school's star, has now made 17 appearances for Munster, since making his competitive debut against Edinburgh in February 2017.

Speaking in the post-match press briefing head coach van Graan said he was very impressed with how both players acquitted themselves.

In relation to Nash, van Graan said: "I thought he was close to our best player out there today. I thought did defended really well, first and foremost. He was very good in the air. He got that poach on the sideline in a crucial part of the second half and that chip and chase, unfortunately he couldn't finish that but he's got blistering speed and he's also a guy who sits behind two starting internationals.

"I just had a moment with him before the game and I said, 'you've got to make sure that we can't leave you out after today's performance' and after today, a lot of guys will to fight really hard in the next block to keep him out of the team."

Casey also caught the eye in his appearance off the bench in the second half, culminating in his bonus point try when he showed excellent footwork and awareness, stepping inside experienced Welsh international Dan Lydiate to score.

Van Graan said: "He's (Craig Casey) come on pretty well. When I came to Munster he was injured for quite a long time. Then had a good Six Nations with the U20s last year and a really good World Cup.

"We're blessed with pretty good 9s. He kept working in training. He's a doer and he's somebody who wants to improve his game.

"I thought we managed to improve his game-time well over the last few months and really excited about what he brought today.

"He's a small man, but he's going to play a big part in Munster's future. I'm really happy for him to score that try."

Exciting out-half Ben Healy made his Champions Cup debuts off the bench in the second half. Academy player Healy, who plays his club rugby with Garryowen, captained Glenstal Abbey to their first Munster Schools Senior Cup title just under two years ago in March 2018.

Another Munster Academy player, the highly exciting back-rower Jack O'Sullivan also made his European Cup bow when introduced as a second half replacement in the game, while Fineen Wycherley made his first Champions Cup start at Thomond Park.