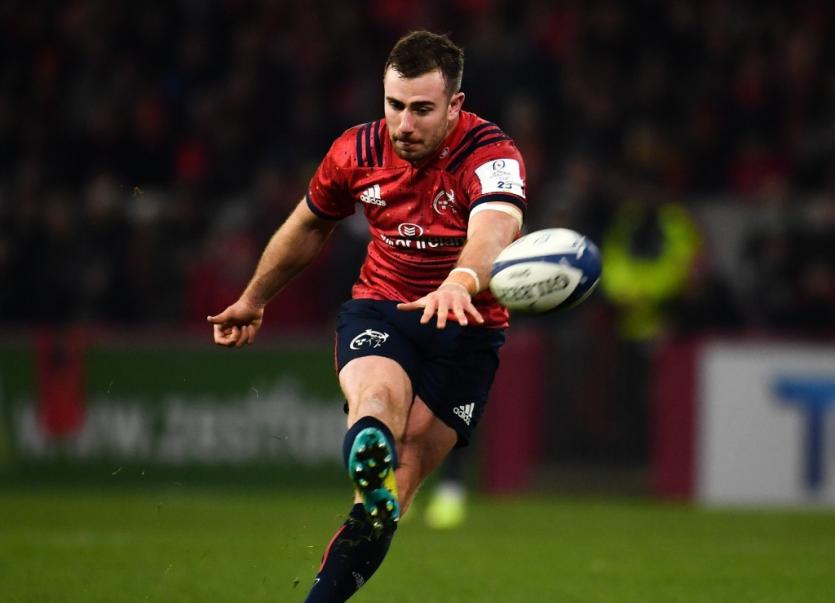 Out-half JJ Hanrahan has been passed fit to start for Munster in Sunday's crucial Heineken Champions Cup clash with Racing 92 in Paris, 3.15pm

Out-half JJ Hanrahan has been passed fit to start in the number 10 shirt.

Hooker Niall Scannell will become the 15th member of the current Munster squad to hit the 100-cap landmark for the province in Sunday's Pool 4 clash.

The 27-year-old, who has also earned 20 Ireland caps, made his senior Munster debut at Musgrave Park in December 2013 against Scarlets.

The squad will go through their final training session at UL this Friday afternoon and fly to Paris on tomorrow, Saturday.

Peter O’Mahony captains the side with eight changes to the team that faced Ulster last weekend.

Mike Haley is named at full-back with Andrew Conway and Keith Earls starting on either flank.

Rory Scannell and Chris Farrell pair up in the centres with Conor Murray and Hanrahan forming the half-back partnership.

Dave Kilcoyne, Niall Scannell and Stephen Archer pack down in the front row with Jean Kleyn and Billy Holland in the engine room.

O’Mahony, Jack O’Donoghue and CJ Stander are named in the back row.

Craig Casey and Shane Daly are both among the replacements and could make their Champions Cup debuts.

Meanwhile, former Munster star Donnacha Ryan is listed among the Racing 92 replacements for Sunday's game in the French capital.