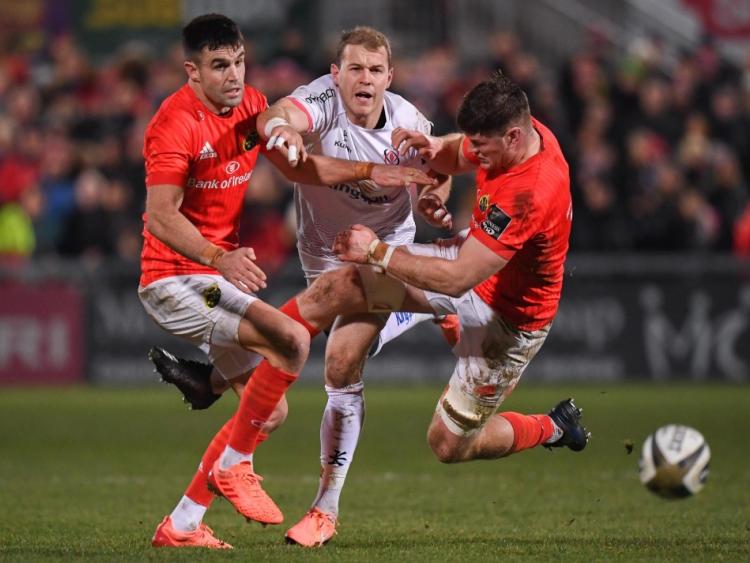 Will Addison, of Ulster, kicks under pressure from Munster's Conor Murray and Jack O'Donoghue in their Guinness PRO14 clash at Kingspan Stadium on Friday night

MUNSTER suffered a fourth defeat in their last six games in all competitions when succumbing 38-17 defeat to high-flying Ulster in their Guinness PRO14 interprovincial fixture at Kingspan Stadium, Belfast on Friday night.

A hugely impressive Ulster side ran in five tries in all to consign their hosts to a heavy defeat just nine days before Johann van Graan's side travel to Paris for a must-win Heineken Champions Cup clash with Racing 92.

Ulster have not lost in Belfast in all competitions since October 2018 and despite taking an early 7-0 lead, Munster never looked likely to inflict a defeat on the home side.

The defeat sees Munster surrender top spot in Conference B of the Pro14 following Scarlets victory in their own Welsh derby.

Munster, with 10 changes from the side which lost at home to Leinster just six days earlier, were well beaten on the night.

The game did see fit-again out-half Joey Carbery make his first start of the season for the province. Munster will be boosted next week for the crucial clash with Racing 92 by the return of the likes of CJ Stander, Chris Farrell, Jean Kleyn and Mike Haley.

Munster made a fine start after captain Peter O'Mahony forced a crucial relieving penalty at the breakdown. The visitors forced a penalty inside the Ulster '22 in the tenth minute. From the set-piece referee Dan Jones awarded penalty advantage to Johann van Graan's side and full-back Daly showed terrific pace and power and a composed finish to dot down.

Out-half Joey Carbery, making his first start of the campaign, duly added the conversion for 7-0.

Munster full-back Shane Daly goes in at the corner from Joey Carbery's pass to score the first try of the night in Belfast.

Carbery kicks the conversion from the touchline.

However, the advantage was short-lived as Joey Cooney slotted a 14th minute penalty goal for the home side as Munster were penalised for 'holding on'.

Cooney bagged his sixth try in seven games when producing and terrific step to outstrip the Munster defence in the 18th minute and help the home side in front at 8-7. The scrum-half also kicked the conversion for 10-7.

Munster survived a real scare in the 25th minute when Ulster again stretched the visitors' defence to breaking point, only for full-back Will Addison to knock the ball on as he rampaged forward deep inside the '22.

Munster, who were doing well in disrupting the Ulster line-out in the opening half an hour, coughed up their sixth penalty of the half in the 31st minute. In contrast, Ulster were pinged just once during that spell.

John Cooney goes in under the posts to finish off a flowing Ulster move, then kicks the extras as well.

Ulster opted for the scrum inside the visitors '22, From the set-piece and with referee Jones playing another advantage, the home side opted to move the ball wide through Stuart McCloskey off a huge carry from Ian Henderson and winger Robert Baloucoune scored in the right corner. Cooney's conversion made it 17-7 after 36 minutes.

Week in. Week out. Baloucoune does not disappoint.

Munster did have an opportunity to reduce their appears just before half-time after Henderson was penalised at the breakdown and Carbery duly landed the kick to see Ulster's lead cut to 17-10 at the change of ends.

Munster were left stunned just three minutes into the second half after Matty Rea scored a fine team try off a smashing line of running, following excellent approach play from the home side. Cooney duly added the extras for 24-10.

Ulster continued to dominate the game as the second half wore on. The home side had their bonus point try in the 59th minute when Stuart McCloskey powered over for the bonus point try. Cooney's conversion increased the lead to 31-10.

"Individually, the Munster players have not been good enough over the past two weeks."

Ireland winger Jacob Stockdale showed his poacher's instinct when intercepting a pass on the Munster 10 metre line, before racing clear to score the home side's fifth try. The 'extras' made it 38-10.

To their credit, a soundly beaten Munster sit managed to score their second try of the game off a well-executed maul, with hooker Niall Scannell dotting down in the 66th minute. Carbery's conversion made it 38-17 to the home side.

Munster finished the game with 14 players as replacement back-row Chris Cloete was sin-binned for flipping an Ulster player over.

Ulster too lost a player to the sin-bin before full-time with Kyle McCall yellow-carded late on.