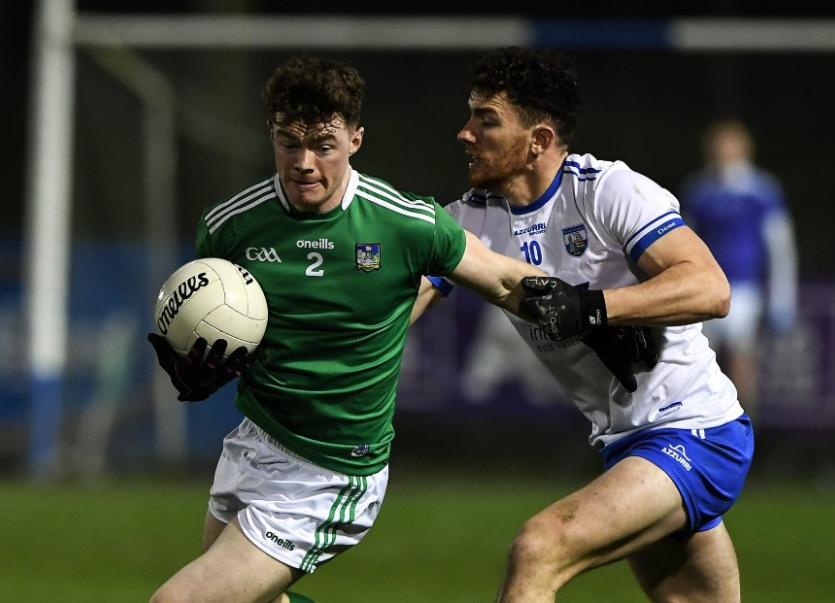 LIMERICK booked their place in the McGrath Cup football final with a 2-10 to 0-10 win over Waterford this Thursday evening.

Billy Lee's side now play Cork in the final of the early season provincial competition on Saturday January 11.

It’s 2007 since Limerick last met Cork in a McGrath Cup final - Limerick are winners of the early season provincial competition on five occasions but the last title was in 2005.

Limerick failed to score for 24-minutes of the second half but had built a solid first half foundation.

The visitors to Dungarvan had to play the final 20-minutes with 14-men.

Limerick were 1-7 to 0-2 ahead at half time after playing with the breeze in Fraher Field, where the attendance was 187.

It was a half in which there was just one point on the scoreboard as the stopwatch reached the 20th minute mark.

Limerick had seven wides and Waterford five wides in the half.

Ryan Glynn fisted the opening score in the eighth minute but scores weren't plentiful in the opening minutes.

It was into the 21st minute when full back Garrett Noonan had the game's second score and another minute before Waterford opened their account.

Debut boy Gerard Stack had two points in the first half to help Billy Lee's men towards their eight point interval lead.

Danny Neville was denied a 25th minute goal by defender Mike Kiely but the Ballysteen man was to find the net later in the half.

When The Decies had their second point in the 28th minute, the scoreboard read 0-4 to 0-2.

Limerick finished out the half with four unanswered scores.

The goal came four minutes from the half time whistle - Neville with a neat finish after breaking a tackle on the '21 metre line.

Limerick had six scorers in the opening half and among them were two points for goalkeeper Donal O'Sullivan - a '45 and free.

Waterford opened the second half with four successive points inside eight minutes to reduce the lead to 1-7 to 0-6.

Both sides then went 10-minutes without a score before Mike Kiely and Brian Lynch had quick-fire 52nd minute Waterford scores to leave just one point between the teams and Limerick still to reopen their account.

Then Limerick were reduced to 14 men when midfielder Josh Ryan was shown a red card in the game's 54th minute.

And it got worse in the 57th minute when substitute Seamus O'Carroll was sent to the sinbin for 10-minutes.

Finally 24-minutes into the second half Limerick reopened their account when wing back Cillian Fahy pointed to leave it 1-8 to 0-9.

Waterford scored just once while O'Carroll was off the field and on his return Limerick had rapid points in succession from Jamie Lee (free) and O'Carroll himself and all of a sudden the lead was 1-10 to 0-10 entering four minutes of injury time.

The victory was sealed in injury time by a Gerard Stack goal.