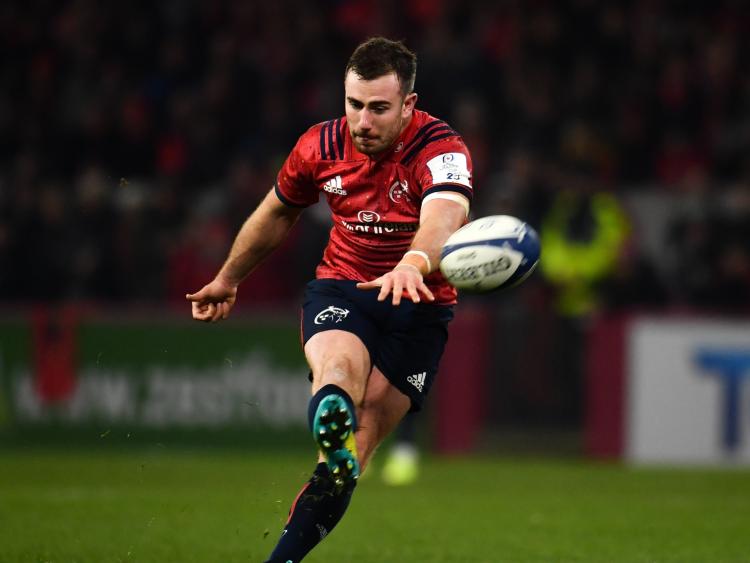 MUNSTER out-half JJ Hanrahan insists that if the opportunity to land a match winning drop goal in the mammoth Heineken Champions Cup clash with Saracens arises, he won't shy away from it.

Hanrahan was off target with a drop goal attempt late on in their Champions Cup Pool 4 fixture with Racing 92 last month in an otherwise excellent display from the talented playmaker.

Looking back on that late drop goal attempt against Racing 92, Hanrahan said this week: “Obviously I was massively disappointed. You can’t tiptoe around it. Of course you are disappointed if you get that opportunity as a number ten. That’s what you pride yourself on.

“As a younger child growing up you always want those winning opportunities. But the thing about rugby and the thing about life in general if one opportunity is going to hamper for you for the rest of your life then you are going to fail pretty quickly.
“You have got to be able to get back on the horse. I came back in Monday morning and went on to Edinburgh.

“It is obviously a disappointing thing. You get back to training, go through your processes and you start repping it again, the next time an opportunity comes you don’t shy away for it and you go for it again.”

Asked if he would do anything differently if he had the occasion back again, the out-half replied: “Kick it over!”

With Ireland out-half Joey Carbery looking set to be sidelined for Munster until the end of the month with an ankle injury and New Zealander Tyler Bleyendaal ruled out for some time with neck stiffness, Hanrahan is set to steer the province through the crucial fixtures with Premiership champions Sarries'.

Asked about the staying relaxed ahead of crucial fixtures like Saturday's Round 3 clash which is set to be a sell-out at Thomond Park, Hanrahan revealed: “I’m usually worse at the start of the week and I get better as the week goes on.

“It’s when you don’t have a plan you are ‘oh, what’s going to happen here’, then you start to meet with the coaches, sit down with a plan for the week. When you start integrating a plan you start building confidence from that. Like anything when you look at the bigger picture, it can be overwhelming, but then when you start breaking it down and making a plan you kind of settle in to it.

“Then from Wednesday afternoon on it is really down to individuals getting themselves ready.

“It’s horrible when lads get injuries and we don’t need that or want that in a squad, but yeah the responsibility comes on and I think you have to kinda thrive on that responsibility.”

Munster sit joint top of Pool 4 of the Heineken Champions Cup along with Racing 92 on seven points. Saracens, who Munster face at Alianz Park on Saturday, December 14, 3pm, are in third spot on five points.