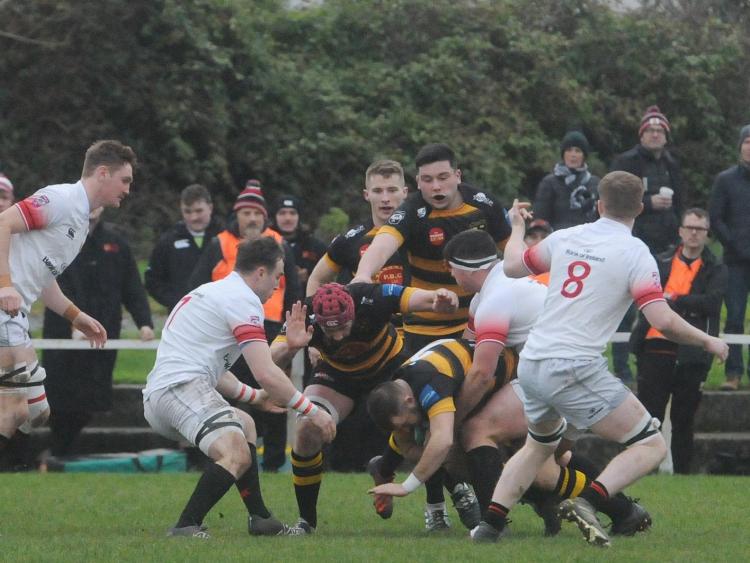 THERE were four Limerick wins on a dramatic day for local sides as action resumed in the Energia All-Ireland League.

In Division 1A, Garryowen are up to third place in the table after scoring an excellent 27-14 away victory over Terenure College at Lakelands, while also in the top flight, Young Munster have eased their relegation worries after scoring a precious 28-24 bonus point win over Dublin University at Clifford Park.

There was disappointment for Shannon in Division 1B, however, as the Parish side succumbed 24-20 at home to Old Wesley.

In Division 2A, free-scoring Old Crescent picked up a bonus point in their convincing 43-16 home victory over Ballymena at Rosbrien.

In the same division, UL-Bohemian remain rooted to the foot of the table after suffering a 15-8 defeat away to high-flying MU Barnhall.

Meanwhile, in Division 2C, Bruff got back to winning ways after securing a gritty 14-10 home success over Sunday's Well at Kilballyowen Park.

Garryowen are up to a lofty third place in Division 1A after the Light Blues extended their winning run in the top division.

Garryowen led their hosts 12-7 at half-time, with tries from Liam Coombes and Colm Qulligan, while Jamie Heuston also added a conversion.

While Heuston added a penalty in the third quarter, 'Nure, coached by Sean Skehan, who had been a member of the Garryowen backroom team in recent seasons, hit back with a try to leave the Limerick clinging to a one-point lead 15-14.

However, Garryowen showed admirable resilience to regain their grip on the game as Diarmuid Barron's try was followed by Coombes' second five-pointer of the day as the Dooradoyle side sealed an excellent victory on the road.

Also in Division 1A, Young Munster made it back to back wins in the top flight when easing past Dublin University 28-24 in a precious bonus point success at a Tom Clifford Park.

The win moved Munsters', who had been in the relegation play-off position prior to kick-off, up to a more comfortable sixth place in the table.

Gearóid Prendegast's side made an impressive start to the game with the Dublin students as tries from Gavin Coombes and the free-running Alan Tyan inside the opening 13 minutes, both converted by out-half Evan Cusack, saw the home side build a significant 14-0 lead.

Dublin University rallied with 10 unanswered points to reduce their half time arrears to just four points, 10-14.

However, Munsters' took a firm grip on the game with two smashing tries in three minutes, courtesy of Keelan Stephenson and full-back Tynan, who was dotting down for the second time. Cusack converted both for a comfortable 28-10 lead.

However, Dublin University made it a somewhat sweaty finish for home supporters as two converted tries late on left just four points between the sides at full-time.

AIL 1A Updates standings following receipt of all results. pic.twitter.com/JMpOrs5Xvb

Meanwhile, in Division 1B, a late Ikem Ugwueru try secured a losing bonus point for a frustrated Shannon side who succumbed to a 24-20 defeat to Old Wesley.

The result sees the Parish side drop down to sixth place in the table on he back of their third defeat in their last four AIL fixtures.

High-flying Old Wesley took an early when Paul Derham touched down off the back of a ruck. Shannon responded well and were duly rewarded for their efforts when Kelvin Brown went over for a try.

The hosts took the lead for the first time when a Billy Gray penalty from out wide edged Shannon in front. Rory Stynes kicked over his first penalty of the afternoon to edge Old Wesley ahead once again.

On the stroke of half-time the Dublin side extended their lead. An unconverted Thomas O'Callaghan try put seven points between the two sides, 15-8 in favour of Old Wesley.

After the restart, Wesley took full advantage of some poor discipline from Shannon as Stynes kicked over two further penalties.

An immediate response from Shannon saw Tom Ahern break through the Wesley defence for his side's second try to make it 21-13.

Stynes fourth successful penalty of the game put 11 points between the teams but credit to Shannon they fought to the end.

Ugwueru scored at the death to grab a losing bonus point as Shannon suffered their second defeat in a row.

In Division 2A, free-scoring Old Crescent scored seven tries in all in disposing of Ballymena's challenge.

Crescent led the Ulster side 21-13 at half-time, with the Limerick side having tries from Jack O'Mahony (2) and Jack Hogan, with Maccon Casserly kicking three conversions.

In the second half, the home side added four more tries from Val McDermott (2), Niall Hardiman and Ed Barry while Casserly brought his tally of conversions to four.

Also in Division 2A, UL-Bohemian remain rooted to the bottom of the table, despite picking up a losing bonus point in their 15-8 away defeat to table toppers MU Barnhall.

The Red, Red Robins trailed by just two points, 3-5, at half-time, with Harry Byrne kicking a 27th minute penalty for the Annacotty side.

UL-Bohs, who have managed to win just one of their seven AIL fixtures this season, did manage to cross the whitewash in the second half when Ogie Scannell pounced on Robbie Bourke's crossfield kick to score.

Meanwhile, in Division 2C, Bruff jumped back up to fourth place in the table in the wake of their excellent 14-10 win over Munster rivals Sundays Well.

Bruff rallied from trailing 0-7 at half-time to secure a hard fought win, scoring two tries in the second period, including one from Graham Whelan which was converted by Kevin McManus.

The South Limerick side are level on points with third-placed Omagh with two rounds of fixtures still to come before the Christmas break.