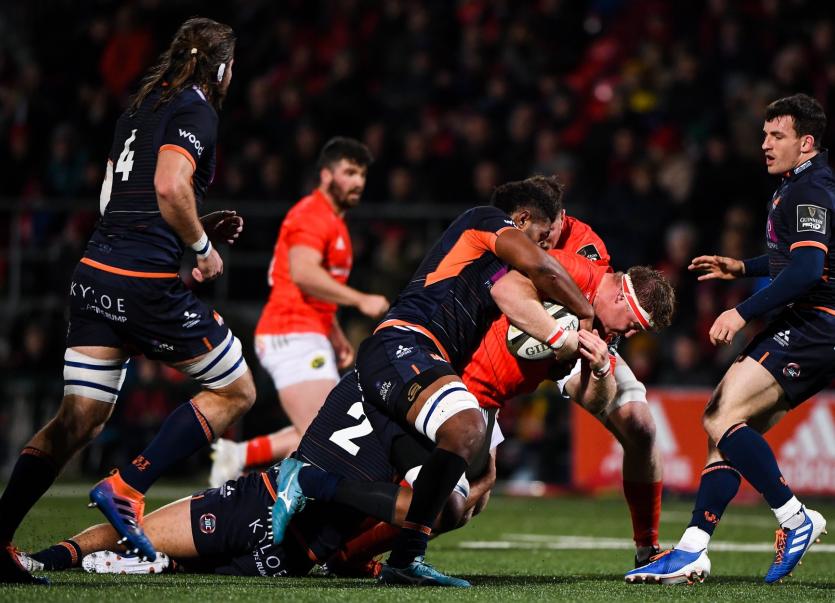 MUNSTER lost out to Edinburgh for the first time in Cork since 2004 as the much-changed home side suffered a 16-18 reverse in the Guinness Pro 14 before an official attendance of 7,580 on Friday night.

A final quarter try from winger Eroni Sau proved crucial in the outcome as Munster suffered just their second defeat in their last 10 meetings with Edinburgh in all competitions.

This was Munster's first home defeat in either Cork or Limerick since since their December 2017 loss to Leinster at Thomond Park.

Munster had made 14 changes from the starting line-up which drew with Racing 92 at Thomond Park just six days earlier for their top of the table Conference B clash with the Scots.

Munster had recovered from falling 10-0 in arrears after the opening quarter, to led 16-10 just 12 minutes into the second half.

However, the concession of a 55th minute penalty to replacement out-half Simon Hickey and that 63rd minute try to the powerful Sau ultimately turned the game in the visitors' favour.

"This one hurts, it's one that got away."

Munster's second defeat of their Conference B campaign saw the table toppers lead over second-placed Edinburgh cut to just two points. The Scarlets sit in third place in the conference a further two points behind.

The game saw prop Stephen Archer lead the home side out on his 200th Munster appearance as the tighthead became just the 11th Munster man to reach the landmark.

Academy man Ben Healy made his first PRO14 start for Munster at out-half and the former Glenstal Abbey Schools Senior Cup winning captain turned in a competent display, landing all four of his kicks at goal.

23 phases of play, and Tommy O"Donnell finally gets over the line for Munster's first try of the evening at Irish Independent Park.

Man of the Match Jack O’Donoghue captained the side and was the only player retained from last week’s thrilling Champions Cup draw against Racing 92.

Munster and their visitors were tied 10-10 at the end of an opening half which featured a huge amount of box kicking from both sides.

Munster made the worst possible start when the home side failed to deal effectively with the kick-off. The home side conceded a five-metre scrum, from which Edinburgh centre Matt Scott barrelled over.

The visitors' lead was extended to 10 points with a Jaco van der Walt penalty.

Back came Munster, however, and play-maker Healy slotted their first points of the game with a 23rd minute penalty.

"We had a few opportunities in their half and we didn't capitalise on them."

And then after 23 phases battering at the Edinburgh line before the break, some quick thinking by back-row Tommy O’Donnell was rewarded by the TMO with Munster awarded their opening try.

Tipperary native Healy again slotted the extras to make it 10-10 at the break, and the fly-half was clearly warming to his task with a booming penalty upon the resumption for a 13-10 lead.

The 20-year-old out-half added another for a 16-10 lead for Munster who looked to have weathered the storm.

Pierre Schoeman went close for the visitors minutes later but for a Jack O’Donoghue tackle.

Replacement Hickey drilled a penalty to trim the lead to three points. Edinburgh were not done there and with a penalty advantage to come, Kinghorn chanced a kick to the corner and Sau juggled and gathered to go over for the pivotal score.

And try as they might, an experimental Munster could not summon a response in the final quarter as Richard Cockerill’s side held on for a narrow win.