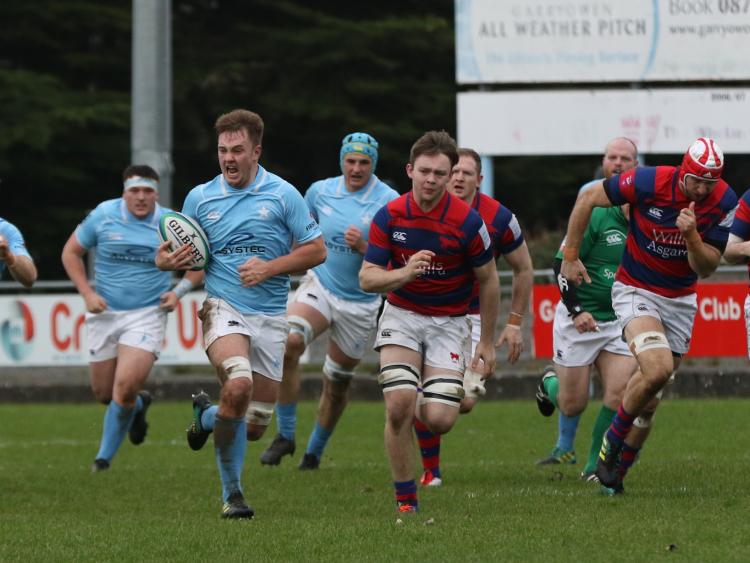 Flanker Johnny Keane makes a break for Garryowen in their energia All-Ireland League Division 1A clash with Clontarf at Dooradoyle on Saturday Picture: Kieran Ryan-Benson

THERE were just two Limerick wins on a mixed day for local clubs in the Energia All-Ireland League on Saturday.

Both Limerick wins came in Division 1A where Garryowen made it three wins on the bounce when edging past Clontarf 13-10 in a gritty display at Dooradoyle.

Garryowen were the only Limerick side to have a home fixture this weekend as the other five sides were on the road.

Also in the top flight, resilient Young Munster scored their first win of the campaign at the sixth attempt when overcoming Lansdowne 7-0 on the back pitch at the Aviva Stadium.

In Division 1B, Shannon had to be content with picking a losing point from a 16-14 defeat away to Naas.

There was no joy for the two local sides competing in Divison 2A of the AIL as Old Crescent suffered a 32-10 defeat away to Rainey Old Boys, while UL-Bohemian did pick up a losing bonus point in their 20-15 reverse away to Buccaneers.

In Division 2C, injury-hit Bruff suffered a 51-12 thumping defeat away to Omagh.

Garryowen's third success on the bounce in Division 1A sees the Light Blues jump up into the play-off positions, level on points with third-placed Terenure College.

On a cold, dry day at Dooradoyle, Garryowen raced into a 6-0 lead against Clontarf are 26 minutes with two penalty goals from full-back Jamie Heuston.

However, the Dubliner cranked up the pressure before half time, as Garryowen had a player in the sin-bin and a run of 10 unanswered points, including a well-worked try, had the visitors 10-6 to the good at half-time.

The crucial score of the half arrived eight minutes after the restart after Garryowen were awarded a try and a well-executed maul was hauled down illegally deep inside the 'Tarf 22.

The visitors made a formidable attempt over the closing quarter to try and turn the tables in their favour once again. However, a superb defensive display from the home side ultimately won the day for Conan Doyle's charges.

Young Munster moved off the bottom of the 1A table, swapping places with their opponents Lansdowne as the Clifford Park side emerged with a long awaited win from their trip to Dublin 4.

The only score a pulsating game arrived on the hour mark after a scoreless opening half. Luke Fitzgerald grabbed the game's only try for the Limerick side, with Evan Cusack nailing a difficult touchline conversion.

The results sees Munsters' up to ninth place in the table, one point ahead of basement side Lansdowne and just two points adrift of both Ballynahinch in eighth and Dublin University in seventh.

Meanwhile, Shannon dropped one spot to fourth in the table after succumbing by two points to Naas.

Shannon led their hosts 7-3 at half-time, thanks to a first half try from Conor Glynn, which was converted by Ben Daly.

Naas hit back with two penalty goals in the second half to lead 9-7 before Shannon struck for their second try, scored by Pa Ryan in the 70th minute. Daly's conversion made it 14-9.

Naas were not done yet, however, and a converted try in added time saw the Co Kildare side claim the four points on offer.

In Division 2A, Old Crescent remain in fifth place in the table in the wake of their 22-point defeat away to second-placed Rainey Old Boys.

Crescent were left with a mountain to climb in the second period after falling 20-0 in arrears in the opening 40 minutes against impressive opponents.

Maccon Casserly opened the Limerick side's account with a 46th minute penalty goal, but two further Rainey tries, including the bonus point score in the 62nd minute, saw the home side build an unassailable 32-3 lead.

Crescent did manage a try in the 70th minute from Cathal Monaghan, with Casserly adding the extras.

Meanwhile, UL-Bohs' hopes of making it back-to-back league wins were ended in their defeat to Buccaneers at Dubarry Park.

After falling 7-0 in arrears, UL-Bohs rallied with a try from Kieran O'Shea in the 27th minute, before a further penalty and try had the home side leading 15-5 at half-time.

Buccs' stretched their lead to 20-5 with their third try of the game in the 54th minute, before a 76th minute try from Mike Mullally, which was also converted, reduced the Midlanders lead to eight points 20-12.

To their credit, UL-Bohs secured a merited losing bonus point when Harry Byrne kicked a crucial penalty late on.

The Red, Red Robins currently sit second-from-bottom in the 2A table, level on points with basement side Dolphin. UL-Bohs, with one win from their opening six AIL fixtures, trail eighth-placed Nenagh Ormond by three points with one third of the season now gone.

Finally, in Division 2C, Bruff came away from their long trip to Omagh empty-handed after suffering a 39-point loss at the hands of the high-flying Ulster side.

Bruff, who scored two tries of their own over the 80 minutes, trailed their hosts, 22-5 at half-time. A slick Omagh side added 29 points in the second half, easing clear.

The result has seen Bruff drop down to sixth place in the 2C table, but just a single point off the top four spots.