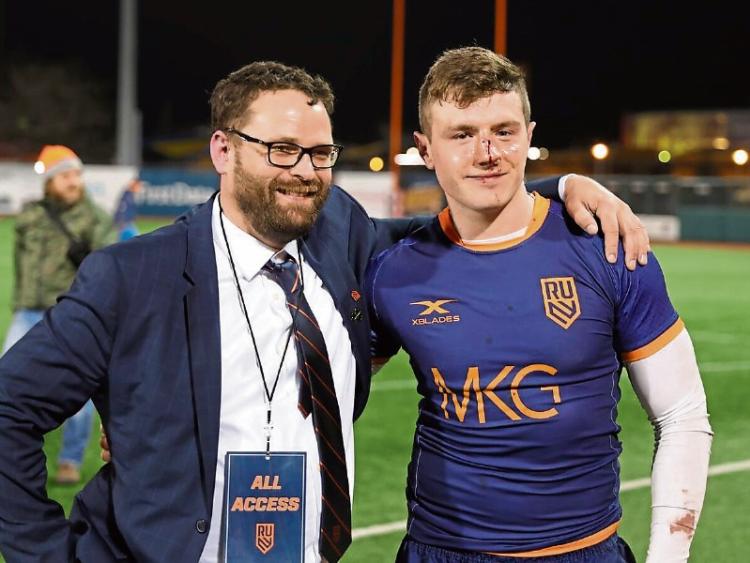 HE HAS come a long way from the days trooping through the corridors at famed rugby nursery St Munchin’s College to becoming the founder and owner of US Major League Rugby side, Rugby United New York (RUNY).

Last season, RUNY included former England and Northampton centre Ben Foden in their player roster and in 2020, he will be joined at the Big Apple’s first ever professional rugby club by former France and Toulon centre Mathieu Bastareaud.

Forty one-year-old James Kennedy laughs when he says he’s not one of those guys who will tell you he was a great rugby player because there are too many people alive who know the truth!

After St Munchin’s College, where he was a member of Schools Cup squads which included the likes of Jerry Flannery and Jeremy Staunton, Kennedy moved on to Waterford IT where he studied Computer Science and later Legal Studies.

In 1999, the Ballinahinch, Co Tipperary, man moved to New York. to work for the summer.

“I loved New York and I, stayed. I was working on the buildings. I had never worked on the buildings before. I grew up on a farm, so maybe knew a bit, but never did it before,” Kennedy said.

“I got hired and fired a lot the first couple of weeks, but settled into carpentry. I just loved it.

“In New York, no one ever asks you where are you from, what school did you go to, who you are? It is all about what can you do for me, all about hard work.

“I worked and partied. After a year, through a lad on a construction site, he said I should come play rugby with them that weekend. I didn't know the game of rugby was in America. I went along to play with a team called Lansdowne RFC in the Bronx, went to a training with three others, went to a game where 12 showed up and we won. I just enjoyed it. It was mad craic.”

In early 2013 Kennedy set up his own business, a construction management business. Finding employees was a problem initially but he sourced them, helped enormously by his decision to sponsor teams and programs such as Lansdowne and the Fordham Women’s Rugby.

Later Kennedy was contacted by then Pro12 when they began considering an expansion into the US, but the former loosehead prop did not believe that putting a New York club into the league was the right move.

“The Pro12s plan was to put an Irish team in New York, the fifth province. Early doors I felt the New York Celtics might work for a second, but I just knew it won't work. It has to be a New York team.

“After a few months, I went away from that. In hindsight I think I did the Pro12 a favour.”

But when Kennedy was approached later by Major League Rugby (MLR) with a view to having a New York side competing, his attitude was different. Currently there are 283 rugby clubs in the New York area, 35,000 active senior players as well as 20,000 youth players.

“MLR reached out to me, explaining they were a new professional league. There were six teams and we they wanted me to consider joining our league. Obviously you have to pay a fee to get in.

“Dean Howes, the MLR Commissioner, part owner of Real Salt Lake soccer team in Utah, and part owner of the Metro Stars back in the day, knows US sports, knew New York having lived there for 15 years, not a rugby guy which I liked and the business plan was pretty simple unlike the Pro 12 business plan.

“We negotiated. Nick Benson, the deputy commissioner of MLR, cut his teeth in the Indian Premier League, the cricket league, they came from different sports which is very refreshing. We had great conversations and after months of bickering and banter and negotiating, I signed up in November 2017.”

RUNY played an exhibition season in 2018, before competing in Major League Rugby for the first time in 2019. The team wears the orange and blue of the Mets baseball team and the ‘Knicks’ basketball team.

“I brought in Steve Lewis, a Scottish guy, as general manager. He knew all the players and he started talking to them. He identified leaders and I met with them. We talked to every club in the area.

“The background to Ben Foden signing is that it came about through the help of Alex Corbisiero, the former Northampton and England prop, who had moved to New York doing NBC work. He's from Queens. I reached out to him.

“I spoke with Ben and he flew out and stayed with me for a few days. This was early on before I had a general manager or before I had anything. Our training field was a park in Randall's Island, no dressing rooms.

“I told him about training outside at night, in January, in -20 degrees. If you are ok with that, great, but you could go to San Diego, I said, they are on the beach, weather is always good. You have to want to be here.

“We had a great conversation. He met the players. Ben’s influence on the players through last season, his guidance to the younger lads, his leadership role was huge.”

The cost of having a New York team competing in Major League Rugby in 2019 was just under $3 million.

James Kennedy explained: “The spend last year was $2.9 million. The money back in was about $1.1, so I lost about $1.8 million. I will lose more this year because we are putting more money in and you have to put money in.

“But we have done the financial modelling, sat with the accountants and my investor and future possible investors and ran the model every which way and it does turn in what would be our year three.

“Once it turns it starts turning dramatically. At that point you own your own houses, you have a stadium and I would say we will be announcing a stadium late January for 2021.

“For 2020 we are going back to play at Coney Island (MCU Park). The people there have been great. We have to truck on. If we wait for the perfect set up we will never have it.”

RUNYs playing roster in 2019 and into 2020 includes exciting Limerick centre Will Leonard, who has played with Shannon in the AIL.

Leonard is one of a number of Irish-born players plying their trade with the New York side.

Kennedy says the club is still looking for players for 2020.

“I am always looking for players. Greg Mc Williams, our head coach, is back from Japan, where he was the US backs coach.

“If people reach out to me I will pass them on to Greg.

“We are more than an Irish team. The squad is mostly made up of indigenous players. Seeing local players raise their game has been brilliant.

“The coaches, the physios, the players, we have all learned from having a season behind us in Major League. It is about taking what we have learned in the hope of getting better.”