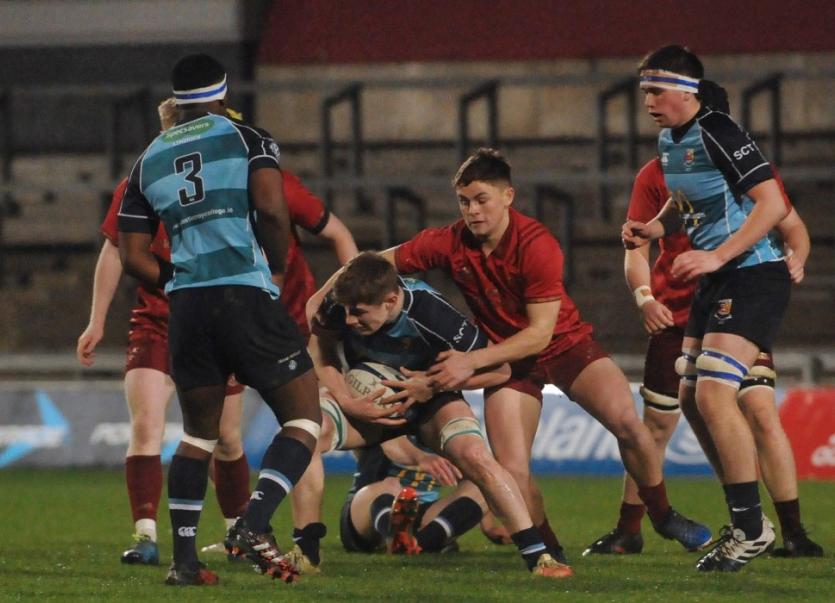 CASTLETROY College suffered a 15-3 defeat to a clinical Munster CSP amalgamation side in their Clayton Hotels Munster Schools Senior Cup Group A fixture played at a wet and cold Thomond Park on Wednesday evening.

Castletroy, who were unbeaten after their opening two round robin fixtures in the new-look Senior Cup, remained very much in the contest when trailing by just three points, 3-5 at half-time.

However, Munster CSP, a newly-formed team made up of club players from across the province, scored 10 unanswered points in the second period, to remain of Group A as a result of earlier wins over Bandon Grammar School and Ardscoil Rís.

Munster CSP had a had an excellent display in their pack once again from flanker Diarmuid Dennehy, of Bruff RFC. Galbally RFCs Bradley Ahern was also a key member of their matchday squad.

Castletroy College, who had beaten Bandon Grammar School and drawn PBC, of Cork, in their two previous round robin games fell behind to an 11th minute try at Thomond Park.

The Newtown students were attacking deep inside the 'Munster' half when the ball was intercepted and the amalgamation quickly moved the ball downfield through a series of excellent carries and a well-judged crossfield kick before centre Liam McGarry dotted down in the left corner.

Back came Castetroy College and a 14th minute penalty from scrum-half Jack Oliver left just two points between the sides at the break.

Given the wet, greasy conditions which made for difficult ball handling, it was extremely difficult for either side to hold onto the ball for long stages.

Handling errors all too often ended enterprising moves which had promised to deliver more.

Munster CSP increased their advantage in the third quarter, thanks to a sweetly struck drop goal from the boot of out-half Tony Butler.

With the gap at just five points, Castletroy remained within touching distance and a reliable set-piece provided the Newtown side with a dependable supply of good quality ball.

The Limerick side did lack a small degree of composure at a couple of vital stages of the contest, a crucial pass or two not going to hand when they had the opposition defence stretched.

Munster CSP made the game safe in the 64th minute when, following a excellent piece of patient, accurate continuity play, lively scrum-half Ethan Coughlan crossed for a well-executed try.

Under the new format of the competition this season, the competing teams are divided into two groups of five teams each.

Schools are also guaranteed to play at least one further fixture in the New Year in the play-off phase ensuring players will get a minimum of five competitive fixtures in the Senior Cup this season.