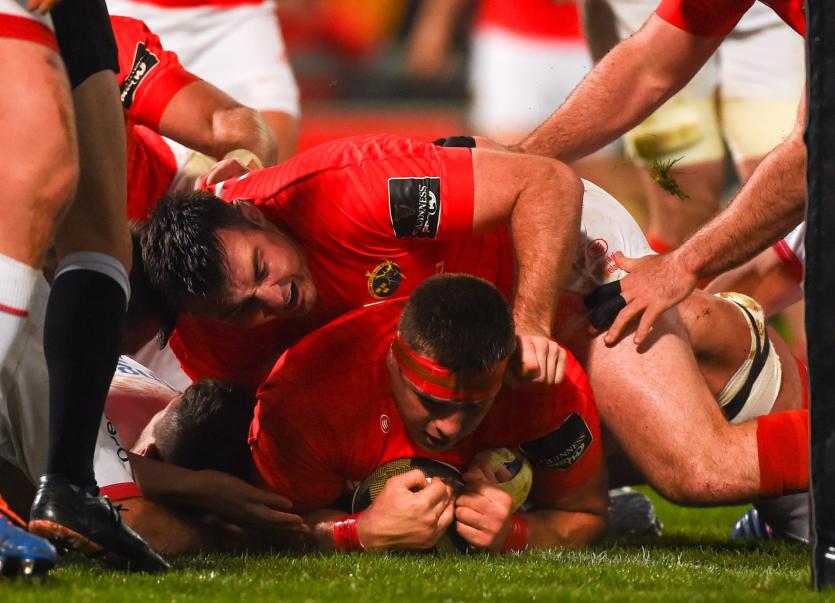 A TERRIFIC individual try from flying winger Andrew Conway helped Munster close out a hard fought 22-16 Guinness PRO14 interprovincial win over a gritty Ulster side in front of an official attendance of 14,436 at Thomond Park on Saturday evening.

Conway showed terrific acceleration and footwork to outstrip the Ulster defence in the 70th minute after being put into the clear by a clever inside pass from replacement out-half Tyler Bleyendaal.

The winger still had plenty of work to do with his side trailing 15-16 when he received possession just inside the Ulster half, but his fine turn of pace took the Ireland World Cup squad member clear of the retreating Ulster defence to score a try to warm Munster supporters on a cold evening.

Bleyendaal duly added the conversion to help the home side into a winning 22-16 lead which proved a winning one.

Munster will have concerns about their discipline on the night with the home side racking up 12 penalties in contrast to Ulster who were pinged just five times by match referee Frank Murphy.

The victory does ensure Munster extend their unbeaten home record in all competitions to 25 games. since Leinster overcame them in round 11 of the 2017/18 season.

Munster have not lost to Ulster on home turf since the 2013/14 campaign.

The win was also a timely one for Johann van Graan's Munster charges who face a trip to Swansea next Saturday to take on the Ospreys in their opening Heineken Champions Cup fixture, 5.30pm.

What a run from Andrew Conway to get Munster back in the lead!

Munster produced the perfect response after falling behind to an early John Cooney penalty for the vsitors. From a scrum five metres from the Ulster line, Rory Scannell took the ball on the crash. Munster quickly recycled and number eight CJ Stander touched down under the sticks. Hanrahan's conversion made it 7-3 to the home side.

@CJStander BOOMS his way into his first Interpro of the season

Ulster responded with a second Cooney penalty reducing the home side's lead to a single point before Hanrahan increased the Munster advantage to four once again, 10-6, with his second penalty of the game.

The Munster playermaker departed the game on the half hour mark after shipping a hefty tackle from Ulster full-back Mark Faddes which match referee Frank Murphy chose not to refer to the TMO.

Munster notched their second try five minutes before half-time as Rory Scannell powered his way over after a sweeping backline move. Replacement Tyler Bleyendaal saw his conversion attempt come crashing back off an upright.

Rory Scannell gets over the line to score the second try on the night.

Munster passed up on an excellent chance to score a third try just before the break, but a line-out failure saw the home side fail to collect possession when only five metres from the Ulster line.

Munster had to be satisfied with their nine point, 15-6, half-time lead.

To their credit, Ulster stormed back into the contest when hooker Rob Herring powered his way over the tryline in the 50th minute from close range. Cooney's conversion left just two points between the sides, 15-13 to the home side.

Visitors Ulster, with the sniff of an upset in their nostrils, hit the front for the first time since the opening minutes when Cooney landed his third penalty goal of the evening in the 59th minute for a 16-15 advantage after Munster were penalised for hands in the ruck.

Indeed, Munster's ill-discipline was certainly an issue over the course of the game. The home side was penalised 10 times in the opening 60 minutes at Thomond Park. In contrast, Ulster were penalised just four times during the same period.

However, if Munster were rattled they didn't show it. A few short minutes after falling behind the home side regained the lead when Bleyendaal found the flying Andrew Conway with a clever inside pass and the speedster outstripped the Ulster defence to score a terrific try. Bleyendaal's straight forward conversion made it 22-16 to the home side.