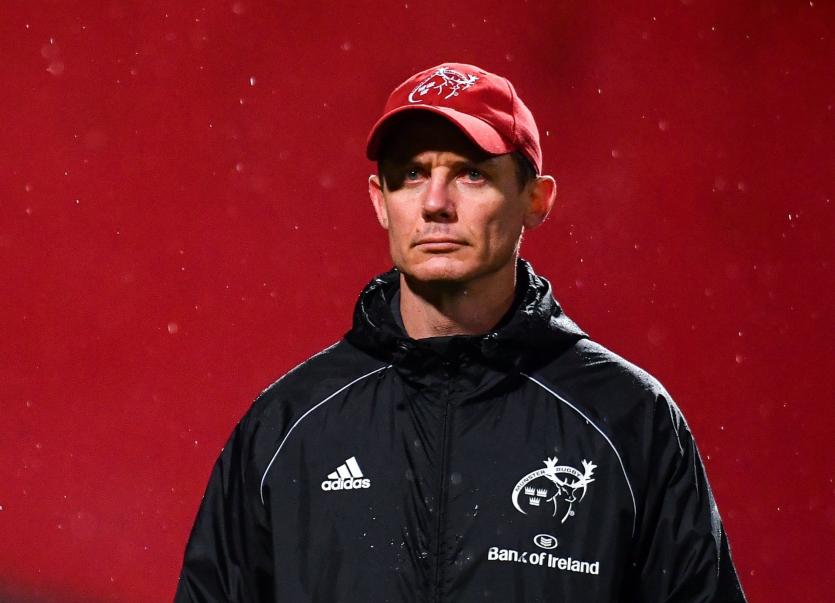 MUNSTER senior coach Stephen Larkham has given an update on the ankle injury which has kept out-half Joey Carbery sidelined in recent weeks at the province's weekly media briefing in UL.

Former Wallaby Larkham revealed that he did not have any estimate as of now as to when the Ireland international play-maker will return to action.

Munster face Ulster in a crucial Guinness PRO14 inter-provincial clash at Thomond Park this Saturday, 5.15pm, before the focus to two rounds of Heineken Champions Cup action beginning with the opening round fixture against the Ospreys at Liberty Stadium on Saturday, November 16.

Asked about Carbery's fitness at Tuesday's media briefing, Larkham said: "Joey is around the boys a lot more now, so he is in doing rehab. We haven't got a long-term or a short-term estimate of when he is back yet.

"The other boys are doing a fantastic job. I think JJ (Hanrahan) had a fantastic game (v Cardiff) and Tyler (Bleyendaal) has been playing really well as well, so we have some good coverage there at the moment which is fortunate for us."

Larkham says his time at Munster has been really enjoyable to date since his arrival at the province during the summer.

"We have obviously had a pretty good start to the season and we have shown improvements every week which is the most important thing when you've got a long season.

"From a rugby perspective it's very enjoyable here, the players respond to everything really well. It is a great coaching group and support staff around the team, beautiful HPC (High Performance Centre).

"I have a nice house that I'm living in at the moment. The family is still not over yet, but they will over soon.

"The weather is starting to turn a little bit, so that's the only thing I have to get used to more than anything else.In Australia right now it is 31 degrees."