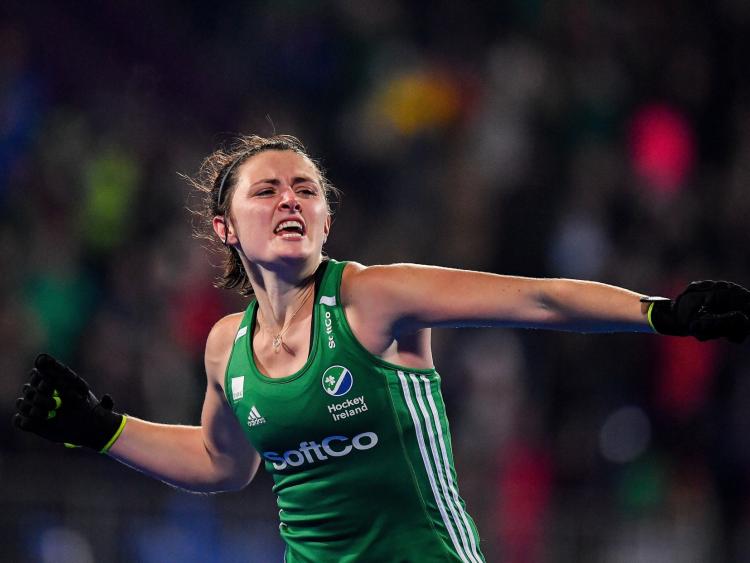 LIMERICK'S Róisín Upton played a starring role as the Ireland women's hockey side qualified for the Toyko Olympics on a hugely dramatic night at Energia Park in Dublin.

Twenty five-year-old Upton converted her penalty in the sudden death shoot out to help Ireland qualify for the Olympic Games for the first time ever.

The Limerick woman showed incredible composure to covert her sudden death penalty after missing a penalty earlier in the shoot-out.

The game had ended in a scoreless draw in front of a record attendance of 6,137 at Energia Park in Donnybrook.

Afterwards a delighted Róisín Upton, who won a silver medal with Ireland at the World Cup in London in 2018 said: "It's surreal. I tried to imagine what time moment might feel like during the week and it's just completely surpasses it 20 times over. It's absolutely incredible.

"This whole experience, everything that we are trying to achieve is so much greater than us, it has been a decade in the making. Legends that I grew up watching, my idols Eimear Cregan, Elaine Brommell, they have all been there, it seems incredible now. I feel so privileged to be part of this team."

Asking by RTE Sport what was going through her mind ahead of taking her second penalty in the shoot-out, Upton said: "My first one (penalty) didn't go to plan, but Sean (Dancer) came over to us as soon as it went to sudden death and he just called out his order of one to five, so when he said number one it filled me with confidence, if he backs me that I will back myself and make use of the full eight seconds and luckily the ball didn't cross the end line there and I snuck it in.

"The atmosphere was incredible. Massive thanks to Irish hockey, SoftCo and everyone, all the volunteers. This is a once-ina-lifetime experience.

"We live and breathe with each other. We have given up so much of our lives, we are family, sisters and we share this passion and this dream and it has been so long in the making, so to get over that line today is absolutely incredible."

Upton said the team's goal at next summer Olympic Games is to win a medal.

"It will be a tough eight months training now, but we are going to aim big, we will be aiming for a medal."

The Ireland Womens' team confirmed their place in this weekend's Olympic qualifier last June in their FIH Series Finals outing in Banbridge which saw the team reach the final of the tournament, narrowly missing out on the overall win to Korea.