WATCH: Mixed day for Limerick clubs in the All-Ireland League 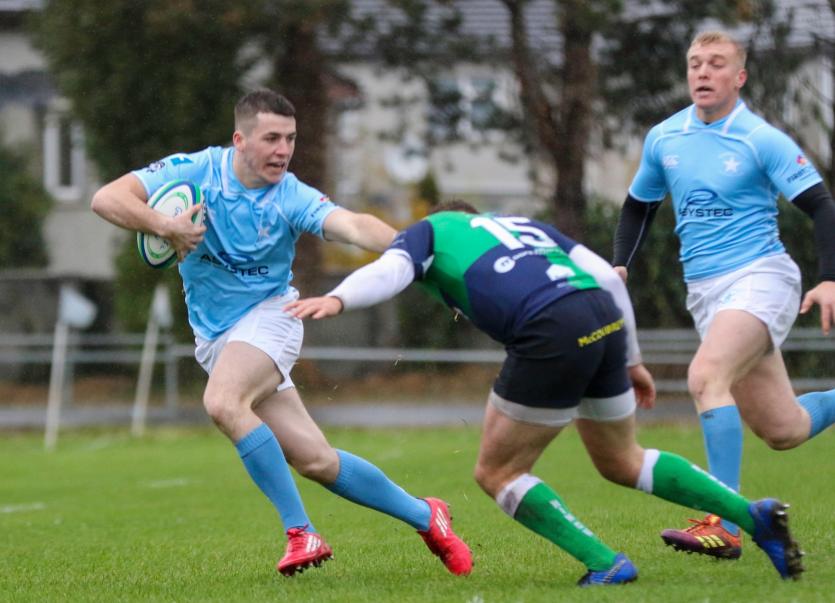 Garryowen tryscorer Paul Clancy on the charge in their Energia All-Ireland League Division 1A win over Ballynahinch on Saturday at Dooradoyle Picture: Kieran Ryan-Benson

THERE were wins for Garryowen and Bruff, while Young Munster drew, on a mixed Saturday for the six Limerick clubs competing in the Energia All-Ireland League.

In Division 1A, Garryowen secured a precious second win of the campaign when scoring a clinical 25-5 bonus point success over Ballyhinch at a rain-sodden Dooradoyle.

The result has jumped the 'Light Blues' up to sixth place in the to flight table.

Near neighbours Young Munster ended their three-game losing start to the campaign when securing a hard fought 9-9 draw with UCD at Belfield.

In Division 1B, Shannon came away from their long trip to Ulster empty-handed after falling to a 14-34 defeat at Banbridge.

Meanwhile, in Division 2A, Old Crecsent remain in fifth place in the table after suffering a 27-12 reverse at the hands of table toppers NUIM Barnhall at Rosbrien.

Also in 2A, winless UL-Bohemian remain rooted to the foot of the table following their narrow 24-21 defeat away to Ballymena.

In Division 2C, Bruff sit in a lofty second place in the table, just two points off table toppers Enniscorthy, after securing a hard fought 17-9 victory over Bangor at Kilballyowen Park.

Garryowen, who had Munster scrum-half Neil Cronin in their starting team, added three further tries in the second half while playing into the stiff breeze and persistent rain.

Centre Bryan Fitzgerald, winger Paul Clancy and finally hooker Rhys Marshall, off a well-executed driving maul in the 72nd minute, dotted down for the home side after the restart to help Conan Doyle's charges claim a maximum five-point haul from the game.

The result is a big boost for Garryowen ahead of next Friday night's trip to Greenfields to take on Young Munster in a crucial local derby.

Munsters', for their part, ended a three-game losing start to the season when claiming two points from their trip to face UCD.

The Limerick side had led the students 9-3 at half-time in Belfield, thanks to three first half penalties from the boot of out-half Evan Cusack.

UCD rallied in the second half in the testing conditions, with play-maker David Moran kicking two further penalties for the home side to ensure a share of the spoils.

Munsters' sit second-from-bottom in the table, three points clear of bottom side 'Hinch ahead of Friday night's big Limerick derby at Clifford Park.

In Division 1B, Shannon sit in fifth place in the table after losing to a Banbridge side which had lost each of their three opening AIL fixtures this season prior to kick-off.

Shannon left themselves facing an uphill battle after falling 24-0 in arrears by half-time. The home side scored three tries during that opening period.

To their credit, Shannon did hit back with two tries in the third quarter from Jamie McGarry and Ronan Coffey, both converted by Billy Gray, to trail by 10 points, 14-24, after 55 minutes.

However, two tries in the final quarter for the home side swung the game in their favour, ensuring Banbridge secured a try bonus point.

Meanwhile, in Division 2A, Old Crescent's 15-point home defeat to NUIM Barnhall at Rosbrien was the Limerick side's second reverse of the campaign.

The Kildare visitors pulled clear in the second half, before Cathal Monaghan struck for a well-taken consolation try for Old Crescent who host Queen's University in the league on Saturday next.

Also in 2A, UL-Bohemian had to be satisfied with taking a losing bonus point from their three-point loss to Ballymena at Eaton Park.

The ninth-placed Red, Red Robins sit two points clear of bottom side Dolphin in the table, while they are six points adrift of eighth-placed Nenagh Ormond.

UL-Bohs' trailed 6-17 at half-time in Eaton Park, with their points in the opening 40 coming courtesy of two penalty goals from the boot of Alan Kiely.

The Limerick side rallied strong in the third quarter with Craig Irwin hitting back with a try for the Annacotty side, while Kiely added the conversion and a penalty to leave them trailing by just a single point, 16-17.

However, a 67th minute try for Ballymena turned the game in the home side's favour once again, before Joe Bennett struck for a UL-Bohs' try three minutes later to give the Red, Red Robins hope of overhauling their hosts at 24-21.

However, that was the way the score remained until full-time.

In Division 2C, Bruff returned to winning ways after rallying strongly in the second half to score a hard fought eight-point victory over Bangor.

A home win looked unlikely as Bruff who trailed 0-3 at half-time, fell 9-0 in arrears into the third quarter.

However, Eoin Cahill's side hit back. Kevin McManus began the fight back with a penalty goal, before prop Jack Fitzgerald dotted down. Try was also converted and suddenly the home side led by a point 10-9.

A second Bruff try, from substitute Patrick Maher, which was also converted, sealed the win for the South Limerick side.