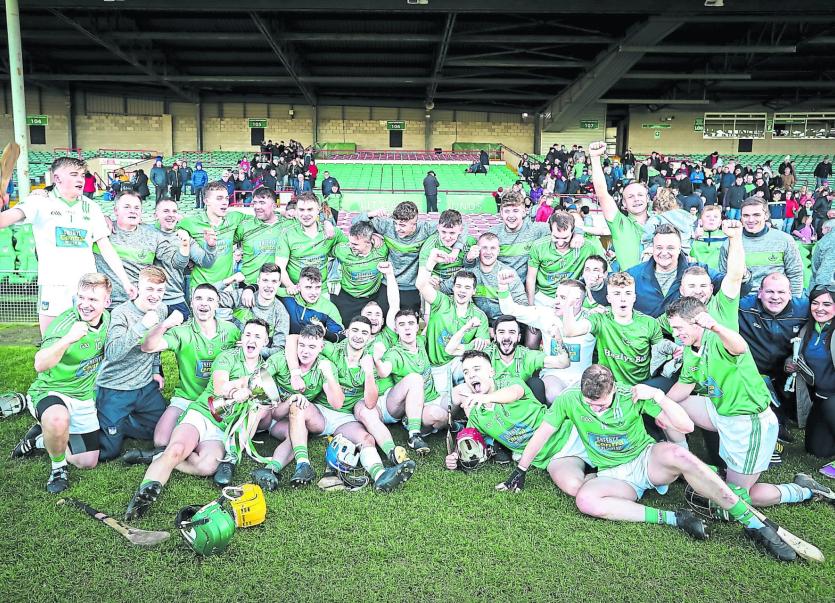 And, Blackrock have home advantage for their Munster club IHC quarter final tie – welcoming Cork’s Fr O’Neills to Kilfinane this Sunday November 3 at 1.30.

Victory would see The Rockies off to Clare for a semi final tie with Broadford.

While the Kilfinane-Ardpatrick men have just a week of a turn around after defeating Kildimo-Pallaskenry in their county final replay, long serving full back Richie McCarthy insists they will be ready for the visit of the Cork side.

“With Jimmy Quilty in charge he will only give us a few nights and we will be back training and all guns blazing for that - especially when it is in Kilfinane,” said McCarthy.

“I didn’t realise until a couple of weeks ago that the carrot was to play a Munster club game at home, which is very special for the people of Kilfinane who have supported us and for our families - it is going to be a special occasion,” he stressed.

McCarthy was loud in praise of the role of manager Jimmy Quilty, who returned to his native club this season after departing from John Kiely’s Limerick senior management this time last year.

“I was thinking during the week that anything he touches he brings success - he had his time up in Cork, with Limerick U21s, Limerick seniors and with us. He just drills it in your and gives you so much confidence going out onto the field,” said McCarthy of Quilty.

“He brings such good gameplans because he goes to so many games and susses out the opposition - what a serious coach and a serious man. He is a Blackrock man and he put his heart and soul into it this year with us.”

On Sunday, McCarthy, Quilty and Blackrock welcome a strong Fr O’Neills side to Kilfinane.

The Cork champions are backboned by five players who won a Cork SHC medal with divisional side Imokilly – Declan Dalton, Ger and Joe Mellerick, Mark O’Keeffe and Dan Harrington.

Richie McCarthy is hoping that the Limerick Premier IHC campaign will stand Blackrock in good stead.

“This Premier Intermediate is the best competition in Limerick in my opinion - it’s about a bit of momentum. We only had two points out of six but once you start to win you get momentum and this is where it has come to,” he said of their title win and promotion into the senior ranks.

“There are a lot of fellas like myself who have been around the block a good couple of years and we might be an aging team but I think it’s the right time for us to go up and we will be competitive next year but we have to enjoy this as well.”

But promotion up senior was the main target.

“When I started off playing with Blackrock we were a junior team and your aim is always to get up senior so this is a special day.”

He added: “We are around the block a long time”.

“Kildimo-Pallaskenry are a serious team and hadn’t lost in the group stage - that’s their only defeat of the year and what a time to do it to them. They are a serious outfit and won the intermediate a couple of years ago and have a young team.”

It was a final quarter blitz that saw Blackrock crowned champions.

“I am so relieved - what a battle out there. It wasn’t looking good at half time when we were two points down but we knew we had the wind in the second half. We didn’t start the second half so well but what a finish. We got the goal at the right time and between the two games there was just the goal and we got it at a vital stage,” recalled McCarthy of their 1-18 to 0-16 replay win.

“Up until 10-minutes into the second half they were always that two or three points up so that goal was vital. Fair play to the sub Colm O’Keeffe, he is just 18 years of age - what a goal,” outlined Richie McCarthy.