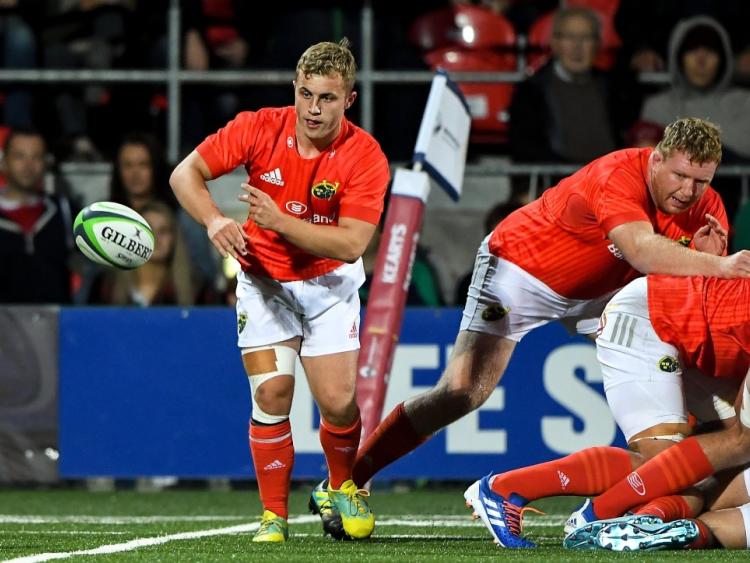 Scrum-half Craig Casey gets his pass away for Munster

MUNSTER head coach Johann van Graan has been impressed with the impact highly rated young scrum-half Craig Casey has made through the opening weeks of the season.

Twenty year-old Casey came off the bench to make his first Guinness PRO14 appearance of the season duringn the second half of Munster's bonus point victory over the Ospreys at Musgrave Park on Friday night.

It was only the Shannon clubman's second ever appearance for Munster in the Pro14, following his debut appearance against Connacht at Thomond Park last April.

Munster head coach Johann van Graan said: "Once Craig knew that he was going to play (on Friday) he wanted to play on Monday already, but it’s great to have Craig in the squad.

"There is a big future for him ahead. I think what’s been brilliant about the squad is the communication, everyone knows when they are going to play.

"He knows he is battling with a few other nines and he has to seize his opportunity and I thought he did that well again tonight. There was nine points in it when he came on to the field. He brought a lot of energy to it but the thing I was impressed the most with was his execution, that box kick and crispness of his pass.

"I said to the squad that it’s important that you integrate young players into your squad. That’s why I went with Jack O’Sullivan in the starting team together with Tommy and Jack O’Donoghue and from the bench we had Arno (Botha), Craig Casey and JJ (Hanrahan) to make sure we give them the best possible chance of making a different.

"It won’t always turn into the perfect picture but we’re very happy with him."

Munster return to Guinness PRO14 action this Saturday evening when facing the Cardiff Blues in Cardiff Arms Park at 7.35pm.