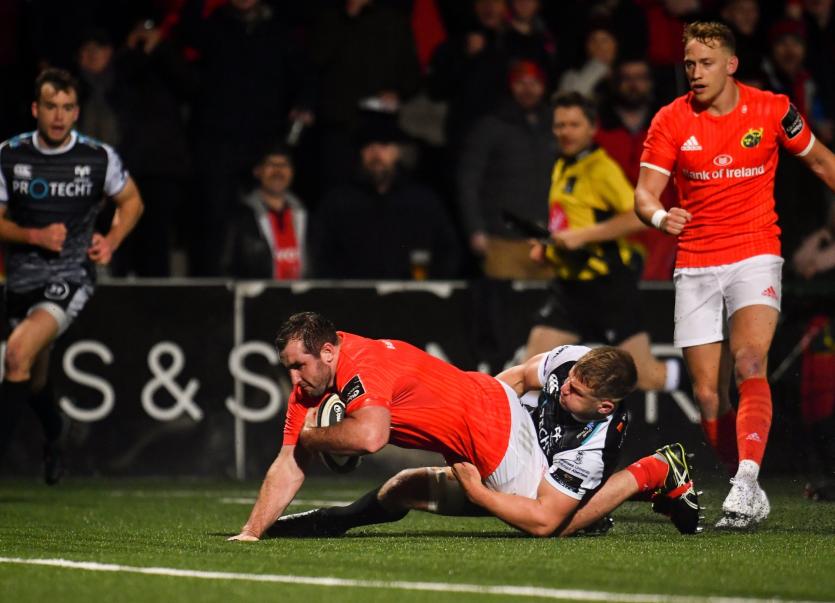 MUNSTER won the first of two crucial fixtures against the Ospreys in just three weeks when easing to a 28-12 bonus point victory in their Guinness PRO14 clash at a wet Musgrave Park on Friday night.

Johann van Graan's Munster charges will renew rivalry with Welsh region Ospreys in the opening round of the Heineken Champions Cup at the Liberty Stadium on Saturday, November 16 at 5.30pm.

The make-up of both sides for that game is likely to change significantly as Munster's Ireland internationals who have been on World Cup duty will be available for selection as will the Ospreys' contingent of Wales' internationals.

Asked how he felt Friday night's game at Musgrave Park would impact their upcoming Champions Cup pool fixture with Ospreys, Munster head coach Johann van Graan said: "Look, it is obviously the same coaching staff. Obviously, you want to win every single game, but we have a lot of respect for them. Once we get into Europe what happens tonight won't really matter.

"Obviously you kinda feel each other out. Both sides see the other guys shape and general line-out movement, the way you maul and scrum. That is a different competition on a different day.

In terms of Pro14, like I said, it is important that you win your home games which we did and a bonus point helps every time."

Van Graan said that while defence remained the DNA of the Munster side, he is pleased with how their attack is evolving under new senior coach Stephen Larkham.

"I thought we did some very good things in attack, some very nice off-loads. I think what will be key for us going forward into the winter months is the balance.

"I thought we forced one or two offloads at one stage, but we are not looking at it from an error point of view. We said listen, where do we want to end up and work back from there.

"Some of the stuff was really, really good, I thought some of the passing of the forwards, the interplay was really nice. It is something we have worked on since  the start of the pre-season, so you have to develop your game, like I said keep your DNA in place, buy you know, it is nice to see we are moving forward."