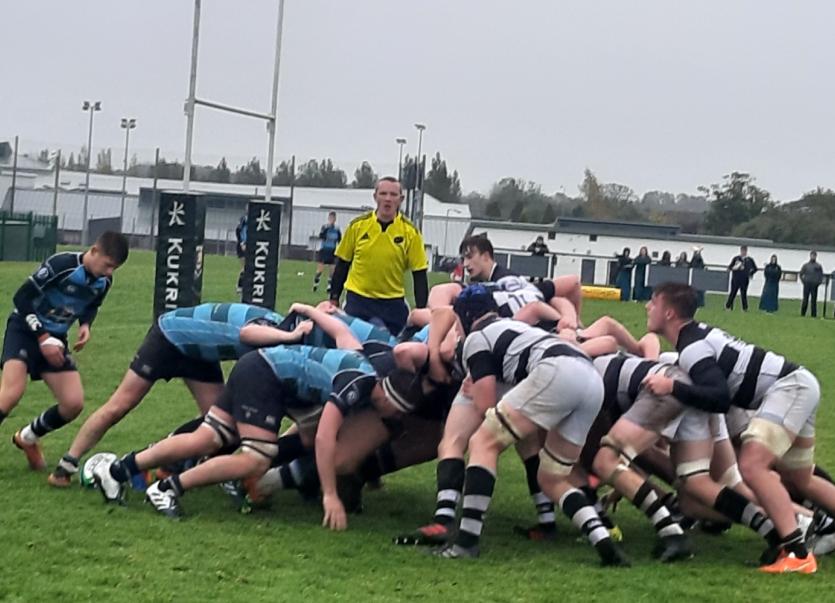 Castletroy College's Jack Oliver about to claim possession from the back of a scrum during their clash with PBC, of Cork, in the Clayton Hotels Munster Schools Senior Cup in Castletroy on Wednesday

The result ensures that Castletroy College remain unbeaten after their opening two fixtures in this season's new-look Senior Cup.

The Newtown school had opened their Group A campaign with an impressive 18-7 victory away to Bandon Grammar School in West Cork.

Castletroy College will be the more pleased to have come through Wednesday's hard fought fixture with a share of the spoils against a Pres' side who are fancied to be in the shake-up for Cup glory next March.

This was a far more entertaining game than the scoreline might suggest. Both sides would certainly have opted for a kick at goal had this been a knock out fixture rather than choosing to kick to touch when scoreable penalties were awarded during the game.

The Cork school, having their first outing of the campaign, did enjoy a greater amount of possession over the 70 minutes, but Castletroy's resolve and resilience was hugely impressive.

The home side tackled tenaciously throughout in the wet and slippery conditions, while their set-piece, both scrum and line-out, functioned well.

Hugely influential half-backs, Jack Oliver at nine, and the recently returned-from-injury Michael O'Hanrahan at out-half, controlled the game exceptionally well, both players using possession intelligently and pinning their opponents back at every opportunity.

Each of the Castletroy forwards contributed handsomely to this win, rolling their sleeves up and showing a huge appetite for work. A high workrate up front was always going to be crucial in the wet conditions and given the physical size of the visiting forwards.

It was always going to be an arm wrestle of a contest given the unfavourable weather conditions which made good handling and any decent continuity play extremely difficult.

The Castletroy forward effort was all the more impressive given that the home side suffered two unfortunate injuries in the pack over the course of the game.

Centre Sam Hanrahan was also highly influential for the home side, both with ball in hand and defensively.

Each competing school will play four round robin fixtures before Christmas in the new-look Clayton Hotels Munster Schools Senior Cup with the knock-out phase of the Cup beginning in the New Year.

Castletroy College now have two fixtures remaining in Group A of the Senior Cup.

Next up for the Limerick school is a November 13 date with amalgamation side Munster CSP at UL 4G rugby pitch at 6.30pm, while the round robin phase is completed with a November 26 meeting with local rivals Ardscoil Ris.