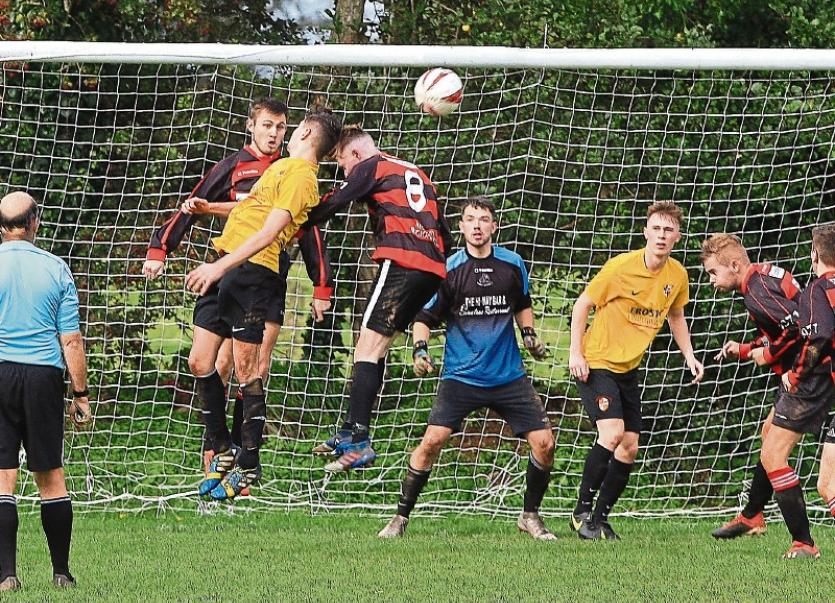 It's a mixed bag in this week's Junior Soccer fixtures with the FAI and Munster Junior Cups attracting most attention. In the FAI Cup it's mostly outstanding round two games, but one round three game sees Ballynanty Rvs host Charleville in LIT.

The two teams come into the tie with contrasting results from last weekend. ‘Balla’ picked up three valuable points in a 3-2 win over Regional while Charleville bowed out of the MFA Cup on the same scoreline to Newport on Saturday evening.

‘Balla’ were far from their best despite the result and need to iron out a few issues particularly in the middle of the park.

If they sort this, they will be serious contenders for any competition.

Charleville's young side will find it tough going but they are an eager bunch and should be treated with respect or they will punish you.

Hill Celtic will enjoy the chance to lower the colours of Premier League champions Janesboro in Hogan Park. We are all aware of Janesboro's travails and a 3-0 defeat to St Michaels last Sunday only added to the pain.

However, the champions are still a good side and will not be cowed by any side. A good run in the FAI would be a great boost to the club.

Prospect Priory face a sticky proposition at home to Patrickswell but should have too much in the tank for the Division 1A side.

Fairview Rangers ‘A’ hit Coonagh for seven last weekend and Carew Park cannot be looking forward to a trip to the Fairgreen. Carew Park are in a rebuilding phase and have steadied the ship but may find the Blues too hot to handle. In other FAI games Dromore FC host Northside and Cappamore welcome Caledonians to the County venue.

Most would have thought Aisling would prevail when this draw was announced. However, a 3-0 defeat to Mungret last weekend may have dented the confidence of the Premier side. Shane Clarke was missing for that defeat and his return will bring with it a boost to the confidence.

They take on a Fairview side full of self-belief. They have been superb this season with an exciting bunch of young players. They will not fear Aisling and with nothing to lose could make life difficult for Mike Aherne's side.

Another Premier side facing a difficult task are Geraldines who visit Kilfrush. The County side have hit form at the right time and with the return of Tyrique Leamy McNamara to the side have further boosted their firepower.

Geraldines are in great form and all being right should progress but if they go into the tie anyway complacent they could pay the price.

Pike Rvs will be expected to ease through against Athlunkard Villa’s Bee string while Regional Utd A host Hyde Rgs in the final tie.

Regional were very good versus Balla last Sunday despite going down 3-2. They meet a Hyde Rgs side also in great form. Consecutive wins over Holycross have seen them progress in the Munster and FAI Cups and they will treat this game as a bonus to their goal of promotion.

The only Premier League is focused on the bottom half of the table when Kilmallock take on Coonagh Utd in a relegation six pointer.

Kilmallock recorded their first win of the season last Sunday v Aisling B and will be looking to build on that. They meet a Coonagh side trying to pick themselves up after a hiding to Fairview last Sunday.

One game in the Premier A League worth a visit is the clash of Athlunkard Villa and Moyross in Lee Estate.

Tomorrow (Thursday) evening we attempt to kick off the Tuohy Cup again when Ballynanty Rvs take on Mungret Reg at 7.00pm in Jackman Park.

Following their impressive 3-0 win over Aisling on Sunday, Mungret's young guns will be hoping to continue their good run but will find Balla a tougher proposition.