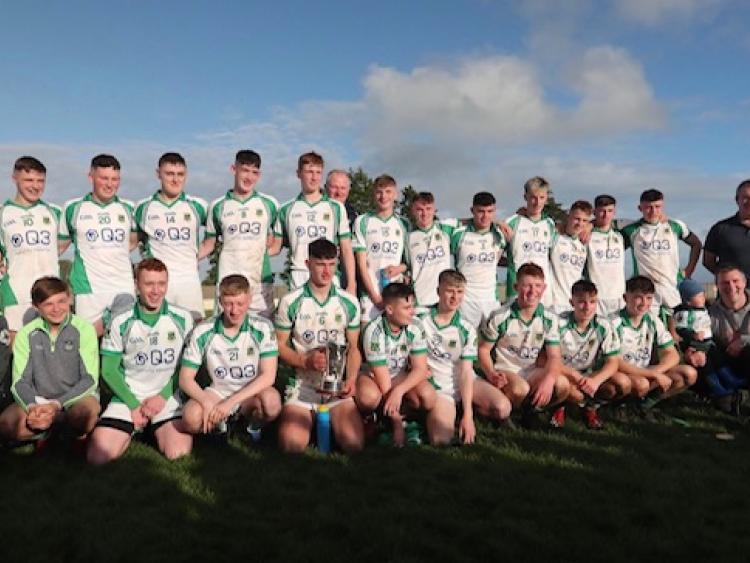 BALLYBROWN ended their 31-year wait for a Premier Minor Hurling title as they defeated Doon by six points in an intriguing final in Bruff. (Final Score: BALLYBROWN 0-18  DOON 0-12)

The heavy pitch was ignored by both sets of players who gave an exhibition in score-taking and catching, with Ballybrown’s defensive work arguably the difference. Aidan O’Connor was on top form at the other end, finishing the hour with 10 points, while Josh O’Reilly pulled off two outstanding saves to deny Doon a goal. Indeed, Ned Quinn, at full-back, stopped another goal-bound shot, with Doon’s slow start proving costly.

For the Clarina outfit, victory adds to the Minor and U21 ‘A’ titles secured in 2018 and 2019 respectively, as they had too much firepower for the east Limerick men. A blistering start, with O’Connor to the fore, saw Ballybrown 0-8 ahead after 19 minutes of play. Six from O’Connor with three from play, with the lively corner forwards Luke O’Connor and Ethan Keyes also on target.

For Doon, but the first goal chance saw O’Reilly deny Daire Ryan from point blank range, before Bob Purcell finally found a point for his side, which was followed by a well taken free. Purcell, at centre-forward, was embroiled in a titanic battle with Colin Coughlan, and Doon looked for him regularly during the game.

Ballybrown Captain Conor O’Neill was next to find the target, on 22 minutes, before Barry O’Connor re-established the eight point margin. Eddie Stokes and Luke O’Connor traded scored before Ned Quinn denied Daire Ryan a certain goal with a block on the goal line.

Doon were to finish the half on top, with Adam English and Cian O’Donovan firing over from range while Stokes added two more, to leave it 0-11 to 0-9 at the change of ends.

Adding just three second half points was never going to be enough for Doon, with Aidan and Luke O’Connor on target again, before Ross Kenny got in on the act in the final quarter. Ballybrowns dominance at midfield was clear, though credit too must goto defensive duo Lee O’Reilly and Eoghan Kelly who defended gamely, with Quinn and ‘keeper Josh O’Reilly impressive throughout.

Aidan O’Connor, who was Limerick’s second highest scorer on route to a Munster U17 title this summer, rounded off the scoring during a second half that saw those in white hit eight wides compared to just two from the men in red.

Cormac Ryan looked to have scored a goal on 60 minutes but O’Reilly thwarted him with another exquisite save. The margin of six points may appear harsh on Doon, who were unable to raise a green flag for the first time this season, having scored 16 goals during their eight previous games. Ballybrown had 22 goals during their unbeaten run, and a failure to add to this mattered little as their point scoring prowess saw them over the line.