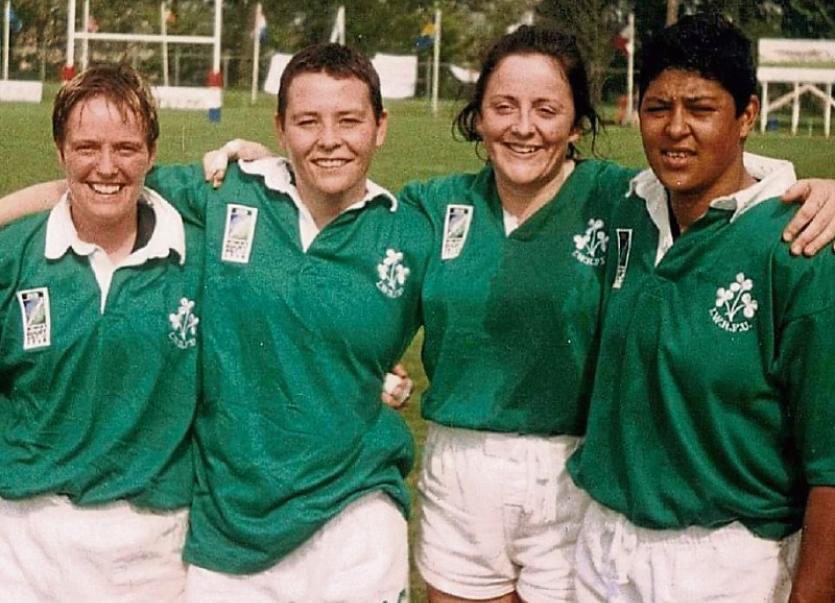 But the bare facts on caps won doesn't even come close to doing justice to Jackie McCarthy-O'Brien's decorated sporting career.

The resilience the Kileely native showed in overcoming adversity sets her apart from many of her peers. She took a road less travelled to the very pinnacle in two major international sports.

Jackie McCarthy O'Brien was born to a Jamaican father and Limerick mother in Birmingham.

When she was just six months old, her mother came back to Limerick to live. Growing up in the sheltered, conservative Ireland of the 1970s and 1980s wasn't always easy.

Jackie McCarthy-O'Brien explained: “My mother is a Limerick woman. My birth dad was a Jamaican, but I never met him, so my mother came back to Limerick when I was six months old and we lived and grew up in Kileely.

“She met and married my dad Mickey O'Brien and we had a local grocery store there. He was very much involved in sports, he was an All-Ireland handball champ and a great soccer player.

“I think he recognised that for me, being a black child growing up in Limerick, I was going to get a bit of a tough time and encouraged me in terms of sport.

“I started playing soccer and handball and was an all-round 'Tom Boy'  when it came to sport.

“It was a great leveller. If you are any good at sport in Limerick they take you to their heart and once I was good at the soccer and whatever, it took away the shyness and people started recognising you for the right reasons rather than just the colour of your skin.”

There were some difficult days along the way, but one of her old primary school teachers remained a beacon of light.

“I was so fortunate to have a very special school teacher, Rita Spring, in St Munchin's Girls School in Ballynanty.

“I dedicated every cap that I got to her because I always felt she was there alongside me, encouraging me to do the best I could and to keep my head.

“It wouldn't have been easy growing up a black child in Limerick if I hadn't played the sport.

“Rita, who was a Kerry woman who developed a great love for Limerick, passed away three years ago but she came and watched me playing for the Ireland women's rugby team in a match we played against England in Garryowen. She was always a big supporter.

“I would go as far as to say that she saved my life by getting me involved in sport. That is the truth of it.”

“I played soccer from the age of 11 until I was 33 years old when I retired.

“I got to play for Ireland on 13 occasions between 1983 to 1994. My first cap against Northern Ireland was in Chimney Corner FC in Antrim. On and off, over the course of having three children, I was in and out of the team, but still played every season from 11 until 33, even after having the children.

“It was amateur, we payed for everything, shorts, socks, paid to go to Dublin. It was an honour, we all wanted to play for our country.”

After hanging up her soccer boots, Jackie wished to keep her fitness levels up. One night, she headed out to Rosbrien with the intention of taking a fitness session at Old Crescent. But it's funny how things can take a twist of fate.

I went out to Crescent to do some coaching from the fitness side. Someone else also turned up on the night and I thought rather than stand on her toes, I will just fall in to play.

“I didn't know much about the game but I loved watching it. Being 5' 10" and light enough, they threw me into the second row. I started there and then and was told I was playing next week, even though I said I didn't have a clue. I was told I'd be fine!

“I fell in with the team. Within six months I came to the attention of the Munster coach and made the Munster team for the interprovincials. In all, I got to play with Munster for four seasons and captained the Ireland 'A' side for a season.

“On the weekend they took place the Irish manager was present and he came to me, spoke to me and asked me how I would feel about playing for Ireland. He asked me if I had about IR£4,000. I thought he would be paying me, but he said that is what the season would cost.

“I was back to square one like the soccer with paying for the gear, going to Dublin and all of that, but I was over the moon!

“I made the Irish team and went on to play for four seasons, played in the European Championships which was played over two weeks in Nice. I was lucky enough to be selected for the 1998 World Cup and managed to score a try against the Netherlands.

“I played my very last match coming up on my 40th birthday in Thomond Park. I started with Old Crescent. After a time that team folded and I got to go and play with Shannon which would have been my team anyway.

“In my last game we won the All-Ireland League with Shannon. That was everything achieved.”

Among the highlights of her rugby career was an appearance on RTEs the Late, Late Show.

“I suppose with the Late Late Show there was partly an angle of being the black person teaching the Exiles on the Irish team the words of Amhrán na bhFiann. I had grown up in Limerick, we had a number of girls coming from England to play. Rugby was more structured there.

“These girls were of Irish descent and had Irish parents living in England, but wouldn't have learned the National Anthem and they had me, a black woman, teaching it to them. I think they found it funny that I knew the words of it and some of my own team mates didn't.

“We had driven up to Dublin to appear on the Late Late Show. We got back home to Limerick at about 2am from that and then we had to tog out and play what was in effect a team of professionals in England the next day.

“It was a fantastic time and what I didn't achieve in soccer by not qualifying for a World Cup or European Championships, I ended up doing it in rugby. It was a dream come true.”

Look out for Jackie McCarthy O'Brien on the 'Ireland's Ball' campaign involving the creation of a unique rugby ball with a bespoke grip containing the fingerprints of 32 different people from every county in Ireland, more at